Apart from its sprawling arid plains, Afghanistan is home to fertile farmland intersected by irrigation canals, soaring mountains and plunging... 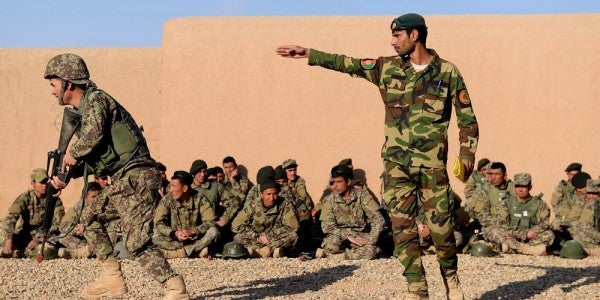 Apart from its sprawling arid plains, Afghanistan is home to fertile farmland intersected by irrigation canals, soaring mountains and plunging valleys. But the country is also home to a resurgent Taliban engaged in heated combat with the Afghan National Army, the latter of which has been wearing expensive — and, it turns out, pointless — woodland camouflage uniforms for the last nine years.

Forests account for just 2.1% of Afghanistan’s total land area, according to a newly released report from the Office of the Special Inspector General for Afghanistan Reconstruction, which makes the ANA’s woodland camo a 98% stupid choice for the campaign against insurgents across the country.

Even worse, the pattern “selected without determining whether it was appropriate to or effective in the Afghan environment,” but the DoD blew approximately $93.81 million on the uniforms — way more than necessary.

“Using a proprietary camouflage pattern and a different uniform style resulted in significantly higher costs—up to 43 percent higher—than other uniforms that DOD procured” for other Afghan commands, according to the report.

The DoD procured the rights to the Spec4ce Forest Uniform camouflage pattern from HyperStealth Biotechnology Corporation for the Afghan government, even though there were already had similar patterns available. Here are some of the options already owned by DoD, which could have been used at no additional cost:

For years, the ANA’s conventional soldiers had been donning uniforms nearly identical to the U.S. Army’s Woodland Battle Dress Uniform. In May 2007, someone at the DoD decided that the ANA needed a new look. The replacement process apparently began with a quick perusal of the HyperStealth website and didn’t go much further than that.

Apparently, then-Afghanistan Minister of Defense Abdul Rahim Wardak “ran across” HyperStealth’s website and “liked what he saw,” according to the SIGAR report. That quick online search resulted in the purchase of 1,364,602 new uniforms between May 2007 and January 2017.

What’s more, the procurement was made without any formal testing. If the pattern had been field tested, maybe the military would have steered clear of that forest pattern. But apparently “neither the DoD nor the Afghan government could demonstrate the appropriateness of the ANA uniform for the Afghan environment, or show that the new camouflage pattern did not hinder ANA operations by providing a more clearly visible target to the enemy,” according to the report.

“Given our historical and pledged commitments to the ANA, SIGAR estimates that changing the ANA uniform could save U.S. taxpayers between $68.61 million – $72.21 million over the next 10 years,” the report concludes.

While they’re at it, the Afghan military and their American partners might want to consider switching over to a desert pattern. Just a thought.