It may be almost a decade old, but this leaked Delta Force training video is what aspiring ass-kickers walking into... 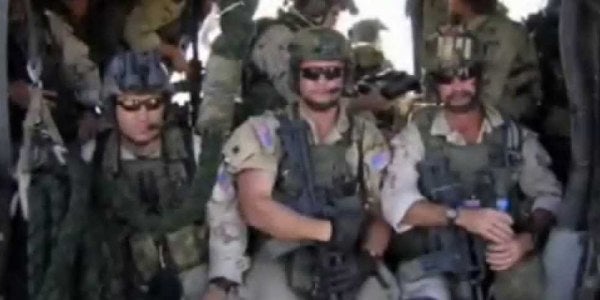 It may be almost a decade old, but this leaked Delta Force training video is what aspiring ass-kickers walking into a recruiter's office dream of.

Leaked at the height of the Iraq War and a year after the 2007 troop surge under then-President George W. Bush, the eight-minute video clip is, according to We Are The Mighty, one of the only publicly available videos showing training from 1st Special Forces Operational Detachment-Delta ― the elite operators are seen touting the weapons, gear, and tactics that make them among the most lethal warriors in the U.S. military.

And boy, this video has everything: quick-draw gun antics, aggressive tactical driving, high altitude jumps, some sniping from helicopter doors and, last but not least, highly trained, would-be Deltas breaching every structure in sight. Oh, and it's scored to AC/DC's Shoot to Thrill?!?!?! SIGN ME THE FUCK UP!!!

Most impressive, at least to some Delta Force fans, is the hostage rescue scenario that occurs around 2:13 in the video. According to retired Delta Force operator Eric Haney's Inside Delta Force: The Story of America's Elite Counterterrorist Unit, this is the 'final exam' of sorts: Each aspiring Delta takes turns playing the hostage while his comrades conduct a live-fire assault on the shooting house, a deadly interpretation of the civilian trust-fall.

“Pass, and it's just another training day,” Haney wrote. “Screw up, shoot and kill a friend, and you fail.”

According to We Are The Mighty, rumors circulated among the military and veterans community as the time of the video's publication suggesting that the video was leaked by Delta Force itself to bolster recruiting amid increasing burnout and casualties incurred during the opening years of the Global War on Terror. And if that's the case, the 1st SFOD-D did a damn fine job: Almost a decade later, I'm about ready to drop my keyboard and join up this instant.