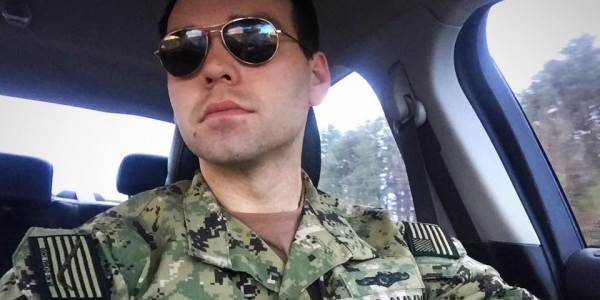 If you know conservative activist Jack Posobiec’s name at all, it’s probably because he was retweeted by President Donald Trump last week, when he implied that the public furor over a neo-Nazi rally in Charlottesville was driven more by the media’s biases than sincere concerns about street violence.

Or you might know him because he was publicly accused of disguising himself, infiltrating an anti-Trump inauguration-day protest in Washington, and carrying a “RAPE MELANIA” sign so he could allegedly record the incident and blame it on protesters. (Those allegations are “totally false,” he says.) Or you may know him from his role in “pushing” pro-Trump conspiracy theories suggesting the DNC ran a human-trafficking ring out of a Washington pizza parlor and murdered a staffer for leaking internal emails. You may also be familiar with his key role in “#Macronleaks,” in which he publicized leaked data on a liberal French presidential candidate that was amplified by bot accounts, some of which may be Kremlin-connected. Or from his firing as the sole Washington correspondent for a Canadian alt-right website amid allegations he’d plagiarized a video script from a white supremacist.

What was less well-known about Posobiec until today is that in addition to being an outspoken leader of the radical Trump right, he is an intelligence officer in the U.S. Naval Reserve, who for years was cleared to handle some of its most sensitive compartmented information. That is, until this year, when his security clearance was suspended.

Posobiec took a break from a Seattle protest he organized Aug. 16 to give Task & Purpose an extended interview. He discussed the particulars of his service, as well as many of the allegations that have been leveled against him by critics — and threats he says he’s faced from shipmates and members of his chain of command over his politics. “I have never spoken out publicly about any of this stuff,” he said, “because of opsec and because of professionalism.”

Posobiec, a Philadelphia-area native, entered the Navy Reserve as an intelligence specialist in 2010 and was commissioned as reserve intel officer in 2013, according to service records provided to Task & Purpose under a Freedom of Information Act request. For the past five years, he also worked in a day job as a civilian analyst for the Office of Naval Intelligence — until early last spring, when he lost his clearance to work with sensitive compartmented information.

According to a former colleague of Posobiec’s who spoke to T&P; on condition of anonymity, the prolific social media poster was said to have left ONI “when his clearance got pulled for sharing classified information on Twitter.”

The Navy’s account differs from Posobiec’s. “I can confirm that his clearance has been suspended,” Cdr. Doug Gabos, a public affairs officer for the Navy Reserve Force, told Task & Purpose in an email. “I don’t have any additional information as to why.” (Gabos emailed Aug. 17 to clarify that while Posobiec’s access to classified information was suspended, his clearance was “under review.”)

“First I have heard,” Posobiec texted me when informed of the Navy’s comment. He was able to shed some light on the “why,” however. “It had to do with using my Twitter account,” he said. “I don’t know how much I can talk about… They said somebody made a complaint against me.” He doesn’t know what the complaint was about: “I’ve requested information, but no information’s been given.”

Since his tweet was picked up by the president last Saturday, critics have scrutinized Posobiec’s service, arguing that his inciteful commentaries and signal-boosting of incorrect or incomplete pro-Trump news demonstrate conduct unbecoming of an officer, much less a cleared intelligence professional. He’s been accused of exaggerating his service record, saying he’s a veteran of multiple deployments, when his personnel file lists only one, a 10-month hitch performing human intelligence analysis for Joint Task Force Guantanamo Bay. But Posobiec says that he deployed as an ONI civilian multiple times, a claim backed up by former colleagues — though, he adds, “I can’t comment on those” deployments.

Other claims seem shakier. Posobiec has long identified himself as a former “CBS News producer.” When I asked what he did at CBS News, he clarified that he worked at WPHT, a Philadelphia-based AM station owned by CBS Radio, as an intern in 2006 and a sales executive in 2011.

Former coworkers of Posobiec’s also gossiped at one point that he had taken leave from an overseas ONI deployment to travel to a place he owned in the Caribbean. “I don’t own property anywhere,” Posobiec said. “Maybe they’re talking about my Guantanamo deployment.”

The most significant charges against Posobiec center on his role in “Macronleaks” — a term he coined in his earliest social media postings about the leak. On May 5, two days before France’s presidential election, Posobiec found a dump of election-eve emails on 4chan that purported to show information embarrassing Emmanuel Macron, the center-left candidate. (Posobiec and President Trump’s preferred candidate was Macron’s losing opponent, the far-right nationalist Marine Le Pen.)

“That was the biggest scoop I’ve ever had in my career as a journalist,” Posobiec told me. Shortly after flagging the data dump on Twitter with the hashtag #macronleaks, Posobiec watched as it was retweeted thousands of times and picked up by conservative news outlets. However, analysts say much of that rapid reception was propelled by bot accounts, not real people, many of them aligned with Russia and with Wikileaks. The Atlantic Council’s Digital Forensic Research Lab concluded that Macronleaks was basically an information operation, “pointing to yet another attempt to skew democratic elections in a Western country.” (Posobiec has dismissed that analysis as biased, tweeting that the Atlantic Council “is funded by liberal globalist and Wall St billionaire George Soros.”)

How did he verify and publish the Macronleaks files so quickly after finding them on 4chan? “It wasn’t very quick,” he said: He ran them by a cyber-expert friend who he didn’t name, and flagged them publicly after he was satisfied they were legit. (In an earlier interview with The New Yorker, Posobiec appeared to concede that he could not verify the entire trove; it was nine gigabytes of data, running, the magazine said, to “thousands of pages.”)

Was he taken aback by the rapid social media furor after he publicized the leaks?

“Not really,” he said. “I have an extremely popular Twitter.”

No one in Navy intelligence, Posobiec said, has ever questioned him at work about his involvement in stories like Macronleaks. But he said “a toxic environment” contributed to his decision to resign from ONI, where his overseas postings were mainly in the Pacific area of responsibility. (He previously spent two years after college working in China and is a fluent Mandarin speaker.)

Some shipmates and “certain members of my chain of command” made Posobiec feel singled out over his support for Trump. “I felt very threatened, yes,” he said. “Terrified, to be honest.” He adds that he and other #MAGA fans were “persecuted” by coworkers: “They’d say ‘Trump supporters are idiots,’ knowing I was a Trump supporter right there next to them.” Posobiec says he filed a complaint with the department’s inspector general, but it didn’t go anywhere. (ONI declined to comment for this story.)

Other Trump-backers, he adds, “would reach out to me in closed circles” to offer support. “That happened pretty often,” he says. Eventually, he quit that job to go into media and activism full time, “also in February” of this year — when his security clearance was first put on hold.

Posobiec “seemed like a happy enough guy,” one former colleague at ONI told T&P.; “I took no issue with the quality of his work.” But, the colleague added, Posobiec’s politics were well-known to coworkers. “He liked Trump a lot but mentioned his ‘dream team’ would be Trump as POTUS and Sanders as VP,” the colleague said. (Posobiec’s public postings have displayed both support for Sanders and criticism of him.)

As a rabble-rousing, attention-getting nationalist partisan, he doesn’t mind the media scrutiny over his activities — “I’m kind of used to it,” he says — but he was angered that he became the story after Trump’s retweet.

Posobiec also thinks he’s being unfairly lumped in with the neo-Nazis and white supremacists who roiled Charlottesville last weekend. “These guys are extremist scumbags. I disavow everything they’ve ever done,” he says. Indeed, Posobiec and some prominent white-right leaders have bickered publicly and staged rival rallies in recent months, and there’s been a schism of sorts between right-wing activists and the overt racists; white supremacist Richard Spencer has derided Posobiec and some allies as “alt-light,” not real conservatives.

Regardless of how that competition plays out, though, Posobiec’s career in sensitive intelligence looks like it’s run its course. “I will always be proud to wear the uniform,” he says. But he’s got another high calling now: waging a battle of memes, fuzzy truths, falsehoods, and zany theories to keep Trump in power and his growing base of critics at bay. “Just because you served,” Posobiec says, “doesn’t mean that you have no First Amendment rights.”

This story has been updated to add new information from the Navy and clarify an attribution.