'We are focused on making sure every single one of our airmen and guardians can thrive.' 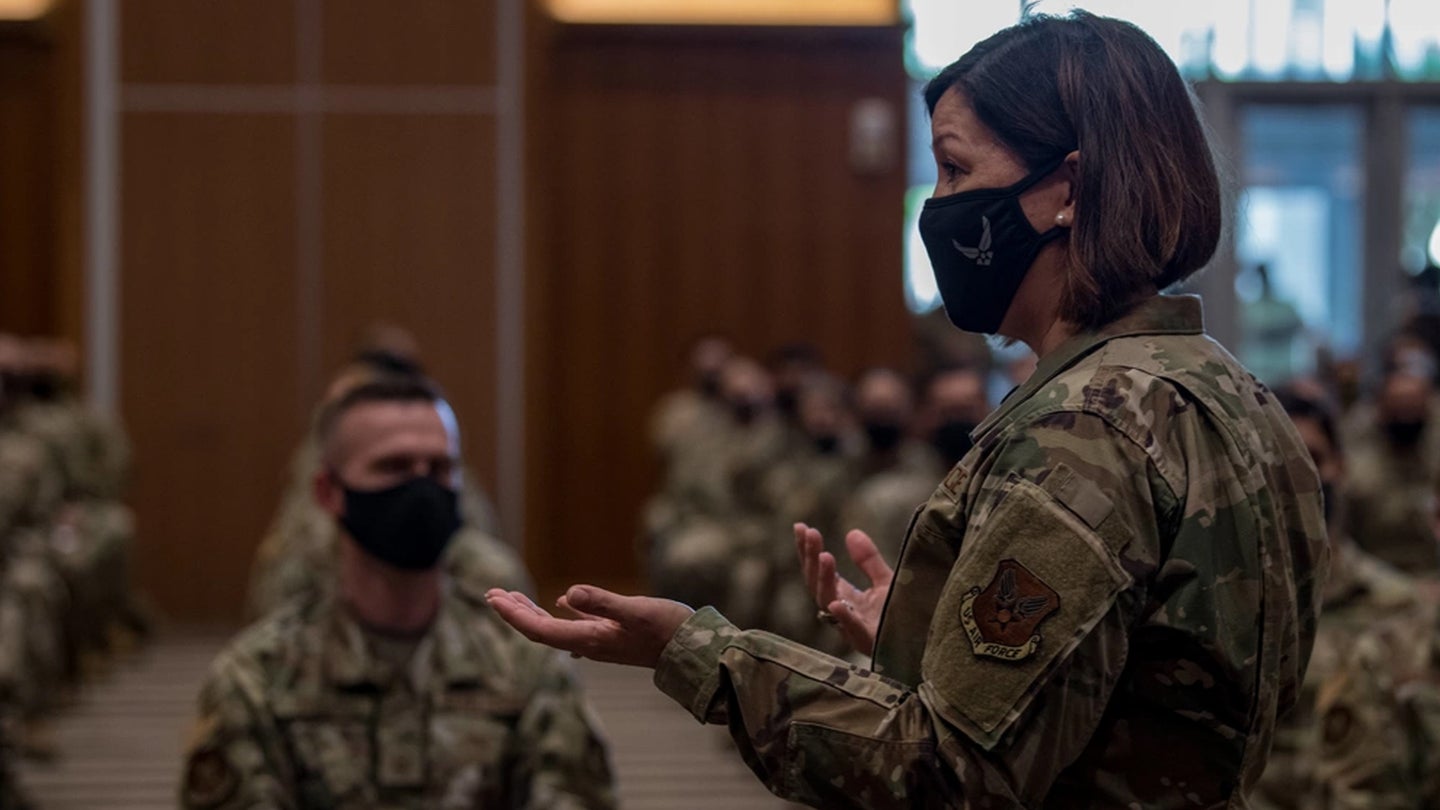 The top enlisted leader of the Air Force recently gave a wake-up call to naysayers who disapprove of the Air Force’s efforts to investigate racial and gender disparities among airmen and Space Force guardians. At a town hall hosted on Facebook on Thursday, Chief Master Sgt. of the Air Force JoAnne Bass was asked by the moderator, Air Force Maj. Christine Guthrie, what airmen and guardians should do if their leaders dismiss those efforts as “just ‘woke’ culture?”

“I might offer that ‘yeah, it’s probably time to wake up and read the over-17,000 pages of comments from over 100,000 airmen and guardians that have said that there are some challenges,’” Bass answered. “So I say yeah, we do need to wake up.”

Specifically, Bass was referring to a 208-page report published last week which covers racial and gender disparities in the U.S. Air Force and Space Force at every point in members’ careers, such as accessions, promotions, disciplinary actions, leadership positions, and retention. The report focuses on how those experiences differ for airmen and guardians who are Asian American, Native American, Pacific Islander, Hispanic/Latino, as well as for female airmen and guardians.

Like Bass mentioned, the report received an overwhelming level of feedback, confirming that disparities are widespread in the service and driving away motivated service members. For example, the report found that:

Air and Space Force leaders emphasized that finding and fixing these disparities is about more than just having an inclusive force: Bringing in more diverse experiences will make the services a more effective fighting force, they argued.

“We are focused on making sure our culture and climate makes sure every single one of our airmen and guardians can thrive, reach their full potential and be their best,” Bass explained. “It’s because of these disparity reviews and reports that we are able to identify some gaps that we have culturally that can help us get better.”

Bass reminded those who don’t think such disparities exist that “we have to value the thoughts and the experiences that every single one of our folks have and just take a step back and be good wingmen to each other and listen and learn from each other.”

“Diversity is a hammer used to silence certain people,” wrote one commenter. “It has nothing to do with readiness or military necessity.”

“We’re screwed as a capable fighting force,” wrote another. “By embracing this PC mess the military will be weaker.”

They aren’t the first ones to accuse the military of wasting time being ‘woke.’ Back in May, Sen. Ted Cruz (R-Texas) called the military “woke and emasculated” for airing an advertisement about how Army Cpl. Emma Malonelord’s two mothers inspired her to join the military. In June, Fox News’ Tucker Carlson and several Republican lawmakers also attacked Army Gen. Mark Milley, chairman of the Joint Chiefs of Staff, for the U.S. Military Academy’s decision to teach students about racism, which included a seminar titled “Understanding Whiteness and White Rage.”

“I’ve read Mao Zedong, I’ve read Karl Marx, I’ve read Lenin. That doesn’t make me a communist,” Milley said in response. “So what is wrong with understanding — having some situational understanding about the country that we are here to defend?”

Air Force and Space Force leaders seemed to take a similar tone in Thursday’s Facebook town hall. Air Force Secretary Frank Kendall, who is White, reflected on his own experiences with police. Kendall estimated that he has been stopped by police ten times in his life, “for speeding, usually” but he never felt afraid for his life by any of them.

“It’s sometimes the middle of the night, out in the countryside somewhere, sometimes it’s on an interstate,” Kendall said. “I pull over and I’m thinking ‘maybe I can talk my way out of this, maybe I can give my military ID and he won’t give me a ticket or a warning.’ I’ve never been afraid once when a cop has stopped me at any time at any place. There are a lot of fellow teammates who have not had that experience.”

Understanding those different experiences takes time and conversation, Kendall said, and the disparity reviews are meant to help identify differences within the Air and Space Forces. For example, Asian-American airmen and guardians said it was more difficult to get security clearances because they are seen as an “outsider and counter-intel threat” to the intelligence community, the report said.

“Asian Americans reported an increase of ‘Chinese threat bias,’ which they felt negatively impacted their security clearances, and expressed concern regarding ‘COVID hate’ incidents on and off base,” the report wrote.

Beyond security clearance struggles, Asian American airmen and guardians said their peers expect them to be “computer experts” and there is the belief that “they can’t be bold, assertive leaders.”

Meanwhile, American Indians and Alaskan Natives “cited American Indian members being called ‘Pocahontas,’ staff meetings called ‘Pow Wows,’ and members who have no cultural affiliation with American Indian culture dressing up like an ‘Indian’ during celebrations and imitating war cries,” the report said.

Though this report did not focus on Black airmen and guardians (who were the subject of an earlier report released in December), it included a note that Black airmen and guardians experienced “harsher punishments than their non-minority peers, and differences in their skin and hair causing undue negative attention.” An Air Force study earlier this year found that Air Force regulations against facial hair disproportionately affect Black or African American airmen and can lead to slower rates of promotion and limited job opportunities within the service.

One of the report’s more troublesome findings was respondents’ lack of faith in commanders to properly address problems of harassment or discrimination. Among respondents who had experienced sexual harassment or discrimination and contacted their chain of command, 51% said they were dissatisfied with their chain of command’s response, while only 35% were satisfied.

“Of those not satisfied with their chain of command’s responsiveness, almost half reported they felt their complaints were dismissed or ignored, and nothing was done,” the report said. “[T]he person reporting the behavior was blamed or told they are ‘too sensitive.’ Overall, respondents described a lack of accountability for sex-based discrimination and sexual harassment.”

To drive the point home further: two thirds of the airmen and guardians who experienced sexual harassment or discrimination did not contact their chain of command, saying they “feared reprisal or retribution, or believed nothing would be done,” the report said.

One theme was persistent in responses from female and minority airmen: the perception that a “good old boy” network exists in the Air Force where white male airmen use their influence to help others like them in the service at the expense of female or minority airmen. Large numbers of respondents said they felt they had to conform to the majority culture and work much harder than white or male peers to demonstrate competence in their jobs, the report said.

Like with the first report dealing with disparities with Black airmen and guardians, this one left it to senior leaders to address the disparities observed in their individual commands. In six months, The Air Force Inspector General’s office, which produced all of these reports, will assess those commands to see how the response is going. Until then, Bass and other leaders emphasized that it’s up to the entire Air and Space Forces, not just senior leadership, to make the services a more inclusive space.

“Every single one of us has a responsibility and a role in creating that culture and climate where everybody can thrive and be their very best,” Bass said.