Shaving waivers can hold back an airman's career, and since most airmen with waivers are Black, the regulations are effectively discriminatory. 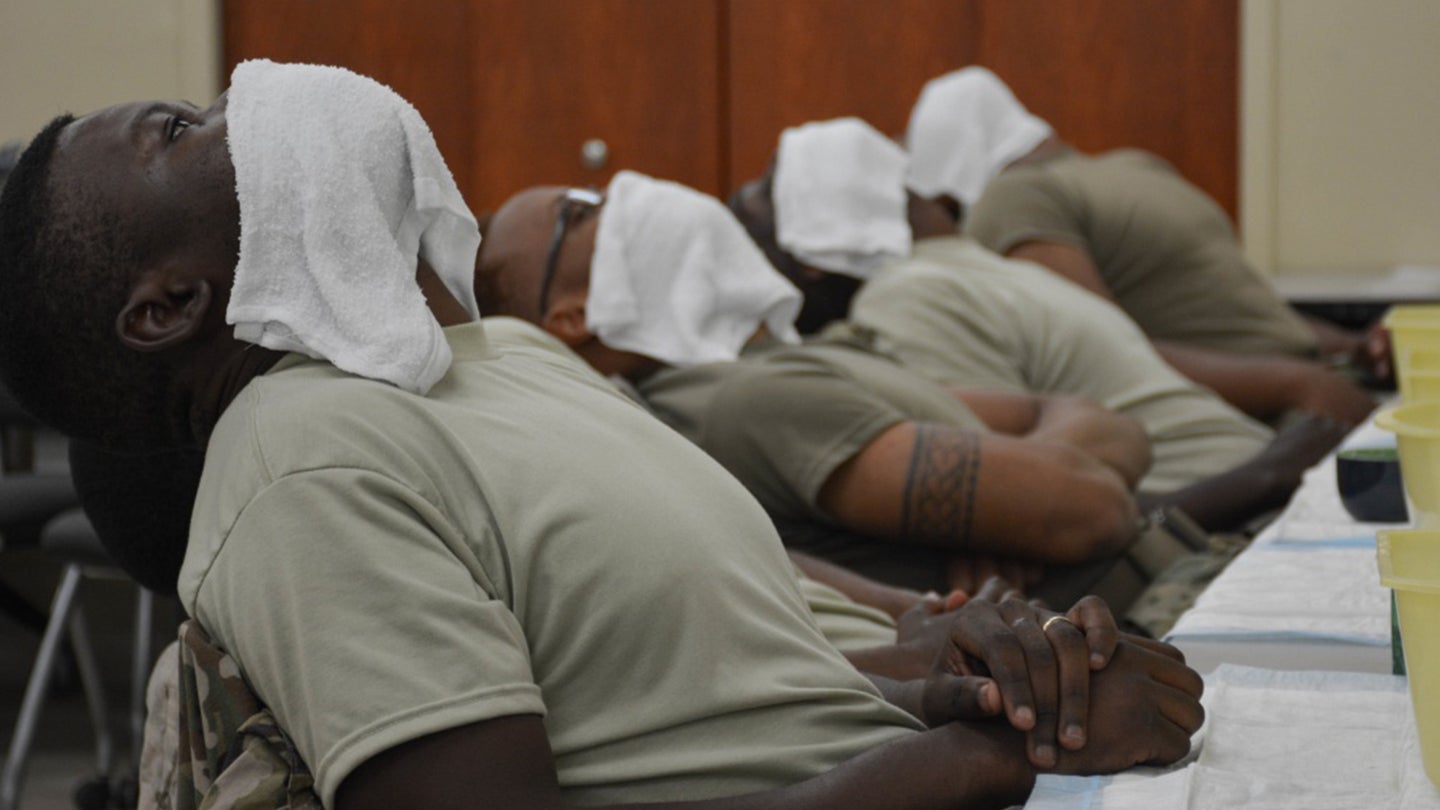 Soldiers assigned to the 3rd Infantry Division Sustainment Brigade use hot towels to warm their faces during a shaving clinic May 22 at the brigade's organizational classroom. The hot towels help stimulate the skin to bring out any oils and sweat that can be used for a lubrication layer between the skin and the razor. (U.S. Army photo by Sgt. Caitlyn Smoyer).
SHARE

Big news today for the many airmen out there who want to grow out their beards: not only is there little evidence showing that beards interfere with a gas mask seal, but the Air Force’s ban on beards may also be contributing to racial discrimination and hurting promotion opportunities within the service.

That’s according to a new research paper published last week in the journal Military Medicine, which found that Air Force regulations against facial hair disproportionately affect Black or African American airmen and can lead to slower rates of promotion and limited job opportunities within the service.

The research studied the effect of shaving waivers on the careers of active duty male airmen. While the Air Force prohibits male members from growing beards, waivers are issued to airmen who, for medical and religious reasons, are not able to shave in line with regulations.

The new study found that airmen with shaving waivers faced significantly longer wait times for promotions and were often barred from sought-after jobs such as Honor Guard, recruiting, military training instructors, or the Thunderbirds demonstration team. While these issues affected airmen of all races who had shaving waivers equally, Black or African-American airmen made up the majority of the waiver holders and thus bore a disproportionate share of the consequences.

“[T]he promotion system is not necessarily inherently racially biased, but instead biased against the presence of facial hair which will likely always affect the promotions of Blacks/African-Americans disproportionately because of the relatively higher need for shaving waivers in this population,” wrote the authors of the study, a team of eight led by Air Force Lt. Col. Simon Ritchie.

The new findings build off a preliminary study published in December which said that shaving waivers had negatively affected the careers of many airmen, especially those of color. That study, which involved 798 airmen responding to emailed surveys, called for more research and data on the subject. This new study looked at a much larger share of data and involved 9,339 valid responses. It also specifically looked at the time it took airmen with shaving waivers to get promoted relative to airmen without waivers, and whether that association led to racial bias.

While the study did not list an exact difference in promotion times between airmen with and without waivers, it did say with mathematical certainty that shaving waivers as a whole “were associated with a significantly longer time to promotion compared to the no-waiver group.”

With regards to promotions, the wait grows longer the more time airmen have shaving waivers. For example, it took airmen with eight or more years with a waiver about a year longer on average to get promoted to the rank of technical sergeant (E-6) compared to airmen who had a waiver for just a year or two. The same was true for airmen trying to hit the rank of staff sergeant (E-5).

The study authors found that the long wait for promotions applied to airmen of all races who had waivers. However, most airmen who have waivers are Black, because they are more likely to be affected by pseudofolliculitis barbae (PFB) than White airmen. Commonly referred to as razor bumps, PFB is a skin condition that makes shaving painful and can lead to permanent scarring if the skin is not allowed to heal, which makes it a common reason for receiving a shaving waiver.

“This condition can appear in a person of any ethnicity but is predominantly seen in Blacks/African Americans,” study authors wrote.

The majority of the waiver group was Black (64.18%), despite that group making up only 12.85% of the cohort. Meanwhile, about 76.83% of the no-waiver group was White. The waiver group also had a greater rate of disciplinary action compared to the no-waiver group (18.96% versus 11.45%). The demographics of the respondents closely match those of the Air Force in general, the study authors wrote. This means that even though the study measured only about 4% of all male airmen, the findings would likely be similar if extended to the entire branch.

The study’s findings are particularly significant because they come at a time when the Air Force is reckoning with racial disparities in the service overall. In December, The Air Force released a sweeping review which found that Black service members are disproportionately punished and promoted more slowly when compared to their White peers. The review directed Air Force commanders to conduct a root cause analysis of racial disparities within their commands, develop an action plan for reporting them, then release a progress report within six months.

Seven months later, this reporter could not immediately find any such progress reports. However, given the most recent research; shaving waivers could play a role in racial disparity in terms of promotions.

“Given the racial distribution of waivers, this may have an unintended discriminatory effect by limiting the opportunities that these members are offered,” the study authors wrote. “We speculate that these members, irrespective of race/ethnicity, may perceive this bias against shaving waivers and choose to leave the service earlier.”

The study could provide ammunition for airmen who really want to grow out their beards, a large number of whom advocate for changing the facial hair regulations on social media platforms like Reddit and Facebook.

Those calls accelerated earlier this year, when the Air Force changed its regulations to allow for women to wear braids, ponytails and bangs in order to prevent irreversible hair loss and migraines stemming from the old hair regulations. But so far, the call for beards seems to fall on deaf ears.

“There’s a lot of comparables where ‘Hey if females and women in the military just got their hair changed, how about beards?’” said Chief Master Sergeant of the Air Force JoAnne Bass in April. “I can’t tell you how many hundreds of times, probably thousands, that we’ve gotten [that] question. The female hair changes were not a ‘want,’ it was very much a need based on health first … when I talk with our men in uniform: Is this a need or is this a want?”

This new study shows that changing beard regulations may actually be a need, rather than a want, because the current policy essentially discriminates against Black airmen.

In an email to Task & Purpose, Bass said the Air Force is continually reevaluating its policies.

“As we work to build a more inclusive force, we are constantly assessing and evaluating all of the processes and programs that affect our Airmen,” she said. “That assessment, and ability to address and adjust, is critical to our force, and our people. I can assure you that we are focused on our Airmen; they are the most competitive advantage we have…and we must get the people piece right.”

The study also called for re-examining the Air Force’s most-cited reason for having a beard regulation, which is the concern that a beard would interfere with a gas mask’s seal around an airman’s face. There currently is no clear evidence showing that is the case, the study said.

“There are conflicting published reports from the civilian sector with regard to the impact of facial hair on P2/N95 [face masks] fit testing, and none that we are aware of evaluating facial hair impact on military gas mask fit.” the authors wrote. “We recommend further study of gas mask and respirator fit testing with facial hair in the military population to clarify this.”

Airmen in need of a waiver could try laser hair removal or chemical treatment, but many airmen are reluctant to undertake them because it could “permanently alter their ability to grow facial hair,” the study authors wrote.

There could be more studies of this topic to come. The authors called for wider research in the area in order to refute or substantiate their findings.

“If substantiated, then the benefits of the grooming standards, as defined in Air Force Instruction 36-2903, should be re-evaluated in the context of these findings,” they wrote.

Editor’s note: This story has been updated with new comments from Chief Master Sergeant of the Air Force JoAnne Bass.