"I am extremely happy and grateful that I got to find out this way," the airman said. 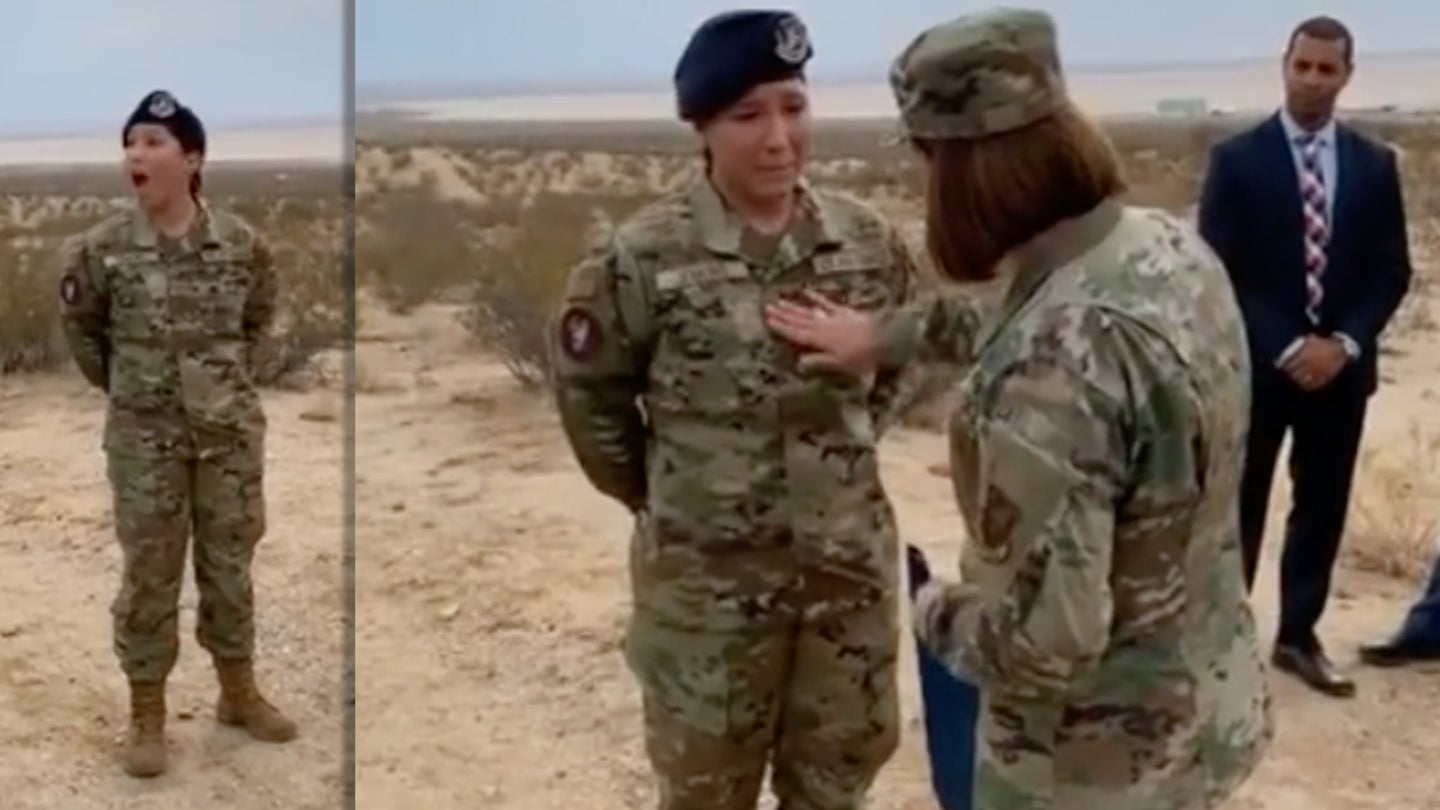 In a viral video of the promotion, Bass made Jenkins panic for a second by asking “Jenkins, did you know you’re out of uniform?” which would be quite embarrassing in front of such a senior airman.

But a moment later, Bass cleared the air by presenting Jenkins with the rank badge of a senior airman. To make it even more special, the promotion was below-the-zone, a program where a skilled airman first class like Jenkins can be promoted to the E-4 rank of senior airman six months earlier than usual.

“I am extremely happy and grateful that I got to find out this way,” Jenkins told Task & Purpose. “It is such an honor to have been coined and presented with BTZ by CMSAF Bass.”

What wasn’t captured on camera last week was all the hard work Jenkins had put into her job before this, and which led up to the BTZ promotion, according to Giancarlo Casem, a spokesman with the Edwards-based 412th Test Wing.

Jenkins, who joined the Air Force in August 2019 as security forces airman (the Air Force equivalent of military police), has helped train 43 other airmen since February 2020, seven of whom she trained to become Installation Entry Control and Law Enforce Patrolman-certified. Of those seven, four scored 96% or higher on their evaluation, making them “Exceptionally Well Qualified,” Casem said.

But Jenkins’ true colors showed during a vehicle rollover accident in May which occured right in front of her gate.

All of the five young children riding in the car and the 35-year-old woman driving it were injured, according to local press reports. One child was in critical condition, and, most tragically, one 7-year-old child died at the scene. The cause was still under investigation at the time, though it was reported that none of the children were wearing seatbelts.

That day, Jenkins sprang into action, directing first responders to the scene and ensuring one of the patients remained conscious until she was loaded into the ambulance. But the memory of responding to the accident stuck with Jenkins, and they came out during the promotion ceremony last week.

“My emotions were already everywhere when CMSAF Bass talked about a major vehicle accident,” that she and a fellow airman had responded to recently, Jenkins said. The airman could see Bass tearing up, which made Jenkins start to cry as well. On top of the trauma of the accident, the airman was also meeting someone she looked up to.

“I wore my new boots, my best top, and even fixed my hair in a fishtail braid and ponytail,” Jenkins said. “I was meeting her for the first time, so I wanted to look my best because I admire her and respect her.”

Bass’ joke about the uniform must have helped lighten the situation, but not without a minor panic attack first.

“My heart dropped,” Jenkins said. “I looked down at my uniform, then at my flight chiefs and that’s when it hit me. Did I make Below the Zone? I answered my own question when I saw her opening the folder with a promotion certificate.”

The airman said she would cherish and remember the moment forever, which is great because she is technically under orders to do so.

“Listen, all that hard work, everything that you go through, is all about today,” Bass said with a hug in the video. “Keep a good tribe around you and make us proud.”