Meet The Admirals Who Could Be Hillary Clinton’s Vice President

Former Secretary of State Hillary Clinton, the presumptive Democratic nominee for president of the United States, needs a vice president,... 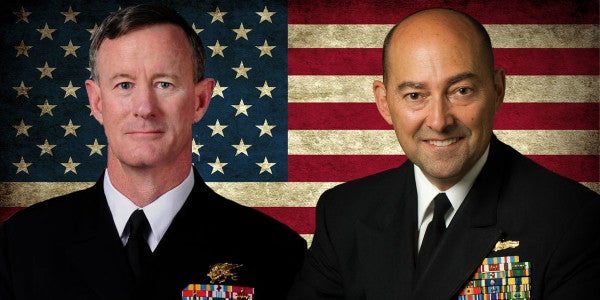 Former Secretary of State Hillary Clinton, the presumptive Democratic nominee for president of the United States, needs a vice president, and speculation is mounting as to who she may pick.

That man is retired Adm. James Stavridis, a former supreme allied commander of NATO, who is currently the dean of Tufts University’s Fletcher School of Law and Diplomacy.

Stavridis is a widely respected and accomplished career military officer and academic. His history at the helm of NATO could prove useful to Clinton’s campaign as she takes on her Republican rival, Donald Trump.

In an interview with the New York Times published July 21, Trump said he may cease to provide automatic protections to NATO countries.

Stavridis, however, seems hesitant about a role on Clinton’s ticket. In a radio interview with Fox News’ Brian Kilmeade, he laughed off the possibility.

“On a good day, I stand about 5-foot-5, and when they called me up and said, ‘Hey, you’re on the shortlist,’ I thought, ‘You must be talking about my height,'” Stavridis said. “The other problem I have is it’s very tough to get ‘Stavridis’ to fit on a bumper sticker.”

Another option for Clinton could be retired Adm. Bill McRaven, the former head of U.S. Special Operations Command and current chancellor of the University of Texas system.

While it doesn’t appear he is actively being vetted by the Clinton campaign, there have been rumors Clinton could consider the former Navy SEAL officer.

Related: Check out this badass thing McRaven said during the bin Laden raid »

In an August 2014 article in the Daily Beast, at the time of his retirement, McRaven staunchly denied he would accept the role.

However, his background in special operations, including commanding the raid that killed Osama bin Laden in 2011, could nonetheless be appealing to Clinton. As would his role as chancellor of a major public university system in Texas.

More recently, in May, conservative national security consultant Max Boot wrote on Twitter that McRaven or someone similar, “would be great VP choice for Hillary,” and would allow her to seize the center of the electorate.

Clinton is widely expected to announce her pick ahead of the Democratic National Convention, likely in a speech scheduled for July 23 in Miami, Florida.