Why Mattis Won’t Be President

Marine Corps Gen. James “Mad Dog” Mattis himself once said, “You can't allow people to avoid the brutal facts. They... 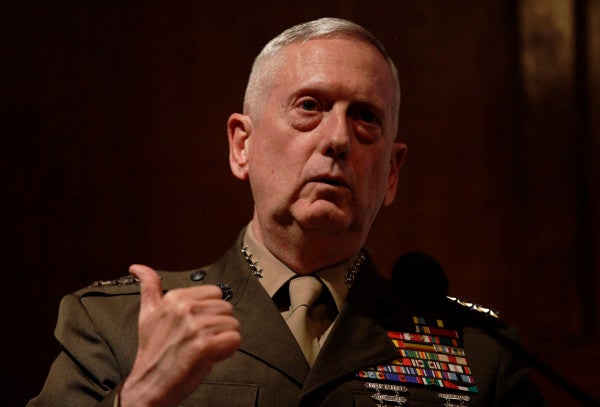 Marine Corps Gen. James “Mad Dog” Mattis himself once said, “You can't allow people to avoid the brutal facts. They start living in a dream world, it’s going to be bad.”

One person living in a dream world is former Jeb Bush and Mitt Romney national security advisor John Noonan, who published an article in The Daily Beast suggesting that “this man [Mattis] can save us from Trump—and Clinton.” While Mattis has served his country with distinction, the idea that he could become president in 2016 is nothing more than wishful thinking.

For one, it is probably too late for Mattis to get on the ballot in many states. In a March 18 interview with Vox, Elaine Kamarck, director of the Center for Effective Public Management at the Brookings Institution and author of the excellent political guidebook “Primary Politics,” said, “There’s almost no way can still get on the ballots. I don’t know what people are smoking. This is truly a pipe dream.”

Getting Mattis on the ballot in all 50 states would require collecting nearly a million signatures from voters across the country, according to an analysis by Ballotpedia. The first deadlines are rapidly approaching, with Texas (80,000 signatures) arriving first on May 9, followed by North Carolina (also 80,000 signatures) a month later on June 9, and then the rest of the country in a flood of deadlines throughout July and August. The sheer scale of this effort makes it nearly impossible for an independent candidate to mount a serious campaign with such a late start. A write-in campaign would be even more difficult to organize, and seven states ban them altogether. A prospective “Mattis for America” campaign would spend so much time, money, and energy simply trying to get on the ballot, they wouldn’t be able to focus on persuading voters to choose him once those ballots get handed out.

Furthermore, the effort to convince the public to vote for Mattis would be far more challenging than Noonan pretends. Noonan attempts to compare Mattis to former President Dwight D. Eisenhower, but this comparison is seriously flawed. Eisenhower was the official nominee of the Republican Party, having won the Republican primary. In a general election with Donald Trump as the Republican nominee, Mattis would not benefit from the Republican party apparatus working on his behalf, Trump would. It is unclear where Noonan expects Mattis, a political novice, to find funding or experienced staff to help him with his campaign. There is a reason why most real and potential independent candidates such as Ross Perot and Michael Bloomberg are extremely rich; they have to be.

Mattis would have to work hard and spend a great deal of money in order to tell voters who he is in time for the election. Outside of the military community, Mattis has next to no name recognition. And the military community is much smaller today than it was in Eisenhower’s time, when more than 9% of Americans fought in World War II. Eisenhower was well-known to the public as the supreme allied commander who led us to victory over the Nazis. Mattis is a brilliant general, but his legacy is less singular than Eisenhower’s. He was merely one general among many who have served in key roles in the War on Terror, and he cannot claim to have seen the war to its conclusion like Eisenhower could.

The Iraq War is also not exactly a glorious, decisive victory like World War II, despite the accomplishments of Mattis and the brave troops who fought under his command. It is unclear how producing a general who commanded our forces in Iraq will resonate with voters when voting for the Iraq War is a liability among liberals and is denounced as a disastrous boondoggle even by conservatives. No one blames the military for the outcome of Iraq, but neither is it a legacy of success on which to base a presidential campaign.

Yet candidate Mattis would have little else to run on. As Michael Bloomberg discovered, there is little ideological room on the left in the race for a candidate more centrist than presumptive Democratic nominee Hillary Clinton. Nor is Clinton’s base particularly eager for an alternative. While she is loathed by conservatives, Clinton is actually quite popular among Democrats and most Democratic voters tell pollsters they would be satisfied with her as her nominee. Candidate Mattis would draw votes almost exclusively from among the ranks of conservatives unhappy with Trump, which would simply increase the chances of a Clinton victory. It is difficult to imagine why Democratic-leaning voters would abandon a certain victory in order to choose Mattis in the hopes of a stalemate that will be decided in the House of Representatives with unknown results. Noonan cites a supposed “enthusiasm gap” in the Democratic primary, based on comparative voter turnout rates, but there is actually no evidence that turnout in the primary correlates with turnout in the general election.

On the Republican side, despite outcry from political establishment, polls show there isn’t a particularly large anti-Trump sentiment among voters either. A recent New York Times poll found that only 17% of Republican voters would “not support Donald Trump if he were the Republican nominee.” The same poll found that support for Trump was actually more enthusiastic than support for his chief rival, Ted Cruz. Nineteen percent of Republicans said they would refuse to support Cruz if he were the nominee, while only 29% said they would “enthusiastically support Ted Cruz,” compared to 35% for Trump.

Furthermore, while there are real concerns about foreign policy challenges like ISIS, this has largely been an election about domestic issues like the economy, income inequality, health care, immigration, and race relations. Many of the presidential debates have given little attention to foreign policy and defense, and voters do not list national security as being among the top issues they care about most. There is, simply put, no large constituency of voters interested in a military general as an alternative candidate, whether that be Mattis, or anyone else.

A Mattis campaign would bear no resemblance to Eisenhower’s landslide victory in 1952. Instead, it would be like more recent campaigns such as Gen. Wesley Clark’s embarrassing showing in 2004, or former Sen. Jim Webb’s 2016 campaign for the Democratic nomination, which failed to gain any traction.

Marines like me will always hold Mattis in high regard, but the Warrior Monk will not be the next president of the United States. Those are the brutal facts. It’s time for John Noonan to stop living in a dream world.