McCain Calls On Trump To Apologize To Vets For Inflammatory Comments

On May 8, Sen. John McCain called on Donald Trump to apologize to those he may have alienated during his... 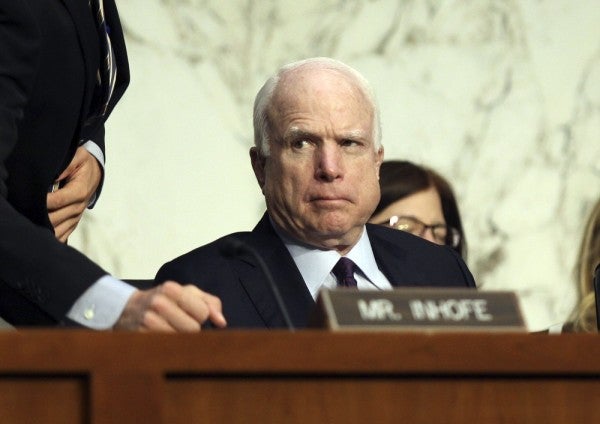 On May 8, Sen. John McCain called on Donald Trump to apologize to those he may have alienated during his primary campaign, namely prisoners of war.

On CNN’s “State of the Union,” McCain expressed concern that Trump offended “a body of American heroes,” when he made derisive comments about the senator’s military service in July. Trump said that he preferred people who weren’t captured.

Although McCain has pledged to support Trump as the Republican nominee, when asked if he would consider appearing on the campaign trail alongside him, McCain said “a lot of things would have to happen” first.

“I think it’s important for Donald Trump to express his appreciation for veterans — not John McCain, but veterans who were incarcerated as prisoners of war,” said McCain. “When he said, ‘I don’t like people who were captured,’ then there’s a body of American heroes that I’d like to see him retract that statement — not about me, but about the others.”

Related:The problem with Donald Trump’s plans for the military »

During the interview, McCain speculated on picks for vice president that may help Trump mend the wounds inflicted during his heated campaign.

McCain said he would encourage Trump to pick a vice presidential candidate who could unite the Republican party, adding that Sen. Joni Ernst, the first female veteran to serve in the Senate, would be “tremendous.”

Watch McCain’s full interview on CNN’s “State of the Union” below.