Slacktivism Won’t Get Gary Johnson Onto The Debate Stage

There has been quite a lot of noise of late from our collective military and veterans communities regarding IAVA’s Commander... 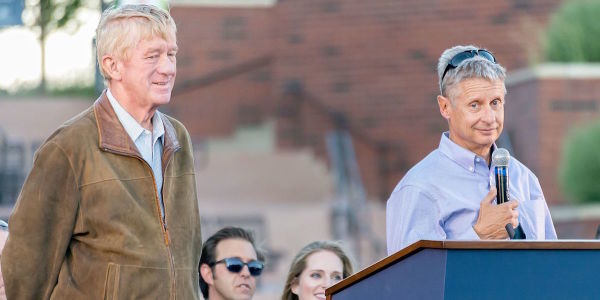 There has been quite a lot of noise of late from our collective military and veterans communities regarding IAVA’s Commander in Chief Forum scheduled for Sept. 7.

While the event will be exclusively focused on military and veterans issues and televised live on both NBC and MSNBC, it will only include Hillary Clinton and Donald Trump, excluding third-party candidates, specifically Libertarian candidate Gary Johnson.

Many are upset that Johnson has been excluded from the town hall event, given his popularity among the military and veterans community. “This is not about MSNBC,” Dylan Milroy, a Marine Corps vet who is fighting have Johnson appear at the NBC-IAVA event, told Military Times. “This is about the IAVA claiming to represent … veterans while actively ignoring them by the masses.”

The problem with this argument is that while Johnson may be popular among the military population, he is only polling at about 8% nationwide, according to Real Clear Politics. And even though a televised town hall dedicated to military and veterans issues is a huge accomplishment for our community, it doesn’t mean that it should be tailored exclusively to what our community wants. Trump and Clinton combined are polling at more than 80% across the country; and therefore, it makes sense why NBC is not including third-party candidates.

Now, I’m an equality guy. I think that inclusion and diversity are incredibly important to our country’s continued success on the world stage, but the reality is that elections are about choices. We had a primary and the majority of the country, in each of the parties, has spoken. Democrats want Hillary Clinton and Republicans want Donald Trump. Something I often hear from our communities is a shared disdain that “everyone gets a trophy.” I am not a fan of that either. Everyone doesn't take turns. So why do we throw a fit and demand that someone who right now has virtually no chance of winning the presidency take away the limited time provided to the two candidates who do a chance?

Rather than complaining about IAVA and NBC excluding Johnson, why not do what we did in the military and take action toward a solution? If you want to actually support Johnson, or any of the candidates, get involved in the election. Each candidate has affinity groups that you can sign up with, even some that are specific to military and veterans.

As veterans, people want to hear what we think about the world. You can call voters through phone banks, knock on doors in battleground states, raise money, hand out fliers, or share your opinion in the media. You have the power to change the conversation.

So if you want to see Johnson on stage with Clinton and Trump, then you should take action. Support his campaign to get him over the 15% threshold required for him to participate in the debates. You can also do the same for Clinton, Trump, or Jill Stein. The first debate is Sept. 26 and polls are happening every day.

In the military, we sacrificed our lives and careers toward the interests of the nation. As veterans, we have an obligation to continue that service and there is no better way to do that than through engaging in electing our political leaders. Stop complaining about the status quo and start taking action to make a difference.