Hillary Clinton appealed for veterans’ support during a speech at the VFW Convention in Charlotte Monday, where she also repeatedly... 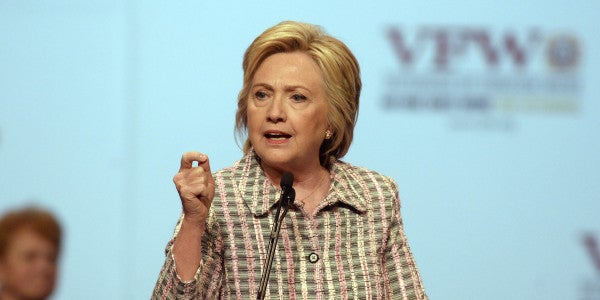 Hillary Clinton appealed for veterans’ support during a speech at the VFW Convention in Charlotte Monday, where she also repeatedly criticized rival Donald Trump’s statements and positions without mentioning his name.

It was Clinton’s second appearance in Charlotte this month, and came three days before she’s set to accept the Democratic nomination for president. Trump, speaking in Winston-Salem Monday night with Gov. Pat McCrory, is scheduled to address the VFW on Tuesday.

Their repeated visits to North Carolina highlight the state’s importance as one of the few battlegrounds that could go blue or red in November. The candidates are virtually tied in North Carolina, with Clinton enjoys a 2-point advantage in the state – well within the margin of error – according to Real Clear Politics’ polling average.

Speaking before a near-capacity crowd in a room set up to hold 6,000, the former secretary of state recalled her father’s service in the navy during World War II and her work with veterans while serving as a Senator from New York.

Members of he VFW salute during the presentation of colors at the start of Monday's program during the 117th annual VFW National Convention at the Charlotte Convention center on Monday, July 25, 2016 in Charlotte, N.C.Photo by David T. Foster III/Charlotte Observer/TNS

She said the nation’s memorials were built in large part because of the efforts of veterans.

“Those memorials might not exist if not for you,” Clinton said. “So thank you, and thank you for standing up today and everyday for veteran’s health, for veteran’s education.”

Before Clinton’s speech, a VFW official reminded the audience to be respectful of all the speakers coming to seek their support this week. The crowd clapped politely for Clinton, and there were no major disruptions. Near the start of Clinton’s speech, someone in the audience shouted, “How about Benghazi?” Another man said, “Can’t stand her,” and walked out as Clinton began talking.

Though Clinton didn’t mention Trump by name, she also sought to set herself apart as the more optimistic candidate, in contrast to Trump’s message that the U.S. is in dire straits and the military is badly weakened.

Clinton said she doesn’t “understand people who talk trash America,” and that she won’t be the candidate of “fear and smear” tactics.

Clinton also said she believes the United States is “an exceptional nation with capabilities that no other country comes close to matching. We have the world’s greatest military – don’t let anyone tell you otherwise.”

And she highlighted some of Trump’s more controversial statements.

“You will never hear (from me) praise for dictators and strongmen who have no love for America,” she said.

Clinton also said she will never “order troops to commit war crimes,” a reference to Trump saying he would resume waterboarding of terrorism suspects.

She added: “I believe in standing with our allies. Generations of American troops fought and died to secure those bonds. They knew we were safer with more friends and partners.”

After the event, the presumptive Democratic presidential nominee plans to meet with campaign volunteers at the Neighborhood Theatre in NoDa. Her visit comes three days after she announced Virginia Sen. Tim Kaine as her running mate.

Republican presidential candidate Donald Trump, who has a campaign rally scheduled in Winston-Salem at 8 p.m. Monday, will address the VFW convention Tuesday.

“It's just disappointing,” he said.

Other veterans at the Charlotte convention were apprehensive of Clinton.

Allen Roberts, of Fairfax, S.C., summed up the race in a word: “Confusing.”

The 62-year-old Army veteran said he finds Trump to be divisive, and worries about his comments that he might not automatically defend all NATO allies in the event of an attack.

“You want your allies to still respect you,” said Roberts. “Apparently, during school he skipped history.”

But he added, “I could say bad things about Hillary too.”

“One of them is going to win, no matter what,” he said. “In the end, you just hope they do the best they can for the country.”

“I have stayed out of the political arena my entire adult life, but given the complexities of issues facing our country today and its longtime allies, I felt compelled to speak up and be heard,” he said in a statement released by the Clinton campaign. “I have no doubt that she is the leader we need at this time to keep our country safe.”

Hillary Clinton, the presumptive Democratic presidential nominee, waves to the crowd as she steps onstage to address the 117th annual VFW National Convention at the Charlotte Convention center on Monday, July 25, 2016 in Charlotte, N.C.Photo by David T. Foster III/Charlotte Observer/TNS

The Clinton campaign already has run 10 different TV ads in the state. With allies such as Priorities USA Action, it’s spent or reserved more than $20 million in TV time. The Trump campaign has yet to air an ad.

At Clinton’s event with Obama in Charlotte this month, she called for policies popular among the Democratic base: paid family leave, a higher minimum wage, gun control and continuation of the Affordable Care Act.

The rally drew more than 7,000 people to the Charlotte Convention Center – 5,500 in Hall C, where they spoke, and another 2,400 in an overflow ballroom.

Monday’s lineup for the VFW convention includes the presentation of the VFW Armed Forces Award to the U.S. Army Special Forces and the VFW Hall of Fame Award to Rob Riggle.

Approximately 10,000 VFW and VFW Auxiliary members and guests were expected to attend.