How Donald Trump Won The White House And Stunned The World

America, he’s hired. Donald Trump, the bombastic reality-TV-star-turned-politician, won by harnessing deep discontent with Washington and deep-seated loathing of his... 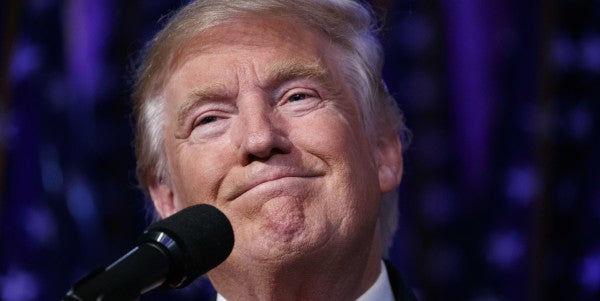 In so doing, he upended every scrap of conventional wisdom. With zero political experience, Trump dismissed the trappings of a routine candidacy. He insulted people. He warred openly with his own Republican Party. And he eschewed politically safe talk for calls to “build the wall” and “drain the swamp,” tapping into a deep vein of American populism.

Trump’s win also could raise the value of celebrity over government experience and give rise to other boldface names who believe they have a shot at holding elected office. Already there has been speculation about Mark Cuban, the Clinton supporter and billionaire owner of the Dallas Mavericks.

“Our culture allows a celebrity style to flourish quickly,” said Scott Jennings, who ran Republican presidential nominee Mitt Romney’s 2012 Ohio campaign. “They’ve got the instant name recognition. They can move faster because of it, and that’s what Trump did.”

The results could also force another search for so-called “undercover” or “shy” voters, who wouldn’t tell pollsters that they backed Trump. His campaign argued for months that his campaign was churning out new voters and pollsters were missing some of his supporters, though data analysts said they found no proof.

But Trump may have been “right all along there is a group that he managed to harness and surprise the world,” Jennings said.

Trump’s star status gave him entry to voters through free television appearances. Early in his effort as he dispatched 16 less-colorful primary rivals, Trump reaped the benefits of free media. Cable and TV networks carried many of the former reality TV star’s campaign events live and he dominated the Sunday morning political talk shows, conducting interviews by phone, a courtesy not extended to his rivals.

Trump did his best to boost participation among non-college-educated white voters, bolstering critics of the Republican National Committee’s “autopsy” report from the 2012 election, which had advised the party to reach out to minority voters.

Yet many argued that Trump didn’t so much win as Clinton lost. Her popularity rating was nearly as low as his, and voters told pollsters she was untrustworthy.

“She was potentially the worst possible nominee in history,” Jennings said.

Trump won by rolling big numbers with his most ardent supporters, numbers Clinton didn’t match with her own backers.

He won men by 12 percentage points, according to network exit polls. Clinton won women by 12 — but that was below the big margin she was expected to get.

Trump won white voters, who made up 70 percent of the electorate, by 21.

Trump also won with voters who waited until the final weeks to decide. Four of five of them said the debates were a factor in their votes, and they broke 50-47 for Trump. He won voters deciding in September and October by 14. Among those deciding in the last few days, he won by 2.

Clinton’s campaign may also have blundered by spending time and resources to attract Republican voters, when many “came home” to Trump in the closing week: He entered the final weekend with the support of 92 percent of Republicans, according to a McClatchy-Marist Poll. That’s more than Clinton, who had 89 percent support from Democrats.

Trump also benefited from circumstance. His numbers plunged with the October release of a 2005 tape of him boasting about sexually molesting women. Scores of Republican officeholders looked to distance themselves from a candidate they believed was now toxic.

That was until the FBI announced 11 days before the election that it was renewing an inquiry into Clinton’s State Department emails.

“That’s where the race shifted to a referendum on Hillary Clinton and people’s worries about her honesty and trustworthiness,” said Republican strategist Kevin Madden, who served as a senior adviser to Romney. The FBI disclosure enabled Trump to revisit Clinton fatigue when it came to scandal and investigation.

He stuck to that script in the closing week, bashing Clinton as “crooked” and seizing on news about rising Obamacare premiums to warn that Clinton would mean four more years of an Obama presidency. Trump repeated a Fox News report that an indictment was likely in an FBI inquiry into the Clinton Foundation, and chants of “lock her up” echoed off the walls at his rallies. Fox later conceded the report was mistaken.

“When he made his campaign a vehicle for that and not about him, he was in a competitive position,” Madden said.

Throughout his campaign, Trump had his advisers cringing as he veered off script, but he largely succeeded on staying focused in the final weeks, as more voters streamed to early voting sites. He gave the Clinton campaign little new material, instead focusing on his Democratic opponent’s 30 years in the public eye and casting himself as a change agent.

At a Florida rally, he even reminded himself to stay on message: “Stay on point, Donald,” he said as much to himself as to the crowd. “Stay on point. No sidetracks, Donald.”

Democrats pointed to FBI Director James Comey’s decision to notify Congress about another Clinton email investigation as the death blow to her campaign.

“The FBI director bought himself a presidential election,” said Harold Cook, a veteran Texas Democratic operative. “And the Trump campaign was relentless enough in convincing just enough voters in just enough places that she’s a crook.”

And if Trump often proved erratic and veered widely off script, his message never did, said Jonathan Felts, who was a White House political director for President George W. Bush. It helped Trump stand out in a crowded primary and proved effective against a Washington insider such as Clinton.

“He benefited from a very easy to understand and appreciate message: ‘Make America great again,’ ” Felts said of Trump’s iconic slogan. “That’s not about Donald Trump; that’s about the American worker who used to be punching in at the textile plant. That’s about college kids wanting jobs when they get out of school. It’s what everyone wants: for America to be great again.”

And Trump’s blunt lack of niceties worked with a middle class frustrated by a sputtering economy and an inept Washington.

“He didn’t try to finesse anything, and that what’s people heard,” said Dave Carney, who was President George H.W. Bush’s White House political director. “There’s a lot of enthusiasm in telling the establishment to screw off.”

Trump’s habit of going off on tangents and reacting to every Clinton provocation did limit his appeal, Carney said.

“He ended up going down these rabbit holes, which were hurtful,” Carney said. “If he had purely stuck to the message that got him there, it would have been a landslide.”

Kim Bream, 53, a Gettysburg, Pa., proofreader who stood in a chill wind last month outside a Trump event, hoping to catch a glimpse of the candidate, said he had renewed her faith in government.

She said it angered her when Trump said that if he didn’t win the White House his efforts would have been in vain, because she believes he upended the political establishment, regardless.

“Mr. Trump has really changed the way politicians see us,” Bream said. “He’s shown politicians that they need to pay attention to the voters. We’ve been complaining about how they get to Washington and forget everyone at home. Now they’re paying attention.”

Bream said she was delighted by the angst that Trump had brought to establishment Republicans.

“He’s really surprised everyone,” she said. “They thought the status quo was enough and they could pat us on the head. Now they’re learning we’re here and we want results.”