While President Donald Trump’s job approval rating among the overall American public has dipped to a historic low since he... 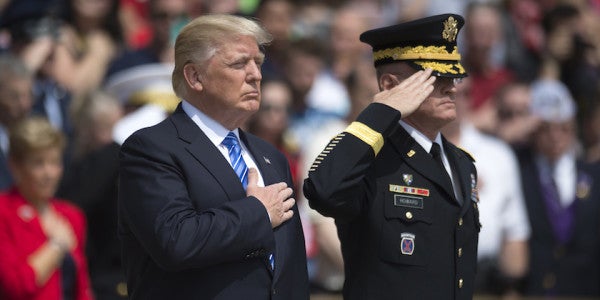 While President Donald Trump’s job approval rating among the overall American public has dipped to a historic low since he took office in January, he continues to enjoy solid support from veterans of all generations, according to a new survey conducted by the Pew Research Center’s American Trends Panel.

The survey, published May 26, found that 54% of people who had served in the U.S. military at any time approved of Trump’s job performance in April. That’s 15 percentage points higher than the overall public’s Trump approval rating of 39% for that month.

A series of surveys conducted by Gallup that measure Trump’s job approval rating found that he averaged 41% during his first quarter as president. The previous record low for a post-World War II president was held by Bill Clinton, who averaged 55% at the same point in his presidency. The record high, 74%, was set by John F. Kennedy. The average for all post-World War II presidents is 61%.

A separate NBC News analysis of Gallup data on June 4 suggested that Trump’s support in “military post counties” — the communities that neighbor U.S. military bases — had dropped precipitously in May. According to that analysis, military communities that backed Trump by a 51% approval to 41% disapproval margin in the president’s first hundred days had flip-flopped completely, with only 43% now approving and 53% now disapproving of the president. Such results have yet to emerge in other polling data like Pew’s, however.

Pew partly attributes Trump’s high job approval ratings among veterans to demographics, which deviate from the general U.S. population in a few key areas. “Veterans are more likely to be male, white and older,” Pew reports. “[Those are] all demographics in which support for Trump tends to be higher.”

Ninety-two percent of veterans are male and 8% are female, according to Census Bureau data from 2015. That’s a dramatic contrast to the gender breakdown among all U.S. adults, which sits at 48% male and 52% female. Veterans also tend to be older — nearly half (49%) are 65 years or older, while that age group represents only 19% of the general U.S. population. And 78% of veterans are white, compared with 65% for all U.S. adults.

“This statistical analysis confirms that even accounting for demographic factors such as age, gender and education,” Pew writes, “being a veteran is associated with higher levels of partisan identification with the GOP.”