The good news is Kathy Griffin achieved the impossible Tuesday: She got Donald Trump Jr., Chelsea Clinton, most of the... 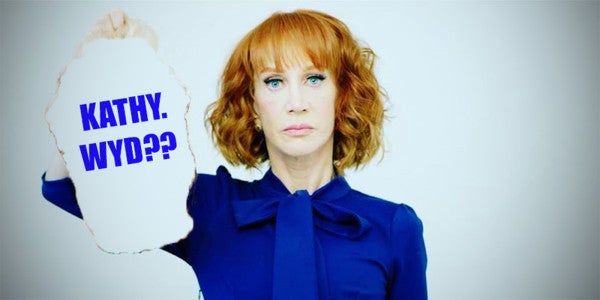 The good news is Kathy Griffin achieved the impossible Tuesday: She got Donald Trump Jr., Chelsea Clinton, most of the liberals in Hollywood, and a disgraced Republican ex-congressman who was busted for cocaine possession to all publicly agree with each other.

The bad news is they had to agree to something pretty obvious to everyone but Griffin: Jokes about cutting off the head of the president of the United States are not funny.

Griffin went on the defensive May 30 after she and star photographer Tyler Shields published a photo of the D-list celebrity holding a bloody, disembodied, orange-coiffed likeness of President Donald Trump’s noggin. “I won’t give away what we’re doing,” Griffin said in a video of the photo shoot, obtained by TMZ, “but Tyler and I are not afraid to do images that make noise.”

Well, that’s some… noise, I guess:

It’s hard to see how Griffin was mocking Trump. You could mock his sensitivity toward women, his inability to grasp the details of policy, his carelessness with classified information, his reluctance to disavow racist and violent supporters, his childlike whims, and his appetites. But to my knowledge, he has not beheaded anyone or been beheaded himself, which makes it kind of hard to mock him with a faux decapitation.

Also, he’s the president. Taking him down a notch and parading a lifeless likeness of his gore-matted cranium are not exactly the same thing. How do we know? Ask the Secret Service:

On it! @SecretService has a robust protective intelligence division that monitors open source reporting & social media to evaluate threats

Threats made against @SecretService protectees receive the highest priority of all of our investigations. #ProtectionNeverRests

Griffin apologized. No one cares much. Even veterans groups that have taken issue with Trump’s policies in the past are righteously angry over Griffin’s tasteless head job.

“The Veterans of Foreign Wars of the U.S. strongly condemns comedian Kathy Griffin's incredibly revolting attack on the President of the United States,” VFW National Commander Brian Duffy said in a statement this morning. “Her apology is not accepted. What she did was not humorous nor should it be protected speech or expression. Playing to an audience with a severed head is what our enemies do. The USO should immediately end its relationship with her.”

Griffin, who’s traveled overseas with the USO on several occasions and hosted “VH1 Divas Salute the Troops” a few years back, is also an enthusiastic supporter of Iraq and Afghanistan Veterans of America — in fact, only a few days before tweeting the Trump-head photo, she tweeted a message of support for IAVA’s “Go Silent” Memorial Day campaign.

Join me this #memorialday to honor those who gave the ultimate sacrifice for our freedom with a moment of silence @iava #GoSilent pic.twitter.com/No9oBw5tsm

Beyond military circles, the obvious people who would be obviously shocked by Griffin’s obvious attempt at shock humor are, obviously, shocked:

Kathy Griffin should be ashamed of herself. My children, especially my 11 year old son, Barron, are having a hard time with this. Sick!

Disgusting but not surprising. This is the left today. They consider this acceptable. Imagine a conservative did this to Obama as POTUS? https://t.co/QdghcbIjS7

Our politics have become too base, too low, & too vulgar, but Kathy Griffin's post descends into an even more repugnant & vile territory.

But to be fair, even Hollywood liberals and friends of Griffin are shocked:

This is vile and wrong. It is never funny to joke about killing a president. https://t.co/zIiuKoMyFw

.@kathygriffin I'm sorry but that is totally inappropriate and so very offensive. And I have to believe you're smart enough to know better.

For the record, I am appalled by the photo shoot Kathy Griffin took part in. It is clearly disgusting and completely inappropriate.

Journalists & soldiers, this is also disgusting display 4 moms, dads, families who have lost loved ones to #ISIS in the most horrific way pic.twitter.com/gz1xlInR2G

W Griffin breaking, will b interesting to see if @CNN cuts ties or troops she helps at nonprofit @iava (where they do good work btw) pic.twitter.com/zguf0ZtVSG

Even Trey gets it.

On some level, after the lost weekend America is stumbling through right now, it’s hard to believe there are some social and political norms that haven’t been abrogated yet. But whatever disagreements we all have, wherever this big 241-year-old experiment in self-governance may be headed, we tend to agree that you don’t kill presidents or joke about killing presidents. There are so many jokes to make about presidents that are funny and don’t involve killing them. Any presidents. All presidents!

Celebrities and politicians being generally horrible has long been the default position of the United States. But at least, for a day, they can be horrible together. Thanks for that, Kathy.