How Did President Trump Do At His First Service Academy Commencement? 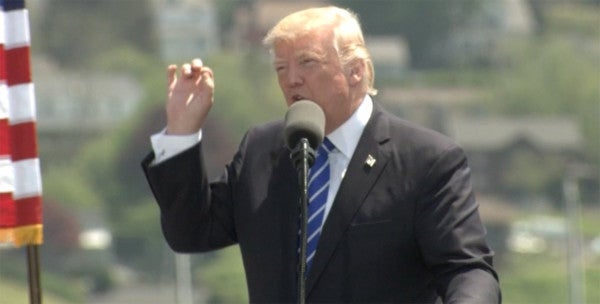 Ah, service academy graduation! That wonderful springtime rite in which plebes become plebes no more, firsties drunkenly don cadet dress uniforms for the last time, and some old dignitary gives them a brief, rousing pep talk about the sacred duties they're about to undertake. Some grads get a secretary of defense or a vice president; some get the big cheese himself, the president of the United States, to tell them what a great thing they've done with their four years, and how much the uniformed forces will appreciate their commissioned service.

President Donald Trump gave his very first commencement address May 17, to the cadets of the U.S. Coast Guard Academy. How'd he do? What was his message of honor and duty for these self-sacrificing ensigns-to-be? Let's check in with the veterans and reporters of Twitter:

"Something's happening all the time with the United States Coast Guard."

Speaking to US Coast Guard grads, Pres. Trump talks about how he won't talk about how much he's saved them on F-35 fighter jet costs.

Trump telling CG cadets that he won't even say how much he's saving them on F-35, Ford carriers. Note that Coast Guard operates neither

Petty sure he doesn't know who he's talking to…he's conflating USCG with USN in some places, military at large in others…

After several minutes of talking about Coast Guard, Trump turns to himself: "Look at the way I've been treated lately."

This is what President Trump told U.S. Coast Guard Academy graduates in a commencement address pic.twitter.com/HDHnmi0Ufs

Trump — speaking to Coast Guard cadets proud of their own accomplishments — is now running through his own.

Trump: "Things happen to you that you do not deserve and are not always warranted. But you have to put your head down and fight fight fight"

even a service academy commencement speech becomes a vehicle for his grudges, victimhood and vanity. He is our disgrace.

Trump at USCG commencement making it about him: "The people understand what I'm doing.."

Curious how Coast Guard grads, many of whom will actually be called on to risk their lives, took this message. https://t.co/NYmcT4FTGu