No, A Secret Service Agent Did Not Have ‘Tactical Fake Arms’ During The Inauguration

Trump’s inauguration ceremony in Washington D.C. has left us, the American public, with much to process. But not everyone is... 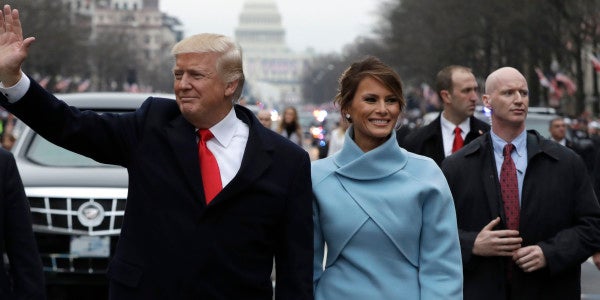 Trump’s inauguration ceremony in Washington D.C. has left us, the American public, with much to process. But not everyone is obsessing over crowd sizes, or riots, or whether “alternative facts” are facts from a parallel universe or just lies (you be the judge!). For some, maybe the most intriguing moment of the whole spectacle was the unusual behavior of one man: Not the new president, but rather a secret service agent, or bodyguard, who accompanied Trump and Melania along the inaugural parade route. Now, a network of internet sleuths are trying to figure out what it means.

The agent in question first appeared in footage of Trump and his entourage walking in the parade. He’s a large man with a bald head and a “don’t fuck with me” look on his face — you know, the classic bodyguard type. In the video, the bodyguard’s hands are held conspicuously in front of him, one touching the pinky finger of the other, as if he’s adjusting a ring. Seems normal enough, right? Well, that depends on how you think arms should behave. Because instead of moving around — the way human arms tend to do — the agent’s arms seem to stay permanently fixed in the same awkward position for the entire procession. That’s a long time for a person to hold their arms in such a way. Something’s going on here.

It didn’t take long for conspiracy theories about the bodyguard with the mysteriously stiff arms to begin circulating on the internet. The most popular, and reasonable, theory is that the arms aren’t real. They’re decoys. According to that theory, the fake arms would have allowed the bodyguard to carry a rifle beneath his coat, which many sleuths pointed out was unusually large and boxy. Then, if someone attacked, surprise!: the bodyguard’s real arms would emerge from the coat with the rifle and, using his real trigger finger, he’d swiss-cheese the assailant.

“After yesterday’s presidential inauguration, many members of the military and law enforcement community noticed something very unusual about one of Trump’s bodyguards,” begins a post that appeared on the gaming blog FragHero. The author adds, “The conclusion they reached was that he did indeed have tactical fake arms.”

Look, I’m not one to question the tactical expertise of a bunch of guys who are really good at Call of Duty. My combat experience is limited to just the boring old counterinsurgency stuff we did in Iraq and Afghanistan. And, yes, of course, I want to live in a world where a presidential bodyguard uses tactical fake arms to conceal a rifle in his coat. We all do. But we don’t. Or if we do, there’s no proof of it yet. Because, you see, those arms — those unusually stiff arms — are, in fact, real. Made of real flesh and bone. The evidence abounds, but allow me to direct you to the gif below, which is one of several images that show the bodyguard’s arms and hands in motion. The bodyguard, In the background of the image, exits one of the vehicles in the motorcade, and adjusts his tie and coat the way a man — a human man with functional arms — does whenever he’s about to appear in public.

A little while later, you see his hands move again (we’ve blown it up so you can see it clearly). And so there you have it. Those fake arms are real.

Watch the full video of the agent from CSPAN below.