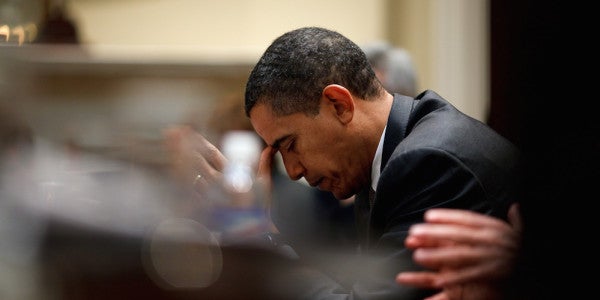 It’s described asa defining moment of former President Barack Obama’s foreign policy: His resistance to using military force in response to a chemical weapons attack in August 2013 by the Syrian government against civilians in Ghouta, a suburb of the Syrian capital Damascus.

Obama had said that Syria crossed a “red line” via an attack with the chemical weapon sarin gas, which had killed more than 1,400 people.

Ina profile of Obama’s foreign policy doctrine by the Atlantic’s Jeffrey Goldberg, Obama said the main factor in his decision not to strike Syria was that “our assessment that while we could inflict some damage on Assad, we could not, through a missile strike, eliminate the chemical weapons themselves, and what I would then face was the prospect of Assad having survived the strike and claiming he had successfully defied the United States, that the United States had acted unlawfully in the absence of a UN mandate, and that that would have potentially strengthened his hand rather than weakened it.”

The then-president told Goldberg, “I’m very proud of this moment” — the moment Obama decided to resist the pressures of the status quo and the international community to use deadly military force to react to the human rights atrocity in Syria. Senior Obama officials told the world, not striking enabled the United States to forge a deal that accomplished something missiles never could: actually eliminating Syria’s chemical weapons stockpile.

With the threat of a military attack by the United States,a deal was struck between the United States, Russia, and Syria. Under the terms of the deal, Syria offered up a list of its chemical weapons stockpiles, and the Organization for the Prohibition of Chemical Weapons would oversee the destruction of the weapons and the facilities to make them.

It was supposed to have worked. By the end of 2014, all of Syria’s chemical weapons were said to have been disposed of, according tothe Los Angeles Times, as well as 24 of 27 chemical weapons production facilities (the other three were supposedly inaccessible due to instability associated with the war).

“The United States of America has never been more engaged in helping to lead in more places than we are now,” then-Secretary of State John Kerry claimed to Meet the Press’ David Gregory on July 20, 2014. “…With respect to Syria, we struck a deal where we got 100% of the chemical weapons out.”

Well, turns out, no we didn’t. Syria very clearly did not hand over its chemical weapons arsenal. An April 4 attack in a northern Syrian town left more than 70 people dead, including women and children, and bore all the signs of a chemical weapons attack.

The images show children and other civilians struggling to breathe. Others showed victims foaming from the mouth. The pupils of many victims were small, the size of pencil points. All of these are symptoms of being struck with a banned nerve agent like sarin, expertstold the New York Times.

“The symptoms were pale skin, sweating, narrow or pin-eye pupils, very intense respiratory detachments. Those symptoms match the usage of Sarin,” a doctor in the regiontold CNN.

The Times also cited witnesses who described the attack being delivered via airstrike from the Syrian government.

What’s more, there’s some indication the Obama administration knew that it hadn’t gotten all of Syria’s chemical weapons. On Jan. 12, 2017, just eight days before the inauguration of President Donald Trump, the Treasury Department announcedvia press release a new round of economic sanctions against Syria as a result of its chemical weapons program, citing two chlorine gas attacks by the Bashar al Assad regime in Syria in 2016.

Now, fewer than 100 days into his presidency, Trump has taken the opposite action from what is said to have defined Obama’s foreign policy doctrine.On April 6, Trump instructed the military to conduct targeted strikes with 59 Tomahawk cruise missiles against the military air base that Assad’s regime used to launch the April 4 chemical weapons attack.

“There can be no dispute that Syria used banned chemical weapons, violated its obligations under the Chemical Weapons Convention and ignored the urging of the UN Security Council,” Trump said in announcing the strike. “Years of previous attempts at changing Assad's behavior have all failed and failed very dramatically.”

The Obama administration’s much trumpeted restraint and dealmaking failed in its ultimate goal. Assad and Russia played the United States. There was ultimately zero consequence for that terrible sarin gas attack that killed more than 1,000 innocent people in 2013. And there’s now no denying that the Obama administration failed in its stated goal of seizing Syria’s chemical weapons stockpiles and preventing another atrocity. But maybe there’s another argument here: That the Obama administration dramatically reduced the number of chemical weapons in the Syrian arsenal, saving countless lives between 2013 and now. Perhaps it is Obama’s patience that gave Trump the latitude to use a relatively light amount of force, and flex his muscles as a new commander-in-chief.

What remains to be seen is whether Trump’s strike against Assad will pull the United States into a horribly bloody and messy conflict in Syria that has stretched for six years and is precisely what the Obama administration sought to avoid, or whether it will stand as a one-time rebuke of a human rights violation, that will ultimately save lives and prevent further atrocities.