The Trump administration will reinstate a controversial Department of Defense program that distributes surplus military weapons and equipment to local... 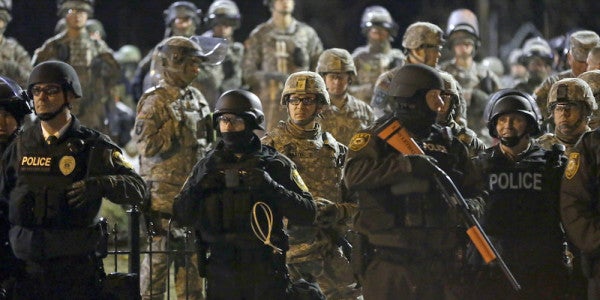 The Trump administration will reinstate a controversial Department of Defense program that distributes surplus military weapons and equipment to local police departments across the U.S., reversing restrictions placed on such transfers in 2015 by President Barack Obama after a series of police-involved shootings of civilians led to clashes between protesters and heavily-armed police officers across the country.

The reversal was first reported by USA Today on Aug. 27.

Speaking to the National Fraternal Order of Police in Nashville, Tennessee, on Aug. 28, Attorney General Jeff Sessions confirmed that President Donald Trump planned to restore the Pentagon’s 1033 program, which has recycled more than $5.4 billion in used weaponry and equipment to arm local police officers for a “multi-front battle” against crime, drugs, terrorism, and “a culture in which family and discipline seem to be eroding further and a disturbing disrespect for the rule of law.”

Among the military-grade equipment funneled to local police forces, according to a 2014 New York Times investigation: vehicle-mounted .50-cal guns, tens of thousands of M-16 assault rifles and ammunition, grenade launchers, combat knives, bayonets, camouflage, and mine-resistant ambush-protected vehicles (MRAPs). And the flow of war materiel into American streets has only increased in the years following the 9/11 terror attacks, amid anxiety of a new type of American carnage.

“You are the thin blue line that stands between law-abiding people and criminals, between sanctity and lawlessness,” Sessions said to the FOP crowd in Nashville, channeling the “law and order” rhetoric that helped elevate Trump to the White House during the 2016 presidential campaign. “The president is proud to stand with you … we have your back. We ‘Back The Blue.’”

The 1033 program was established in 1997, but the Obama administration enacted restrictions amid a public outcry over images of heavily-armed law enforcement officers facing off against unarmed citizens in the streets of Ferguson, Missouri, amid the protests that erupted after the shooting death of 18-year-old African-American Michael Brown by a white police officer. Polling showed trust in local police at a historic low, in part due to rising criticism of militarization.

“We've seen how militarized gear can sometimes give people a feeling like they're an occupying force, as opposed to a force that's part of the community that's protecting them and serving them,” Obama said while announcing the new restrictions in 2015. And he’s not totally wrong: Years of research suggest that the presence of increasingly large and intimidating weapons may actually cause both police officers, perhaps untrained in their new high-tech goodies, and suspects to act violently — a phenomenon that can yield unnecessary casualties.

Many law enforcement officials, however, are pleased with Trump’s decision to take the gloves off local police officers. “Protective equipment is essential to officer and public safety in a wide variety of life and death situations,” NFOP president Chuck Canterbury told the Washington Post. “The previous administration was more concerned about the image of law enforcement being too ‘militarized’ than they were about our safety.”

But there’s another problem facing the newly-resurgent 1033 program: fraud. A July Government Accountability Office report found that the federal government’s highest auditing power managed to obtain more than $1.2 million in military-grade equipment, from bomb-making materials to M-16A2 rifles, with little more than a fake address and website for an entirely fictional law enforcement agency — in less than a week. “They never did any verification, like visit our ‘location,’ and most of it was by email,” the GAO official who ran the string told Wired. “It was like getting stuff off of Ebay.”

More frustratingly, the news came just after Democratic Virginia Gov. Terry McAuliffe’s bogus claim that the militias that rolled up in Charlottesville during the fateful Aug. 12 clashes between white nationalists and counter-protestors were better equipped than state police. While the country and state law enforcement had plenty of access to semi-automatic rifles and body armor through the 1033 program, his viral quip conjured the intimidating specter of heavily armed citizens — an easy boogeyman for the state to justify an expansion in its monopoly on coercive force. The result is a social-psychological arms race — one more likely to end with more bodies than less.

“We have an epidemic in the United States of police using excessive force, particularly against people of color, with injuries and deaths mounting,” the ACLU said in a statement. “It defies logic to arm the police with weapons of war—grenade launchers, high-caliber assault weapons, and more—but that's precisely what President Trump and Attorney General Sessions have decided to do.”

The Department of Defense did not immediately respond to request for comment from Task & Purpose. We will update this story with more information as it becomes available.