A cadre of workers at the Norfolk Naval Shipyard funded and operated a private, undocumented police force equipped with illegally... 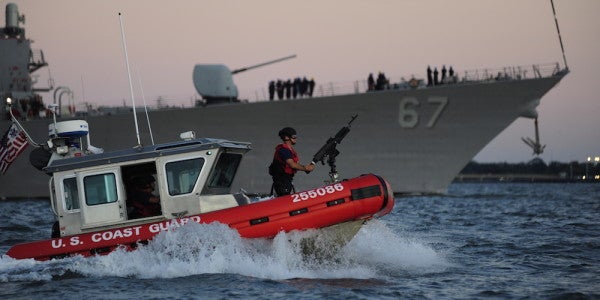 A cadre of workers at the Norfolk Naval Shipyard funded and operated a private, undocumented police force equipped with illegally obtained weapons, equipment, and vehicles totaling $21 million for more than a decade, according to an internal investigation conducted by Naval Sea System Command’s inspector general.

According to an explosive report from Federal News Radio published on Aug. 21, a group of unarmed guards and security officials at Norfolk Naval Shipyard in Portsmouth, Virginia, conspired to exploit cash to beef up security at government facilities deemed potentially vulnerable to terrorist attacks after 9/11, doling out cash to establish an “unauthorized law enforcement agency” outfitted with “firearms, boats, law enforcement badges, vehicles (complete with fictitious license plates) and an armored personnel carrier that they emblazoned with the word ‘police.’”

“These folks are not law enforcement, but they wanted to be, and all of their actions were done to become a law enforcement organization,” NAVSEA investigator Peter Lintner told the Federal News Radio. “The stunning thing is that this happened over the course of seven commanding officers, and not a single one of them put a stop to it or really even had any visibility on it.”

Sailors participate in an anti-terrorism security drill in the hangar bay of aircraft carrier USS Harry S. Truman during a condensed incremental availability period at Norfolk Naval Shipyard in May 2015.Photo via DoD

The group’s private arsenal included $4 million in ballistic combat armor, high-tech firearms accessories, thousands of rounds of ammo, and at least 92 vehicles liberated “illegally” up from a nearby Defense Logistics Agency depot “without any valid mission requirement,” including a $150,000 interdiction boat once used to chase down a random jet-skier and an armored personnel carrier that reportedly ended up stashed behind an impromptu wall of hedges and barbed wire, according to Federal News Radio.

Much of the property remains unaccounted for to this day, and according to Federal News Radio, NAVSEA only undertook its internal investigation after both military and federal prosecutors, including the Naval Criminal Investigative Service, declined to pursue the case. Even more alarming, the branch’s findings only became public in August 2017 despite the fact that the command concluded its probe and published its findings in 2014 (NAVSEA and NCIS did not immediately respond to requests for comment from Task & Purpose.)

So why are we only hearing about this now? Lawmakers want to know the same thing: On Aug. 25, Rep. Jackie Speier penned a furious letter to newly installed Secretary of the Navy Richard Spencer regarding the branch’s apparent inaction in addressing the problem with the legislature. As of Sept. 5, Speier’s office had still not received a copy of the IG report despite inquiries to both Spencer and Chief of Naval Operations Adm. John Richardson. (The Naval Inspector General could not immediately provide the report in question when reached by Task & Purpose.)

“As a member of the House Committee on Armed Services, I have heard multiple urgent pleas from the Pentagon for more funding to address a 'readiness crisis,' with shipyard maintenance highlighted as an urgent concern,” Speier wrote. “It’s therefore particularly concerning that the Navy could allow such waste to continue for years, ignored by installation leadership and criminal investigators.”

The public revelations surrounding the ad-hoc militia at the Norfolk Naval Shipyard came a month after a Government Accountability Office report detailed a “sting” involving the Defense Logistics Agency in which the GAO managed to acquire some $1.2 million in military surplus equipment through a completely fictional law enforcement agency, from small arms and night-vision goggles to EOD robots and armored MRAP vehicles. Given the scope and duration of the $21 million Norfolk scam, it seems likely that lawmakers will turn up the heat on the branch over the improper distribution of military equipment.

“There is no plausible explanation for the egregious waste, misuse of federal property and outright theft that was allowed to occur under numerous commanding officers,” Speier said in an Aug. 30 statement to Federal News Radio in the aftermath of its initial story. “No one in the Navy appeared to demonstrate any concern about these abuses, despite obvious red flags. Seven different commanding officers were either oblivious to or complicit with what was going on.”

She added: “Either way, the public deserves accountability and I expect real answers to my questions about this violation of the public’s trust.”