The Cash, Bribery, And Prostitution Scandal That Continues To Haunt The Navy

Leonard Glenn Francis, aka “Fat Leonard,” is at the center of a scandal that has plagued the Navy for years.... 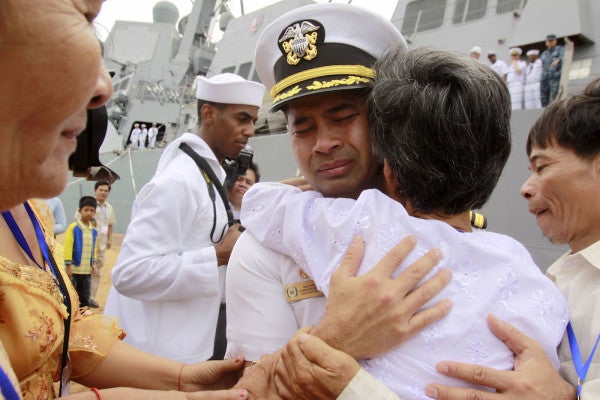 Leonard Glenn Francis, aka “Fat Leonard,” is at the center of a scandal that has plagued the Navy for years. Fat Leonard was the CEO of Glenn Defense Marine Asia, or GDMA, a Singapore-based supplier of maritime services and naval logistics. GDMA is a husbanding agent, which manages such sundry services as arranging for tugs, docking, fuel, and supplies for the Navy when it visits a foreign port. Leonard was arrested in San Diego in November 2013.

In January 2015, Francis pleaded guilty to charges of bribery, conspiracy to commit bribery, and conspiracy to defraud the United States. He admitted to providing Navy officials with millions of dollars in gifts and expenses, including luxury travel, $500,000 in cash, and prostitutes. His sentencing is scheduled for later this year.

In exchange for bribes, Francis received confidential ship schedules for the Navy’s 7th Fleet, along with pricing information about bids submitted by competitors. This allowed his company to overcharge the government in excess of $20 million. As part of the plea, Francis and GDMA agreed to forfeit $35 million.

The following is a list of members of the Navy who have been punished, listed by seniority junior to senior:

It is obvious from the above list that the more senior the individual the less severe the punishment. This is not an exhaustive list, as the Navy has not released a comprehensive list of personnel involved in the Fat Leonard scandal.

Preferential treatment for general officers and admirals is not limited to the Navy. It has been a recurring issue in all of the military services.

The recent testimony of Secretary of the Navy Ray Mabus illustrates this point. During a Senate hearing on Mar. 10, in response to Sen. Claire McCaskill of Missouri who asked about the accountability of those senior leaders under whom this scandal occurred, Mabus responded, “I have already issued letters of censure to three admirals [Miller, Pimpo, and Kraft], one three-star, two two-star admirals. The two two-stars [Pimpo and Kraft] elected to retire. The three-star [Miller] had already decided to retire.”

The reality is that the three admirals — Miller, Pimpo, and Kraft — received no punishment. These letters of censure are completely meaningless. According to Navy regulations, a letter of censure is a communication “to subordinate officers that may be in the nature of a reprimand” and “a copy of the letter will be filed in the official record of the member.”

Take the example of Miller. He last served as superintendent of the United States Naval Academy, a post from which he was scheduled to retire from in July of 2014. During his retirement ceremony he was awarded a medal for distinguished service and thanked by Mabus for his “incomparable service.”

The letter of censure, or reprimand, will be placed in Miller’s official Navy record. But it will not impact his pay, he will not serve any time in the brig, he will not be fined, nor demoted. Additionally, under current regulations, Miller will make “considerably more” in retirement pay than he did on active duty. Thus, in Miller’s case, this letter of censure resulted in a pay raise. It is difficult to characterize this holding Miller accountable.

Undoubtedly, letters of censure are absolutely meaningless and have no impact on the lives of these senior officers.

It may be that these senior officers were just less culpable than the junior personnel who received substantially more punishment. We don’t know. The Navy press release issued on Feb. 10 gives scant details about the incident. The review by the Navy “concluded that these officers [Miller, Pimpo, and Kraft] violated the Standards of Ethical Conduct, U.S. Navy Regulations, and/or the Joint Ethics Regulation, demonstrating poor judgment and a failure of leadership. … the solicitation and acceptance of these gifts … cultivated an unacceptable ethical climate within the respective commands.”

Were these “gifts” a nominal amount, for example, a meal that was $5 over the regulatory limit, or a substantial amount, such as a $5,000 bribe? Did these senior officers “solicit” insubstantial gifts, such as unit coins, or much more insidious gifts, such as prostitutes? We will never know, as details of these administrative actions were not released by the Navy. But given the actions of the other junior personnel involved in the Fat Leonard scandal, this disregard for ethics is not unheard of.

What we do know is that each of these admirals violated the Joint Ethics Regulations, violations of which are punishable under the Uniform Code of Military Justice. That is to say, each of these admirals could have faced a court martial. But they did not, they received essentially meaningless letters of censure and were allowed to retire.

An even more pernicious form of favoritism is taking no action against senior officers. The cases of Branch and Loveless illustrate this point.

It is abundantly clear that true punishments do not go into the rarefied air inhabited by flag officers.

The failure of the Navy to hold senior officers accountable concerns the rank and file of the military. According to an active-duty Navy captain quoted by the Navy Times, “When around and say that there isn't a trust deficit between junior officers and senior leadership, it's things like this that call b——- on that.”

To ensure trust in the military justice system by all service members, it is imperative that all members of the military are treated equally. Allowing an untouchable cadre of general officers and admirals to lord over the great unwashed masses of the military breeds contempt and distrust of the institution. This must end. Our all-volunteer military must be equally held accountable for their actions, from seaman recruits to admirals.