Until recently, the closest twins Carter and Jack Hanson ever got to experiencing World War II naval history were the... 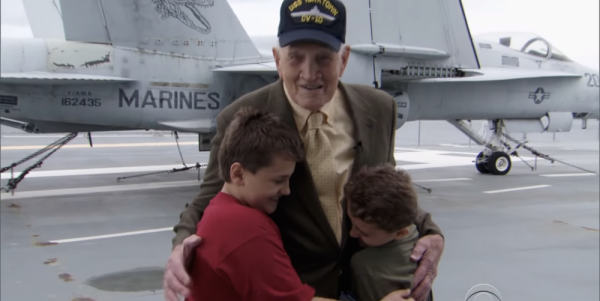 Until recently, the closest twins Carter and Jack Hanson ever got to experiencing World War II naval history were the times they played the living room board game Battleship in their Raleigh, North Carolina, home.

Then they took a family trip to Charleston, South Carolina, to visit the retired aircraft carrier USS Yorktown, where they met a woman who told them her brother had served on the carrier during World War II, reported NBC’s WCBD news station. They exchanged emails, and since April 2014, the boys have been corresponding regularly with their new pen pal, 90-year-old Robert Harding.

The boys sent photos of themselves and the present-day carrier to Harding’s home in Stillwater, Oklahoma, in exchange for priceless first-hand information on what it was like to serve on the Yorktown during the latter half of World War II. Commissioned in April 1943, the well-traveled Yorktown supported American landings in New Guinea and Iwo Jima, launched planes that hit the Japanese carrier Zuikaku in 1944 and the massive battleship Yamato in 1945, and survived its own damage from an enemy bomb in March 1945.

After a year of correspondence, war buffs Carter and Jack had a wealth of knowledge about the Yorktown. They could explain in detail Harding’s daily duties as an aircraft handler and his contributions manning an anti-aircraft gun, as well as what he looked like in his Navy uniform as a young sailor. When the twins crawled into bed at night, Harding’s photo was at their bedside.

Nearly five hundred World War II veterans pass away every day, according to Veterans Administration figures, but Carter and Jack were hopeful they would get to meet Harding in the flesh before his time came. “If I actually met him I would be like, ‘You are a true hero,’” Carter told NBC in November of last year.

Their lives had intersected on paper, but they knew seeing Harding with their own eyes would be a far more powerful experience, just as seeing and touching the Yorktown had made them appreciate history more than they ever had before.

“We want to know what his voice actually sounds like,” Carter recently told CBS News correspondent Steve Hartman, his eyes filling with tears as Jack consoled him. “We want to touch him. We want to know him a lot more.”

On their latest trip to the aircraft carrier, Yorktown staff arranged a special surprise for the twins. They were escorted to a room in the ship’s interior, where a frail man 80 years their senior sat silently at a table. For a moment, the boys hovered hesitantly near the doorway, before their faces lit up in recognition of who this man was.

“That’s right,” he replied, as the boys rushed to his side to share the hug they had waited a year for — and for which Harding had waited 70 years. That’s because Harding had rarely talked to anyone about his war stories since his service aboard the Yorktown, until Carter and Jack asked to hear them.

“I guess I needed somebody to talk to about it,” Harding told CBS. “It’s surprising the way it worked out.”

Together finally, the trio spent the day touring the ship they were already familiar with, retracing the daily steps Harding took 70 years ago.

“We don’t know about how we’ve changed his life, but we know that he obviously changed ours,” Carter told CBS.

Watch the boys finally meet their hero in this heartwarming CBS News segment.