“When a soldier is deployed or on base, they feel secure because they have all the other soldiers there watching... 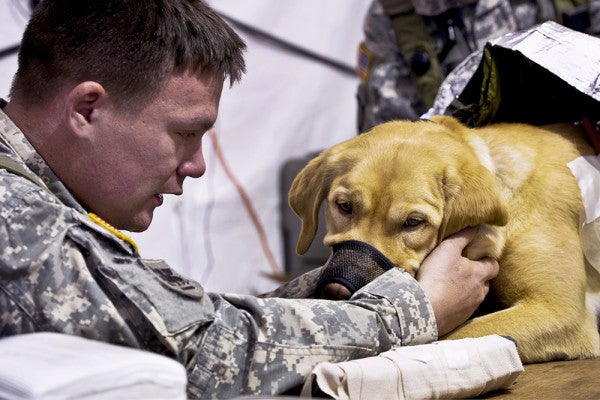 “When a soldier is deployed or on base, they feel secure because they have all the other soldiers there watching their back. But when they are out of the military, when their spouse goes to work, their kids go to school and they’re left alone, they have nobody watching their back,” says Phil Ruddock, an Air Force veteran who suffered a traumatic brain injury during Desert Storm, who now works with Brother’s and Sister’s in Arms, a nonprofit that pairs veterans with service dogs adopted from shelters.

“It makes them very anxious, paranoid. A dog turns out to be their battle buddy and watches their back. It never leaves them, it never judges them, it never asks questions that they don’t want to answer. It gives them unconditional love.”

Ruddock started the nonprofit in 2012 after losing his job, and suffering a nervous breakdown. He spent weeks in isolation, spiraling downward, until a friend brought a pitbull named Mia by his house for Ruddock to train. “She was as beat up and as messed up as I was,” says Ruddock. “She kind of rescued me.”