The Naval Academy May Have To Stop Calling Students ‘Midshipmen’

Students at the U.S. Naval Academy in Annapolis, Maryland, may see the end of the long-standing rating, midshipman. On Jan.... 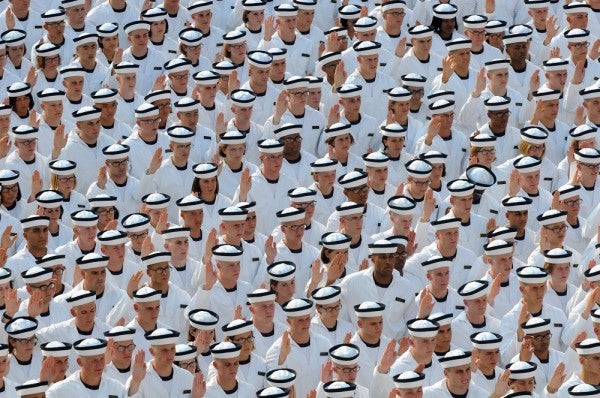 Students at the U.S. Naval Academy in Annapolis, Maryland, may see the end of the long-standing rating, midshipman.

On Jan. 13, Secretary of the Navy Ray Mabus directed Chief of Naval Operations Adm. John Richardson to review more than 20 ratings that reference “man” in their title in order to determine if they should be made more gender-neutral. The review's findings are due to Mabus on April 1.

In addition to time-honored titles like seaman, airman, and fireman, the Naval Academy’s midshipmen may be in for a change; whether that becomes midshipmate, or something else entirely is still unclear.

Annapolis is one of five federal service academies, and female students there make up 25% of the officers in training, notes Capital Gazette.

If the Navy rules that the term midshipman should be replaced with something more gender-neutral, it could pose an interesting dilemma for both the Naval Academy’s athletics program and other federal agencies and institutions using the same title.

Related: The Navy’s uniform changes are anything but gender neutral.

The Navy’s athletic program was created 25 years after the academy was founded in 1854, and currently has 30 varsity sports teams — 17 men’s, 10 women’s, and 3 co-ed — all bearing the team name, Midshipmen, or Mids for short.

“It makes a difference to have a gender-neutral title because it doesn't create an institutional barrier to you doing your job,” said Kyleanne Hunter, a former Marine Corps pilot, and co-founder of the Think Broader Foundation, in an interview with Capital Gazette. “Language subconsciously shapes our values and culture.”

The U.S. Naval Academy and the Merchant Marine Academy are the only two schools that call their students midshipmen; at the other three academies, students are referred to as cadets. Additionally, participants in the Navy Reserve Officers Training Corps also go by midshipmen.

“The 'midshipman' rank is not a Naval Academy-only rank,” said Cdr. John Schofield, a Naval Academy public affairs officer, in an email to Task & Purpose. “It is a Navy rank that applies to students at USNA and ROTC units across the country.”

Schofield added that if asked, the Naval Academy “will provide substantive input and feedback in the interest of meeting the intent and direction of the Secretary of the Navy and the Chief of Naval Operations.”

Changing the names of job titles is nothing new to the Navy. Since its founding the service has altered the names of 700 rates, according to Capital Gazette.