Were you not thrilled when the Navy decided to bring back the “Cracker Jack” dress blues in October 2016? The... 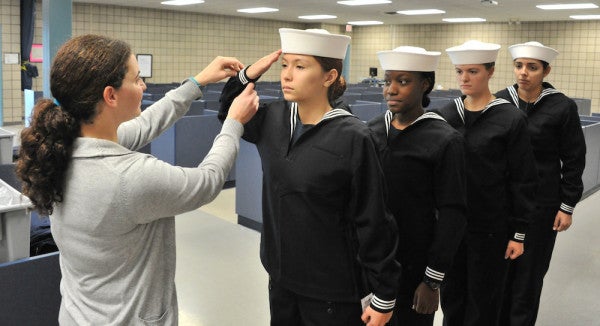 Were you not thrilled when the Navy decided to bring back the “Cracker Jack” dress blues in October 2016? The Navy wants to know.

After implementing several uniform changes for female sailors — including a unisex dress cover for officers and chiefs, the enlisted white “dixie cup” dress cover, the choker-style dress coat for officers and chiefs, and the enlisted “Cracker Jack” dress blues — the Navy has decided it needs to know if you actually like them. You know, because it’s better to ask if you want to wear these items after starting to issue and requiring you wear them through 2020, despite the fact initial that wear tests revealed strong opposition.

“Discussions in online forums for female leaders in the Navy suggest that the Naval Academy wear tests were overwhelmingly against the changes,” wrote Andrea Goldstein, a former naval officer.

Protests from female sailors regarding the dixie cup cover led its mandatory wear date to be pushed to October 2018. Outreach efforts and a coordinated refusal by servicewomen to purchase the cap, when then-President Barack Obama signed the 2017 National Defense Authorization Act, superseded the requirement to purchase it. What’s more, the sailors’ advocacy made Congress to take notice.

The effort forced legislation that requires the secretary of the Navy to be transparent about the composition of wear test groups and the results, stipulates that wear test groups be representative of female personnel, and identifies costs as a fraction of service members’ pay.

As mandated in the 2017 NDAA, the Navy is now required to survey 8,000 randomly selected female sailors, including active-duty and Reserve sailors of all ranks, about the new uniform items, which were designed to create unisex uniformity among all sailors.

Related: How Female Officers Forced The Navy To Back Down On Uniform Changes »

Navy Secretary Ray Mabus told Military.com that decision to change the uniforms came about when he realized that it was impossible to distinguish West Point cadets by gender as they marched onto the field at an Army-Navy game.

“The cadets marched out in absolutely gender-neutral uniforms. Mids marched out and you could tell what the women wore by their covers,” he said.

Lt. Jessica Anderson, a spokesperson for the chief of naval personnel, told Military.com, “We will conduct a thorough analysis of the survey responses as quickly as possible. The results of this survey will be used to inform the Navy's way ahead on a number of uniform matters we know are of interest to female sailors.”