The Navy is finally bidding adieu to the horrible blue Navy working uniform. As sailors across the globe rejoice that... 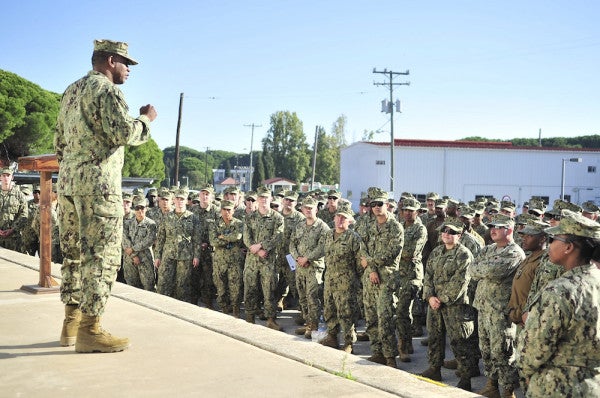 The Navy is finally bidding adieu to the horrible blue Navy working uniform. As sailors across the globe rejoice that they can hang up their aquaflage forever, the service has selected digital Woodland pattern camouflage as the Navy's new working uniform.

Known as NWU Type III, the green and tan print has been worn by expeditionary sailors for six years.

“It's a change of color really, but I think it’s pretty awesome,” Petty Officer 3rd Class Jose Menjivar, who is an aviation boatswain's mate, told Navy Times. “I had a chance to wear the uniform, it's pretty comfortable.”

The introduction of this uniform also present several new rules for wear. The collar has been altered, for one. And rank insignia will now by worn on the chest, not the collar. What’s more, “Don't Tread on Me” and reverse U.S. flag patches may be authorized for wear pending the approval of the unit commanding officer.

In August, Navy officials said that they expect the effort to field the new duds will cost roughly $180 million over five years.

Recruits will be issued the new camouflage beginning in October 2017, and it will be rolled out to the rest of the sailors through 2019. Sailors should be able to purchase the new uniform through Navy Exchange uniform stores beginning in 2017, and enlisted allowance will be adjusted to cover costs of these uniform changes and requirements.

Sailors will no longer be allowed to wear blue camouflage after Oct. 1, 2019.

The blue digital camouflage uniforms, referred to by sailors as “blueberries,” were intended to become the Navy’s main uniform. Unfortunately, the fabric was uncomfortable and heavy, not flame retardant, and sailors suggested to Navy Times that the camouflage was only effective if someone fell overboard.