This Might Be The Worst Fake Marine Of All Time

A 47-year-old man was recently arrested in upstate New York for impersonating a Marine, according to a report by Lou... 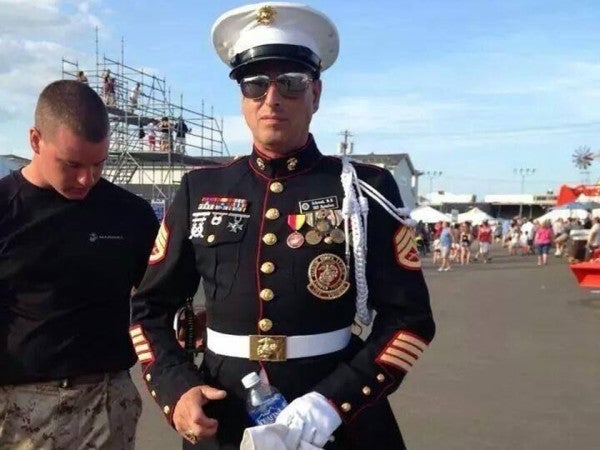 A 47-year-old man was recently arrested in upstate New York for impersonating a Marine, according to a report by Lou Michel with the Buffalo News.

The man, Michael R. Schrenk was a particularly terrible fake Marine. Just from a cursory look, he wore sunglasses in his dress blues, shooting badges on his dress blue alphas (including two different rifle badges), the wrong ribbons (which were out of order and far too many of them), random medals, way too many service stripes, the wrong sword, and to cap it all off … a giant white ceremonial cord over his shoulder.

Public service announcement: If you’re thinking of impersonating a Marine, don’t. There are Marines and Marine vets everywhere. No matter how many Wikipedia or about.com entires you read, we can tell. And we will call you out in an undiplomatic manner.

Schrenk was spotted at the Erie County Fair and confronted by real Marines who he foolishly engaged in conversation. They brought him to the attention of a New York State police officer, Michael J. Niezgoda, who happens to be a highly decorated Marine who was wounded in Iraq and is now a member of the Marine Corps Reserves’ local recruiting command, according to the Buffalo News.

And so last week, New York State police announced they raided his home and arrested him for his phony galavanting.

Schrenk was charged with violating two New York State laws relating to impersonating a member of the military — unlawfully wearing a military uniform and unlawfully displaying a military rank — and released on his own recognizance, according to the report. He is due in court later this week.

And if this story could not get any weirder, according to the Buffalo News, Schrenk actually did serve honorably in the Armed Forces, in the Navy. [Editor’s note: This reporter is resisting the temptation to offer this as evidence that all sailors secretly yearn to be Marines.]