Why The National Guard Needs Its Community Connection

It was a beautiful spring evening as my convoy traversed the country roads en route from our state training area... 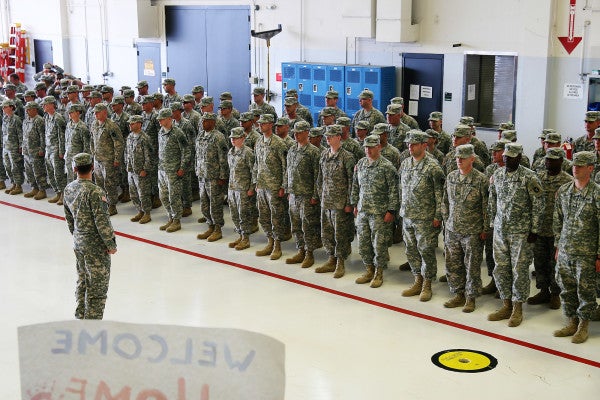 It was a beautiful spring evening as my convoy traversed the country roads en route from our state training area back to the armory. It had been a weekend of continuous field operations for my unit, and the soldiers, while tired, were happy to have conducted solid training. As we passed through the small villages and towns, people would wave, honk, or yell, “Thank you,” to the convoy as it rolled by. In a few cases, families stopped their barbecues to stand alongside the road together and wave as we went by. I was struck with the thought that if I was on active duty and coming back from the training area, this would never happen. The National Guard’s community connection is truly unique. And unfortunately, we’re on the verge of losing it.

The National Guard as a concept first originated in the 1890s but the idea of an organized militia has been in existence since the 1600s. Descended from the English militia system, the National Guard is founded on a legal status that gave civilians the authority to bear arms and use them in times of crisis. Over the centuries, it has been as much a political as military organization. During the Constitutional Convention of 1787 and the subsequent debate between the Federalists and Antifederalists, the role of the militia versus national army was hotly debated. Thomas Jefferson, for one, came out strongly in favor of a volunteer militia, arguing that it would be firmly rooted in the community and therefore have more to fight for. The ensuing War of 1812 demonstrated that a militia alone was not effective for national defense, but on many occasions the militia came out in force to defend their homes and families.

After the establishment of the National Guard in 1893 and the subsequent National Defense acts of 1903 and 1916 that gave the regular Army more purview over the Guard, it still remained a community-centric organization. The development of permanent state and federal-funded armories in community centers helped keep the National Guard in the public eye. Armories themselves became centers of community events, such as dances, meetings, and courses of instruction. They were purposely placed inside the community to reflect from where the National Guard drew its base of manpower and support.

When National Guard units were mobilized in 1898 during the Spanish-American War, 1916 during the Mexican Border Expedition, and 1917 during World War I, the communities came out to see them off in style, because they were the sons, fathers, and brothers of everyone in the town. When the trains returned in the dreadful summer and fall of 1918 bearing flag-draped coffins, the communities received their loved ones with solemnity and mourning. And when the troops came home, their communities welcomed them with parades, fetes, and other outpourings of appreciation. These scenes continued throughout the 1940s as the National Guard units mobilized and left for Europe and the Pacific.

Of course, this came with downsides. Nepotism was common within the Guard (some might say it still lingers) and training events were often less about training and more about camaraderie. The stereotype of the “weekend warrior” developed from this propensity to get together and drink beer rather than do Army training to the standard. Guard discipline was noticeably more lax than the Army because it was hard for people who had been friends all their lives to make necessary unpopular decisions. These are broad statements and do not reflect all units, of course. Training, readiness, and equipping often lagged behind the regular Army, making many question if the Guard could really augment the regulars as part of the “Total Force” concept in the event of a large conflict.

Things changed after 9/11. The National Guard entered an unprecedented era of readiness and deployments to the Middle East and Southwest Asia. Guard units received new equipment at the same time as the Army through the rapid fielding initiative prior to deployments. Training went from in-state venues to individual and unit training alongside regular Army personnel at regular Army facilities. Readiness grew as units filled with experienced personnel with multiple combat deployments. Where combat patches and badges were once hardly seen in the Guard, they now became the norm. The Guard took its place alongside other components in long-term planning and strategy, moving toward a new professionalism among citizen soldiers.

Fourteen years of war has taken its toll on the Guard. As it has shifted its priorities to meet those in Washington, it has moved away from its communities. New armories are no longer multi-purpose drill halls, but state-of-the-art military facilities for military use only. Most are so large that they have to be built outside the community centers and are inaccessible to the public. Out of public sight, the Guard takes on the auspices of the Army. Although the Army enjoys a level of confidence and trust among the general public, the old American tradition of distrust of a standing army is still an undercurrent in society. The Guard has often bridged this gap, putting common soldiers in the public light where they can be seen and recognized for what they are: normal people. The Guard has made the soldier relatable.

As it stands now, the National Guard runs the risk of losing the community touch completely as it becomes more aligned with the regular Army. If this trend continues, it could lose touch completely and sever the vital community links that make the Guard unique among the armed forces. This would be an unmitigated disaster. The American people need that link between themselves and the military, and the Guard is that link. As Army leadership contemplates force structure and the future role of the Guard in national policy, it must consider the role of the Guard in the community. We cannot lose sight of our roots.