31 Veterans Are Headed To The Paralympics With Team USA

Beginning Sept. 7, a team of athletes will compete in Rio de Janeiro across 23 sports in the 15th Paralympic... 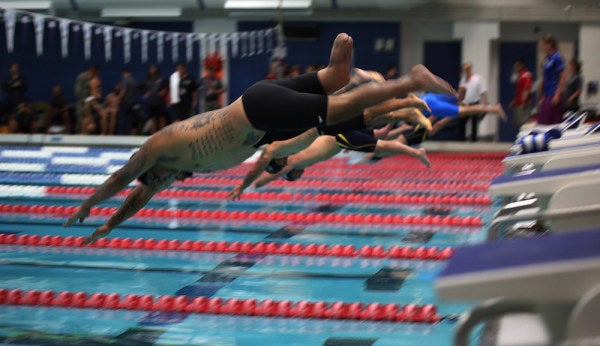 Beginning Sept. 7, a team of athletes will compete in Rio de Janeiro across 23 sports in the 15th Paralympic Games.

Many of these paralympians have persevered in the face of illness, injury, and stigma to make it to this year’s games. Perhaps none more so than the 31 military veterans who are part of the U.S. Paralympic Team. A number of them were made eligible through accidents or combat injuries, and have used exercise as a means of rehabilitation. But a greater passion for the sports they found has brought them to Rio for gold and glory on the world stage.

Shafik began the lifting in 1997, in Iraq. He served in the Army for more than 10 years as an engineer. After competing as a weightlifter under brutal conditions in Iraq, he fled to the United States.

Madsen suffered a spinal cord injury in 1993 while serving in the Marine Corps. Since then, she has overcome that injury and breast cancer to make it to Rio in 2016.

Snyder lost his eyesight to an IED explosion while serving in the Navy in Afghanistan. He is the current world record holder for the blind 100-meter freestyle.

Retired Marine Corps Sgt. Anthony McDaniel gestures to a friend after medaling in track and field during the 2016 Invictus Games in Orlando, Fla. May 11, 2016.

An improvised explosive device cost McDaniel his legs and left hand in 2010, while he was serving the Marine Corps in Afghanistan. After recovering, he found solace in para track and field, basketball, and rugby.

Regan served in the Missouri Army National Guard. In 2011, he was named USA Volleyball Male Sitting Athlete of the Year at the  Parapan American Games.

In 2007, Army Staff Sgt. Sibayan was involved in three IED incidents. The last one resulted in severe traumatic brain injury that left him permanently disabled. He competes with cerebral palsy.

Stuck was serving in Iraq with the Army’s 101st Airborne Division when an IED cost him his right leg below the knee. Though he was a soccer player before the amputation, he relished the chance to be on the men’s sitting volleyball team.

While serving as an Army combat medic in Iraq in 2010, Marks suffered severe hip injuries that left her with no sensation in her left leg. Swimming was original her form of rehabilitation.

Krige was serving the South African Army when he lost both his legs, a finger, a yard of his small intestine, and part of his stomach, and nearly died at the field hospital in 1987. In 1997, he moved from South Africa to the United States, so that he could train for the 2000 Paralympic Games. The move was only supposed to be temporary, but his family instead chose to become permanent US residents, so he then switched teams. After competing in wheelchair marathon racing at three Paralympic Games, he switched to the para triathlon in 2004.

Across three tours in Iraq with the Marine Corps, Martin was involved in two IED explosions. He received a Purple Heart for the first, and the second resulted in a temporary loss of his ability to walk or read.

Schuble attended West Point, and during a hand-to-hand combat class she sustained a TBI. She sustained a second brain injury in a car accident, and in 2004, was diagnosed with multiple sclerosis.

Jones began running the triathlon during her college years at West Point, after she suffered an injury her junior year or college and spent a lot of time in the water because couldn’t run.When she separated after serving in military intelligence, she began training full time.

U.S. Marine Pfc. Jese Schag spikes a volleyball against the Army team during the championship match of the inaugural Warrior Games' sitting volleyball competition at the Warrior Games in Colorado Springs, Colo., May 13, 2010.

Schag was in the Marine Corps from 2008 until 2011, though he lost his right leg in 2009. An all-around athlete, he won gold in sitting volleyball, gold in wheelchair basketball and bronze in the 50-meter breaststroke at the 2010 Warrior Games.

In 2004, Joss joined the Army as a member of the service’s marksmanship unit, but in 2007, he lost a portion of his right leg to a convoy ambush. Five years later, a fellow soldier told Joss about the paralympic shooting team, which brought him to Rio this year.

Williams was injured in a Humvee accident while serving in Iraq with the Army. However, in 2014 and 2015, he won gold medals in javelin and discus in the U.S. Paralympics track and field national championships.

Brunais served in the Army for 10 years, and eight years with the 75th Ranger Regiment. He separated with a Purple Heart.

U.S. Navy Petty Officer 1st Class John Kremer reaches for a block as the U.S. team competes against the British team during the sitting volleyball finals at the Invictus Games in London, Sept 14, 2014.

After serving nine years as an explosive ordnance disposal technician in the Navy, Kremer stepped on a land mine and lost both legs below the knee. At the 2014 Invictus Games, he captained the men’s sitting volleyball team, which won silver.

Smith served in the Marine Corp for 10 years. His right leg was amputated after he had severed his Achilles tendon and multiple arteries when a 12-gauge shotgun round hit his right ankle.

An Army veteran, Miller became an amputee as a result of being hit by a drunk driver. Before she joined the women’s sitting volleyball team, she played wheelchair basketball.

Coryell is an Army veteran who was diagnosed with rapidly declining multiple sclerosis, but still managed to make her international archery debut in 2015.

Former Soldier Melissa Stockwell, from Chicago, speaks to her fellow injured servicemembers during one of the annual Paralympic Military Sports Camps at Balboa Naval Medical Center in San Diego.

As a first lieutenant in the Army, Stockwell was the first female soldier to lose a limb in the Iraq War. She was also the first Iraq War veteran to be selected to compete in the Paralympics in Beijing in 2008.

While serving with the Army in Iraq, Lukow lost his right foot and injured his left during an explosion. Archery was the sport that he picked up during rehabilitation.

Sanchez served in the Marine Corps, but suffered spinal cord injury following a motorcyle accident in 2001. He won Paralympic medals for cycling in 2008 and 2012.

An Army paratrooper, Collins was cycling with friends when she was struck by a car after a tour in Iraq in 2006. She lost her left leg below the knee. After rehab, she not only returned to airborne status, but deployed to Afghanistan again in 2009.

After leading over 700 patrols in Iraq and Afghanistan with the Marine Corps, Wishnia’s right leg was injured in a combat explosion. He credits Paralympic track and field with saving his life after rehabilitation.

Tucker served in the Air Force and spent 11 years with the Defense Department. After a motorcycle accident took her left arm in 2010, she began competing in archery.

Severn was struck by lightning while on duty at Camp Grayling in Michigan. The hit tossed him 40 feet and caused severe burns and nerve damage. As a result, he is an incomplete quadriplegic. In 2008 and 2012, he medaled in the Paralympics for discus, javelin, and shot put.

Related: 10 powerful photos that will change your mind about what it means to be an athlete

Jahn served with Army Special Forces. During his last tour in Afghanistan, a operational injury almost cost him his ability to walk. In July 2014, he made the cut for the men’s Paralympic soccer team.

Retired U.S. Sailor William Groulx, center left, the U.S. wheelchair rugby team captain, holds the ball as members of the Great Britain team try to recover it during a match at the Paralympic Games in London Sept. 5, 2012.

A Navy veteran, Groulx injured his spinal cord in a motorcycle accident in 2001. He took back gold in wheelchair rugby at the Beijing Paralympic Games in 2008.

While working in Afghanistan as an engineer officer in 2007, Morelli was hurt by an IED that injured her neck, caused nerve damage and brain trauma, and left her without sight in her left eye.