This Vet Lost His Leg To An IED. Since Then, He’s Completed 26 Marathons

When the Twin Towers fell on Sept.11, 2001, Freddie De Los Santos fulfilled a childhood goal of joining the Army.... 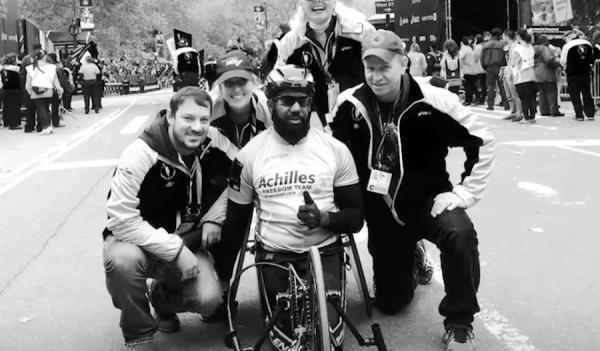 When the Twin Towers fell on Sept.11, 2001, Freddie De Los Santos fulfilled a childhood goal of joining the Army.

But on Oct. 20, 2008, while working in Afghanistan with U.S. Special Operations Command as a Humvee gunner, an improvised explosive device tore through his right leg. He smashed headfirst into the ground and lost his teeth in the blast that immediately followed. To make matters worse, De Los Santos was also shot twice, The New York Times reported.

But he’s come a long way since then.

Related: How The Military Community Helped A Survivor Of The Boston Marathon Bombing »

“I had suicidal thoughts. I just wanted to end my life because I was not the same. It used to break my heart every time my kids used to see me,” he told Katie Couric in an interview for Yahoo News.

Though De Los Santos suffered months of psychological trauma, he found solace by competing in marathons. After getting involved with Achilles International, a group of injured veterans that performs in mainstream races, De Los Santos has gone from an amputee to competitive athlete.

In fact, De Los Santos has completed 26 marathons — nearly 682 miles — with just one leg through the use of handcycles.

Now, he is training to make the Paralympic team in Rio.

De Los Santos added, “I will be so excited to go to Rio, not just because it’s Rio, but also because I will be able to look back and say, ‘Wow, this is how far I have come since the day I got injured.’ That will be the greatest achievement ever.”