Rob Jones, a Marine combat veteran and double-amputee, took a break from running after his fourth marathon in as many... 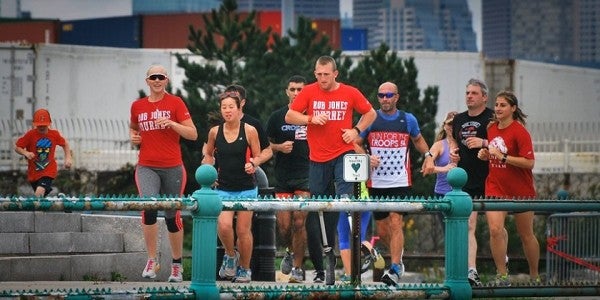 Rob Jones, a Marine combat veteran and double-amputee, took a break from running after his fourth marathon in as many days on Oct. 15. But he wanted to explain what kept him going.

“When a veteran comes home and they’re wounded, whether psychologically or mentally or physically, that doesn’t mean they’re now disabled, broken, or incapable of contributing to society,” Jones told the Boston Globe. Four marathons down, 27 to go.

A 32-year-old vet of the wars in Iraq and Afghanistan, Jones is running 31 marathons in 31 days to raise money for veterans’ charities, and he’s doing it on two prosthetic limbs. In 2010, while serving as a combat engineer in Helmand province in Afghanistan, Jones lost both legs above the knee when an improvised explosive device detonated under his feet.

Now, seven years after losing his legs, Jones has embarked on a 806-mile odyssey across two continents. On Oct. 12, the Virginia native completed the first leg of his journey, running 26.2 miles in Hyde Park, London, in a month of unofficial marathons. With four runs down, and a fifth one underway in Toronto on Oct. 16, Jones’ story is making social media rounds and garnering national attention.

“I’m trying to be an example of a veteran who’s had a traumatic experience overseas and I came back and I found my new way of helping society, staying in the fight, and contributing to my family and to America,” Jones told the Globe.

Jones, who grew up near the Potomac in Lovettsville, Virginia, was a freshman at Virginia Tech when he decided to drop out and enlist in the Marine Corps Reserve, deploying to Habbaniyah, Iraq, in 2008 and to Helmand’s volatile Sangin district in 2010. Four months into his second deployment, Jones was sweeping for mines ahead of a foot patrol when a Marine stepped on an IED that failed to detonate, according to Time magazine. As Jones moved to check for secondary and tertiary charges, the roadside bomb exploded, ripping into his legs. In the aftermath, the Marines on patrol rushed to apply tourniquets and stem the bleeding at great personal risk.

“Those guys didn’t know if there was another IED, but when I got hurt they just came over,” Jones told Time.

Jones’ injury resulted in a disarticulation of his left knee and an amputation above his right. He was medically retired in December 2011 and transferred to Walter Reed Army Medical Center in Bethesda, Maryland. There, he was outfitted with a pair of bionic knees and prosthetics legs, and he undertook the daunting task of relearning how to walk. As part of his physical rehabilitation, he took on rowing, and just two years after the explosion, Jones medaled in the 2012 Paralympics, according to MassLive.

Next came cycling. In the winter of 2013, Jones biked more than 5,000 miles from Maine to California — through that year’s polar vortex — and raised $125,000 for veterans’ charities. The race was the beginning of what’s now being called the “Rob Jones Journey.” Beyond the 31 trips across the finish line in 31 days, Jones hopes to raise up to $1 million for the three charities — Semper Fi Fund, Coalition to Salute America's Heroes, and Stephen Siller Tunnel To Towers Foundation — that helped in his recovery, according to his blog.

Once Jones finishes his run in Toronto, he’ll make his way to Detroit on Oct. 17, before ultimately wrapping up at the National Mall in Washington on Veterans Day. Though each day brings a different race in a new city, Jones told Time magazine that the mission remains the same.

“Hopefully,” he said, “when a veteran sees that I was able to lose both legs above the knee and still have a purpose, still be a part of society, still contribute to my family, they can picture themselves doing it.”