If you ever served in the military, chances are you’ve played the veteran card at least once. Maybe it was... 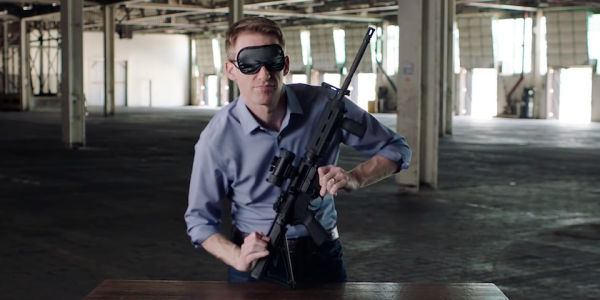 If you ever served in the military, chances are you’ve played the veteran card at least once. Maybe it was to get out of a speeding ticket, or to get a free drink at the bar, or, if you’re Missouri Democrat Jason Kander, to increase your chances of being elected to the United States senate.

In a new campaign ad, Kander plays the veteran card like a pro, demonstrating his knowledge of firearms by assembling an assault rifle … blindfolded. But this isn’t just an excuse for the 35-year-old Army vet to show off a cool trick he learned in basic training — it’s a retort to his political rival, Republican incumbent Sen. Roy Blunt, who is both a non-veteran and a fierce opponent of gun control laws.

“Senator Blunt has been attacking me on guns,” Kander says in the video, cooly snapping open the rifle’s bolt carrier with a flick of his wrist. “Well, in the Army, I learned how to use and respect my rifle.”

Borrowing a tactic used during the 1994 senate election by former U.S. Senator Bob Kerrey, who earned the Medal of Honor while serving as a Navy SEAL in Vietnam, Kander’s video is intended to paint a portrait of a man who is intimately familiar with the dangers guns pose when they fall into the wrong hands.

Kander served as a military intelligence officer. In 2006, according to his website, he deployed to Afghanistan, where he investigated “individuals suspected of corruption, espionage, drug trafficking, and of facilitating Al Qaeda and the Taliban.” But Kander was no pencil-pusher. As he explains in the campaign ad, he once volunteered to ride in a convoy of “unarmored SUVs” as an “extra gun.”

Whether Kander used his gun during that convoy isn’t clear, but one thing is: the experience helped teach him a valuable lesson about gun control — namely that we must keep assault rifles away from the bad guys.

“In the state legislature, I supported second amendment rights,” Kander says in the video, which Peter W. Stevenson of the Washington Post hailed as a top contender for the best ad of the election so far. “I also believe in background checks, so terrorists can’t get their hands on one of these.”

Then the blindfold comes off, and so do the gloves.

“I approve this message,” Kander says as he yanks on the rifle’s charging handle — symbolically chambering his final blow: a challenge. “Because I’d like to see Senator Blunt do this.”