Editor’s Note: The following story highlights a veteran who works at Farmers Insurance. Committed to filling its ranks with talented... 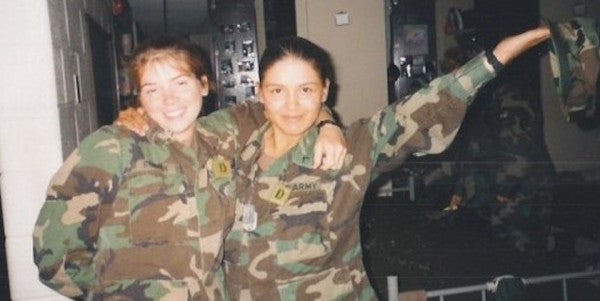 Editor’s Note: The following story highlights a veteran who works at Farmers Insurance. Committed to filling its ranks with talented members of the military community, Farmers Insurance is a Hirepurpose client. Learn more here.

When looking for post-military work, it’s easy to see only what’s instantly available to you — and that’s usually a position without a lot of room for growth or exploration. But your time in the military shouldn’t keep you from finding a career that allows you to move up the ladder and grow as a person, and Farmers Insurance is helping veterans find their new purpose.

U.S. Army veteran Carrie Bonney, 41, the director of public relations for Farmers, joined the company in 2003, and what started as a job for her quickly grew into a long-term career. She started out as a claims adjuster, a fairly entry-level job, but quickly moved up the ranks before landing her current gig.

“I saw my first job at Farmers as a way of getting my foot in the door,” Bonney said. Now, as the director of public relations, Bonney helps show others what it is she loves about the company. “I work with and for a lot of great people,” she said. “The senior executives really care about the employees and making sure they’re happy.”

Before joining Farmers Insurance, Bonney spent five years in the Army working as a military police officer, and as her time in uniform wound down, she started taking night and weekend classes so she could get her associate’s degree and a head start on her post-military life. Then, once she’d been discharged, she dove headfirst into civilian life, working full-time and taking classes.

“It was a very different experience than my friends had going to college right out of high school,” Bonney said. “A lot of things were frustrating to me, and didn’t always understand why.”

Bonney found the college experience uniquely challenging, especially because her fellow students were much younger and didn’t have the real-world experience that she possessed. Bonney, however, needed a different kind of assistance settling into college life. Once she figured out how to navigate academia, it became easier for Bonney to find her path, and she eventually got a master’s degree in criminal justice.

Her interest in insurance came later, after she spent some time working at a private investigator’s firm. It was that job that led her to Farmers Insurance — and her career.

“The number one thing that’s helped me in my career is the leadership ability I gained from the Army,” Bonney said. “You learn to be a leader from day one in the military. We take challenges on with a different perspective.”

For Bonney, the first challenge at Farmers was going from a claims adjuster working on disaster claims to becoming a supervisor working as part of a catastrophe team. She spent five years traveling as part of that team, and then eventually took over internal catastrophe communications. From there, she started working more with the external communications team, and eventually, she made the jump into public relations. Bonney credits her military experience in part for her ability to move through the company and find the role that best suited her.

“Vets are a little more versatile,” she explained. “We take our time to learn and do the job right, even if we have to do it quickly. We take on challenges with a different perspective, and we reach a higher maturity level at a much younger age.”

As part of what Bonney refers to as “the Farmers family,” she’s able to tackle challenges as part of a team just like she did in the Army, and she feels the same sense of purpose that she did serving in the military.

A recent project involved helping to rebuild the city of Joplin, Missouri, for people who had no or bad insurance and lost their homes in a tornado. Farmers employees, Bonney among them, took part in rebuilding the city — for Farmers insurance customers as well as those who were uninsured. “Employee engagement went up for people who took part in rebuilding Joplin,” Bonney explained. “People feel a real sense of purpose working at Farmers.”

But living a purpose-driven life isn’t the only perk to a job at Farmers. For military vets who are used to being part of a team, a job at an insurance company may not seem like an obvious next step, but Bonney says that one of the biggest draws of her company is being part of something bigger than yourself.

“When you leave the military, you’re leaving a tight-knit group, and at Farmers, you’re joining another one,” she said. And that group is made up of a number of Bonney’s fellow veterans, who work for the company as both agents and full-time employees. And that, Bonney says, is part of the appeal of working for the company.

“Working with other veterans means you have a group of people who will understand you differently than people who haven’t been in the military,” she said. “It also helps to get in a more civilian mindset to have people to talk to and get feedback from those who’ve been through that transition before.”