Brendan Hart wanted to be a fireman, not a Marine. As a New Yorker who saw the devastation of the... 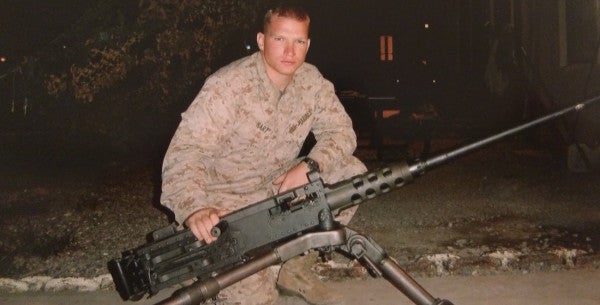 Brendan Hart wanted to be a fireman, not a Marine. As a New Yorker who saw the devastation of the Sept. 11 attacks first-hand, he felt a burn that all veterans can identify with: the desire to serve. He immediately tried to join New York Fire Department, but so did a lot of other people in the aftermath of the terrorist attacks.The waitlist was several years, forcing Hart to reevaluate his future.

With local service out of the picture, Hart — now a 34-year-old entrepreneur living in Brooklyn — decided to enlist in the Marines. Despite his initial reluctance, he knew he made a great decision marching across the parade deck at his boot camp graduation in 2002. His entire family gathered at Parris Island to see this unlikely event.

“Their expression said it all,” Hart remembers. “I realized that, to those who loved me, I would never be the same man.”

Related: The Green Beret Who Never Slowed Down After The Military »

Hart was selected for the elite fleet antiterrorism security teams, or FAST, unit. He quickly realized that he was going to be an unusual FAST Marine. Hart knew that military leadership was about much more than squad movements and overwatch, and he was determined to expose his Marines to more than the traditional training.

Before his team’s second deployment, Hart assigned them “The Great Gatsby,” and then report back on what they learned. “Gatsby is aspirational,” Hart says. “It was also about as far away as possible from our reality at that point. I wanted my team to know there is more to life than guns and war.”

After working on his education part-time in the Corps, Hart transferred to Dartmouth College once he left the Marines in 2006. At Dartmouth, he was immediately tested. He had to prove he could perform in a high-stress, insular campus full of over-achievers.

“I was the old guy in a sea of young, prep school-trained students.” Hart says. But something clicked during his first term. “I realized that I was motivated by fear — the fear that if I didn't do well academically and socially, other service members would not be afforded the same opportunity.” He didn’t want to deny others the chance to compete at this elite level, so he pushed himself even harder.

And, slowly but surely, momentum began to build. “My fear led to engagement, and engagement led to confidence,” Hart recalls. “Once you realize that you deserve to be at the table, there’s no secret that everyone knows but you, then everything changes. My mindset shifted from surviving to thriving.”

Hart credits his expanding circle of friends as a major force in his post-service success. “After I got out, I quickly learned that I did not know much about life beyond the Marine Corps,” he says. This realization pushed him to search for new knowledge. He read hundreds of books and sought out people with different opinions, a pattern that continues to this day.

Today as the CEO of Prosper, Hart supports veteran-led startups in the New York City area. He doesn’t like to use the popular term “entrepreneur” when describing himself, though. “Like many veterans, I’m a problem-solver and builder,” Hart says. “I love working with talented teams trying to build great companies. At a fundamental level, I’m helping them solve complex problems.”

Harts wants to see more veterans try their hand at entrepreneurship, but he cautions against false optimism. “Starting a business is not sexy,” he said, “It is brutal.”

But veterans are still the best group of people when it comes to creating the great companies that will propel American economic growth. Why? Simple, according to Hart: “Veterans possess near limitless raw horsepower, a necessary ingredient for success. You need hustle, a bias toward action, and willingness to learn. Building a company will take everything you have — physical, emotional, spiritual — and then some. We’re here to accelerate that process.”