Marcus Luttrell Has A Twin Brother And He’s A Neuroscientist

Morgan Luttrell was a Navy SEAL like his more famous twin brother, Marcus, who went on to write a bestseller,... 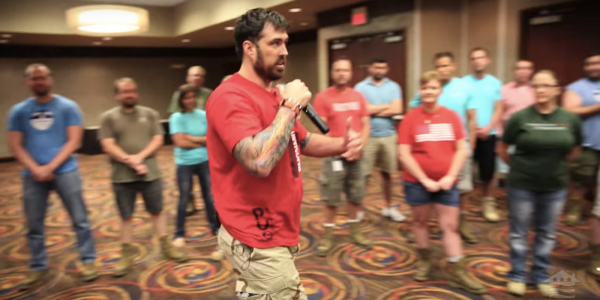 Morgan Luttrell was a Navy SEAL like his more famous twin brother, Marcus, who went on to write a bestseller, Lone Survivor, a first-person account of a harrowing battle in Afghanistan, which was later made into a Hollywood film.

Morgan Luttrell, 40, fought his share of battles too during nine combat deployments in Iraq and Afghanistan in 10 years. He is also drawing on his combat experience, but in a less glamorous fashion than his brother. He’s studying to become a cognitive scientist and is on a doctoral track at the University of Texas at Dallas. His goal is to treat veterans suffering from traumatic brain injury or post-traumatic stress disorder, the most prevalent combat injuries from the wars in Iraq and Afghanistan.

He can relate to soldiers dealing with physical and mental wounds.

He and his brother, who both stand 6-foot-5 and weigh about 230 pounds, grew up riding horses and playing football. So even before his military career he’d suffered many blows to the head and been knocked out a few times. But nothing compared to what happened to him in October 2009.

In video below, Morgan Luttrell coaches a group of employees through pushups to support the the Boots Campaign.

Luttrell was aboard an Army helicopter during a training exercise off the coast of Virginia Beach. The SEALs were training to fast-rope down onto the ship when their Black Hawk crashed into a combat support ship, killing one and injuring eight, including Luttrell.

He remembers falling out of the helicopter and hitting the top deck of ship. When the helicopter exploded, the force blew him down onto another deck. The impact broke his back in six places, and he sustained major damage to his spinal cord. He was in a body cast for about six months.

He also suffered a severe traumatic brain injury and endured sharp headaches and dizziness for months.

“Bad day at the office” is how Luttrell sums it up.

Luttrell still deployed two more times before retiring in 2014 with a medical discharge, the result of spinal cord damage suffered in the crash.

After growing up in Willis, 50 miles north of Houston, Luttrell wanted to come back to Texas. While seeking out treatment for his traumatic brain injury, he learned about the Center for BrainHealth, part of the UTD's School of Behavioral and Brain Sciences, a research institute that combined brain research with clinical intervention. The center has worked with veterans for several years.

He signed up to be part of a clinical trial. He underwent cognitive testing and received training on how to improve his ability to think abstractly, synthesize information and filter out distractions — common problems for patients with brain injuries.

It was about this time when Luttrell decided to pursue an advanced degree in cognitive science, with the long-term goal of finding treatments that could help the estimated half-million recent-war veterans suffering from PTSD, traumatic brain injuries or both. It wasn’t completely out of the blue — he had graduated from Sam Houston State with a degree in psychology and philosophy.

Luttrell realized there was so much to learn about the brain, how it worked and how it was affected by injury. He didn’t want to just wait around while doctors and scientists tried to determine the best way to treat injuries to the brain. He wanted to be part of the solution.

He recently completed his master’s degree in applied cognition and neuroscience and is in his first year of a doctoral program in cognitive neuroscience that could take about five years.

“Having Ph.D. behind your name is much like having SEAL behind your name,” Luttrell said. It gives you credibility within the scientific community in the way that earning the SEAL Trident insignia confers stature within the military community. But that’s where the similarity stops, he said.

“Getting a Ph.D. is much more difficult than becoming a SEAL,” he said. “It’s more challenging.” Knowledge of the brain changes every day. “I could do six months of research and by that seventh month everything I learned could be negated,” he said.

His academic adviser is Dr. John Hart, the medical science director at the Center for BrainHealth and a national expert on PTSD.

Needless to say, he’s never had a student quite like Luttrell. “He’s my first Navy SEAL,” Hart said. “As I said to him, I hope to train him to become a great neuroscientist, and no one will ever know he was a Navy SEAL.”

When Luttrell started on his master’s degree, Hart told him to think of it as academic boot camp. “He’s going to be treated just like anyone else,” Hart said. And he was going to work in teams with students who were much younger. Could he turn to them for help when he needed it?

“That’s a hard thing to do, to be so successful and to have to ask for help,” Hart said. “He’s had the kind of self-confidence and humility to do that.”

Luttrell says he is driven by his long-term goal to find the best treatments for veterans suffering from PTSD and traumatic brain injury. His own journey seeking help for his brain injury involved multiple institutions and treatments, so when he’d hear from veterans who needed help, he would look for funding to send them to one of the treatment places he’d been.

Now Luttrell has paired up with the Boot Campaign, a Texas-based national charity that supports veterans through the sale of its signature combat boots. “They made this their No. 1 mission, and that’s where we sit today,” he said.

ReBOOT seeks to raise funds to pay for treatment of veterans enrolled at UTD's Center for BrainHealth and with other partners helping veterans in Virginia and California, Payne said.

The country owes the veterans not only a debt of gratitude — but the chance to see the wounded made whole again.

“More than anything, we need the resources to help those identified with significant need,” Payne said.