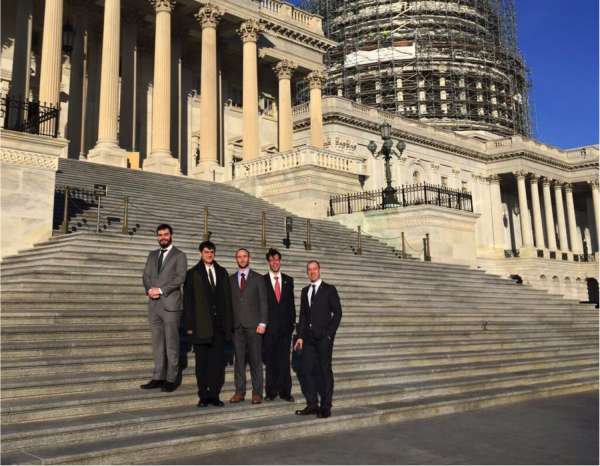 “The true cost of war — that’s what this week is about for me. That’s why I am here,” says Steve Acheson, a former Army forward observer and Iraq War veteran. Acheson, now an engineer and a farmer, speaks with a genuine honesty, indicative of his Midwestern roots. The Wisconsin native enlisted in the Army out of high school to go fight a war he truly believed in. And he’s still fighting. But this time on Capitol Hill for the warfighters no one talks about with fellow veterans, Kristofer Goldsmith, Thomas Burke, Alexander McCoy, and David Anderson.

Task & Purpose met up with this young group of veterans as they visited House and Senate offices on the Hill in early January to discuss their cause: those considered less than honorable.

The initiative, led by Goldsmith, is aimed at pushing forward legislation that’s been stagnant in the Senate since it was dropped from the Clay Hunt Suicide Prevention for American Veterans Act last year. The S.1567 bill, which was just named Fairness For Veterans bill, will reform the review board process and help veterans repeal their other-than-honorable or general discharges due to mental-health disorders related to post-traumatic stress disorder, military sexual assault, or traumatic brain injury.

“I’m not a lobbyist,” says Goldsmith, adamantly. “I’m here to help veterans get what they deserve for serving their country,” specifically a population of veterans who are usually left out of the conversation.

The less-than-honorable-discharge issue feels like it’s anecdotal,” explains Goldsmith, rather than systemic. But NPR revealed in a recent report that approximately 22,000 veterans from the Army alone have been discharged since 2009 for misconduct related to mental health injuries like PTSD, traumatic brain injury, and military sexual trauma, despite efforts to limit this. A 2012 edition of Military Law Review further acknowledged this was a wider issue as well stating, “enough data now exists to conclude that the military has essentially criminalized mental illness.”

“I loved the Army,” says 30-year-old Goldsmith, “I wanted to be a soldier since I was about 3 years old.” Getting kicked out feels like being abandoned to these young service members who willingly fought in wars when so much of the country did not — wars that are largely disconnected from the civilian population back home, making separation from the world they know and love that much more traumatizing.

So why are these men and women being forced out of the military with other-than-honorable discharges?

It is done largely to keep units combat-ready. While speaking on the Hill, Goldsmith, Burke, and Anderson all agreed, this is the essential job of a commander, especially in a time of war. They sympathized with the fact that commanders have to get troops out in the field, in good physical condition, and ready to redeploy. Troops who continually demonstrate behavioral issues are a paperwork nightmare and it is difficult for someone without proper training to delineate what is war trauma and what is not. Nevertheless, they explained, there should be a safety net in place so the decision making isn’t left entirely to the commander.

“There’s also a financial stake here,” states McCoy, a former Marine sergeant and a current student at Columbia University. McCoy was honorably discharged after serving on active duty for six years, but keeping in line with his sense of service, he now advocates for veterans transitioning home. “The correct thing to do is medically retire these individuals,” he says. But that means costing the DoD for the duration of the veteran’s life.

Related: What happens to veterans with ‘bad paper’ discharges.

But the cost seems greater to veterans as a whole. According to Military Law Review, “The military, through its discharge process, is creating huge handicaps to readjustment and reintegration into society by limiting the possibility of care and failing to at the least stabilize these warriors before their rough ejection.” For instance, it is very difficult for these veterans to find work. “An employer sees ‘general discharge’ on my paperwork and looks down and sees ‘misconduct.’ They don’t really want to talk to you after that,” explains Goldsmith. Less-than-honorable discharges also impact veterans’ access to education benefits and VA home loans.

Additionally, they have limited access to the VA healthcare system. Other-than-honorable discharges require the veteran to apply for a characterization of discharge review conducted by the VA. It is a lengthy legal process in which the VA must verify the facts surrounding the incident resulting in the discharge with the appropriate branch of service. It also requires the veteran to produce his or her own evidence surrounding the discharge, such as witness statements. This investigation can take months and means delay in access to care.

Currently, if veterans want to fight their discharge status, the burden of proof is on them to give evidence that their behavior was related to PTSD, traumatic brain injury, or military sexual trauma. For example, in Goldsmith’s case, he received a diagnosis of PTSD two months after his general discharge, and had to prove that his trauma did not occur within those two months outside the military. He had no way of doing that. The Fairness for Veterans bill, or S.1567, would put the burden of proof on the review board to investigate and prove that the behavior that led to the less-than-honorable discharge was not serviced-connected.

The Discharge Review Board process itself is also intricately complex and lengthy. It starts with a written appeal and if that doesn’t work, the veteran must appear before the board in Washington, D.C. Many of these boards lack adequately trained, mental-health personnel and combat-experienced officers who understand what war trauma looks like. Substance abuse and thrill-seeking behavior, for example, are classic symptoms of trauma, but can be perceived as general misconduct.

In Goldsmith’s case, there was only one officer on his review board in who had combat experience. He was also the only board member who voted in Goldsmith’s favor.

“This is personal for me for me as well,” says Acheson, who grew up on an organic dairy farm near Campbellsport, Wisconsin. He served in Sadr City, Iraq, running over 400 combat escort missions, ultimately being honorably discharged in 2008. He was the distinguished honor graduate in his basic training. Goldsmith was number two. That’s where the two men became battle buddies and brothers. They would later deploy to Iraq together. And come home together. It was that camaraderie and brotherhood that eventually saved Goldsmith’s life in May 2007.

“I found him,” explains Acheson. When he went to Goldsmith’s room to bid him farewell for what would have been Goldsmith’s second deployment, Acheson noticed none of his bags were packed and the room looked untouched. “I knew something was wrong immediately and called the MPs.” Hours later, they found Goldsmith lying in a field. He was soon kicked out of the Army for attempting suicide.

Goldsmith and his colleagues say they will continue the fight, despite the difficulty and exhaustion of retelling their raw and exposing stories and what they saw and did in war. There is no illusion with these veterans about what war costs. If anything, they want to bring that into the light, even if it means bringing humiliation along with it.

Thomas Burke, then a lance corporal in the Marine Corps, in Nawa, Afghanistan, February 2010.Photo courtesy of Thomas Burke

“It’s shameful for us,” says Burke. “Think of the worst thing you did and then have to retell that story over and over again.”

Twenty-six-year-old Burke was kicked out of the Marines for drug abuse a year after he returned home from Afghanistan in 2010. He was diagnosed with PTSD after his first tour in Iraq in 2008, but went on to serve in the Battle of Marjah in Helmand province because as he puts it, “That’s what Marines do. I wanted to keep fighting.”

While in a remote combat outpost in Afghanistan, Burke wandered off by himself and put the barrel of his rifle into his mouth. It was a fellow Marine who woke up concerned for his friend, which ultimately saved his life. Since getting out of the Marines, Burke says, “Six of my brothers have killed themselves.”

Burke is vocal about his experiences now, especially his experience living with PTSD. But he says talking about his other-than-honorable discharge for misconduct due to drug abuse is more difficult. There is more shame around being kicked out of an organization to which he gave his life than the war trauma he suffered as a result of his service.

In every meeting with representatives and senators, Burke is adamant: “I’m not here for myself. I’m here for those vets who didn’t have the same opportunities I did.”

He currently studies at the Yale Divinity School where he also received his undergraduate degree. Burke hopes to return to the military as a Navy chaplain where he can help young Marines going through the same traumas he faced. But he will need to upgrade his discharge status in order to do so.

What is certain is this issue is a matter of life and death for many veterans who have similar stories like Goldsmith and Burke. “This is the most vulnerable population of veterans,” says Thomas, in a meeting with Hill staffers. These are the veterans who become homeless or incarcerated and much of it is preventable.

“The perception was that they were good field Marines, bad barracks Marines,” explains Anderson, who enlisted in the Marines in 2000 and deployed to Iraq and Afghanistan. He was honorably discharged as a staff sergeant in 2013 and experienced both the enlisted and the administrative side of this issue while serving in a platoon commander slot for the Reserves. Anderson saw Marines coming home who were going to get administratively discharged due to being “trouble makers.”

“Most people just think, oh, they’re dirtbags,” he says. But he quickly realized those Marines struggling with substance abuse, explosive rage, and recklessness were also struggling with internal wars, ones that were overlooked. Anderson explains, “I thought these were isolated things, but, no this is a bigger problem.”

During their five-day visit to Capitol Hill, these young men found bipartisan support from the both the House and Senate while visiting the offices of Sen. Gary Peters, and representatives Mike Coffman, Peter King, Seth Moulton, Patrick Murphy, and John Katko, among others. While Peters will lead for the Fairness for Veterans bill in the Senate, it is still unclear who will spearhead the issue in the House.

Peters’ Fairness for Veterans bill frees up commanders from feeling the burden of deciding what is PTSD and traumatic brain injury and what is just poor behavior because there would be a fair, evidence-based review board doing a proper investigation.

However, Goldsmith and others also want to expand on the existing bill to include free access to the VA for other-than-honorable vets in order to obtain a diagnosis and get treatment right away for their service-related injury, rather than having to wait for months on a characterization review. Additionally they want to make access easier to the discharge review board rather than forcing vets to travel to Washington, D.C.

“How we take care of our veterans now will affect the next war and who enlists to fight it,” says Goldsmith, at the end of his long week in Washington, echoing a quote by George Washington.

The Fairness For Veterans bill is as much about the past as it is about the future. After 15 years of war, the cost is no doubt going to be high, not only in lives lost during combat but those that will forever be affected by the experience of war. PTSD and traumatic brain injury continue to be the signature wounds of this generation’s wars. It is imperative the military strives to understand these injuries in greater depth and to not penalize those who have already suffered.