1,000 Strangers Attend Funeral For Marine Vet With No Family

On Nov. 17, a Marine veteran received a solemn and dignified funeral as 1,000 strangers made their way past his... 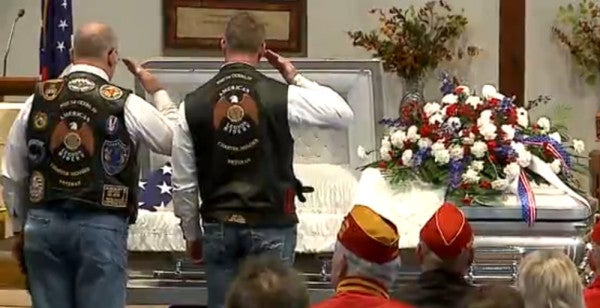 On Nov. 17, a Marine veteran received a solemn and dignified funeral as 1,000 strangers made their way past his casket, one by one, to pay their respects. Just one month earlier, when Billy Aldridge passed away at 80 years old, there was no one to come and claim his body or set his affairs in order. His funeral seemed likely to be a lonely affair. Instead, community members, veterans, and service members from every branch came forward to give him a dignified send off.

After Aldridge’s death on Oct. 14, neither the Indianapolis, Indiana, nursing home where he had lived nor the funeral home tasked with seeing to his affairs were able to reach any next of kin.

Over the next two weeks, Carrie Gee, the funeral director at Legacy Cremation and Funeral Services, scoured Aldridge’s records searching for a contact, she told Task & Purpose in an interview. Gee finally got a break after speaking with his old landlord, who said he remembered seeing a photo of Aldridge in a military uniform “with some medals” in his old apartment.

When Gee realized that Aldridge was a veteran, she reached out to the National Archives and put in a request for his records. The records revealed that Aldridge had served in the Marine Corps in the 1950s. Gee then put out a call to community members.

In addition to the funeral home where Gee works, Private Label Caskets, Memorial Park Cemetery, and Indianapolis’ police escort team worked together to provide Aldridge the funeral ceremony and service that he deserved.

Watch The WISHTV news report of the funeral. Story continues below.

“When we found out Mr. Aldridge was a veteran, we just felt we had to give him a proper and dignified burial,” said Eddie Beagles, vice president of funeral operations at Legacy Cremation and Funeral Services, in a news report by WISHTV.

The outpouring of support from the community was so great that the funeral had to be moved to a larger venue, and ended up taking place at Lawrence United Methodist Church. Even so, it was so packed that there was only standing room.

“While we do not have the circle of family and friends around Billy Aldridge today, we have a community of veterans, a community of supporters of our veterans that come to say you do not die to yourself alone,” said Ron May, a retired U.S. Navy chaplain, in a WISHTV news report.

Aldridge, who was a native of Jefferson, Indiana, joined the Marines in 1956 and served in supply. He received an honorable discharge four years later and then moved to Indianapolis.

For Gee, Aldridge’s funeral was a show of solidarity and support, not just from the community, but from its veteran and military members.

“All this support that this gentleman got, we had someone from every branch of the military,” said Gee. “They were supporting each other.”