Pfc. Gustavo Moreno was a fighter. When he enlisted in the Army, he wanted to protect America from its enemies.Instead,... 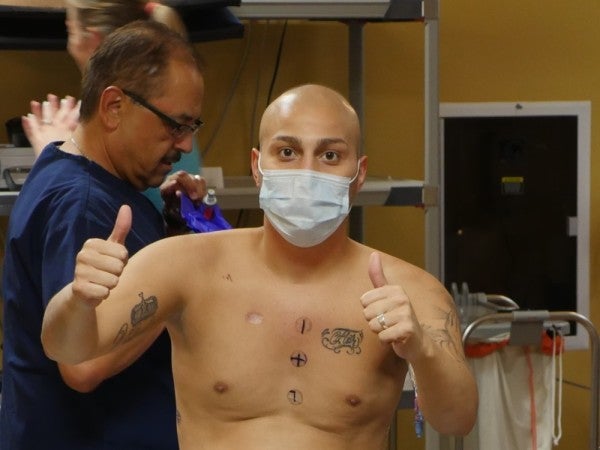 Pfc. Gustavo Moreno was a fighter. When he enlisted in the Army, he wanted to protect America from its enemies.Instead, he ended up fighting a different enemy altogether — cancer. More specifically, he was diagnosed with T-cell Acute Lymphoblastic Lymphoma, or ALL, a rare subtype of adult non-Hodgkin cancer. ALL is the most aggressive form of adult leukemia.

Moreno left for Fort Sill, Oklahoma, for basic training in October 2013 and returned home for the month of December. He then went back to Fort Sill in January 2014 for advanced individual training.

The shocking diagnosis came shortly after he blacked out while on the phone with his wife.

“I fell off the bed, went downstairs and was taken to the hospital,” Moreno said. “At first they thought it was bronchitis because I had a cough and it was hard to swallow.”

But then the doctors found a 14-centimeter mass in his trachea.

He said, “I was laughing, like I was in shock.”

Thinking only of his wife Valerie and young daughter Avalee, Moreno began the fight of his life.

Though he spent a year in chemotherapy, the mass in his throat returned and the cancer spread to his blood.

Soon after, he reached the point of needing a bone marrow transplant. There are few who donate, and Morena was unable to find a match.

As he continued fighting and waiting, his unit promoted him to the rank of specialist in a ceremony at his home on July 23, 2015.

That day was full of happiness for the Moreno family, as it was also Gustavo and Valerie’s second wedding anniversary.

Sadly, Moreno passed away later that same day. He was 20 years old.

He died at home, surrounded by family. His fight turned into a movement to help others needing life-saving help from bone marrow donors, particularly among Latinos.

According to the national Be the Match registry, it can be extremely difficult to find bone marrow matches within certain ethnic groups. While Caucasians can expect a 93% chance of a match, the odds are much lower for minorities — 73% for Asian-Americans, 72% for Latinos, and 66% for African-Americans.

Before he died, he started a bone marrow donorship campaign in San Antonio called #MarrowForMoreno.