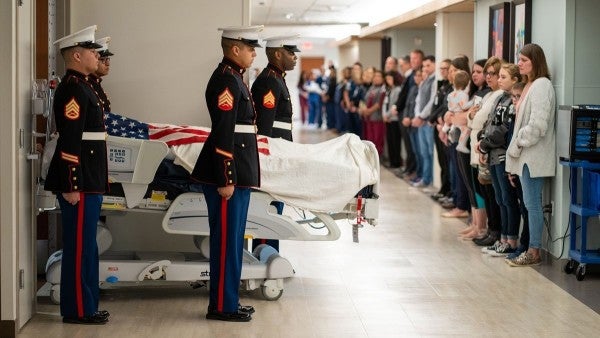 The old pastime that “there's no such thing as an ex-Marine” rang true again last Friday when an honor guard of four Marines arrived to the Baylor University Medical Center in Dallas to honor a veteran who had passed away due to complications stemming from brain cancer.

The four Marines, summoned at an hour's notice, performed a flag ceremony for Marine veteran William Preston Moore before escorting his body from the hospital room and rendering a final salute.

As reported by local NBC News affiliate station NBC 5 Dallas-Fort Worth, the honor walk was a fitting end to Moore's heroic eight-year fight against brain cancer.

According to Moore's wife Sarah, Moore had dealt with two different occurrences of medulloblastoma, a cancer few adults get and only 40% survive.

After several brain surgeries and a bone marrow transplant, Moore was in remission, but his weakened immune system could not resist a recent bout with pneumonia.

“We went in and he just wasn't doing well. He was tired. He was having labored breathing. He just looked at me, and I knew. It was done,” Sarah told NBC 5.

Sarah wanted her husband to go out with an Honor Walk, and it wasn't just the Marines who showed up to bid Moore farewell. Lining the hallways of the hospital were all the nurses, doctors and even fellow patients who had helped Moore and his family through their eight-year struggle.

“It was a really good thing for my kids to get to see that this is what their dad is … that he really is a hero not just because I say so, but that other people really believed it too,” Sarah said.