Col, Mark Visconi, who pleaded guilty in October, was recently sentenced to five years in prison and another 15 years of supervised release. 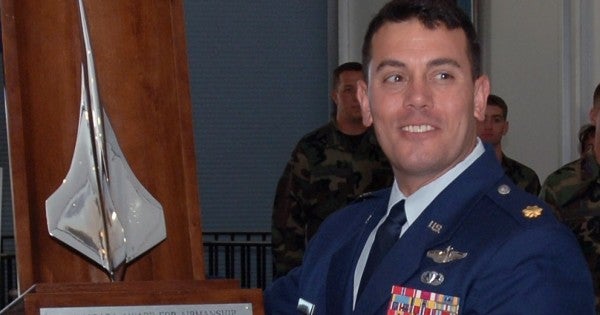 The Air Force has begun the process of removing Col. Mark Visconi from the service after he was sentenced to five years in prison and another 15 years of supervised release for receiving child pornography, officials said.

Visconi, who pleaded guilty in October, was sentenced on Jan. 31 per a plea agreement with prosecutors, according to the Justice Department. Investigators found numerous child pornography images and videos after searching Visconi's laptop.

Visconi admitted to visiting an online bulletin board operating on Tor, an anonymous online network, to download pornographic videos of young children, court records show. Visconi also admitted to using his personal iPhone to take about 441 pictures of underage girls.

“These photographs do not appear to constitute child pornography,” according to a statement of facts singed by Visconi and his attorneys.

James Phillips, one of Visconi's attorneys, declined to comment when reached by Task & Purpose on Tuesday.

Prior to pleading guilty to child pornography charges, Visconi served as chief of the Air Force's counter-drone task force and he was on track to take command of the 11th Air Wing at Joint Base Andrews, said Air Force spokeswoman Lynn Kirby.

“Now that sentencing is complete, the Air Force will begin the process to have him removed from the rolls,” Kirby said in a statement. “If approved, this will result in the loss of Col. Visconi's ability to apply for retirement or to receive any other benefit afforded for honorable service.”

Visconi's five-year prison sentence will be retroactive to Oct. 4, when he pleaded guilty, said Joshua Stueve, a spokesman for the U.S. Attorney's Office, Eastern District of Virginia.

The U.S. Bureau of Prisons has not yet decided where Visconi will serve his sentence, but the court made a non-binding recommendation that he be assigned to a prison in Colorado so he can be near his family, Stueve said.