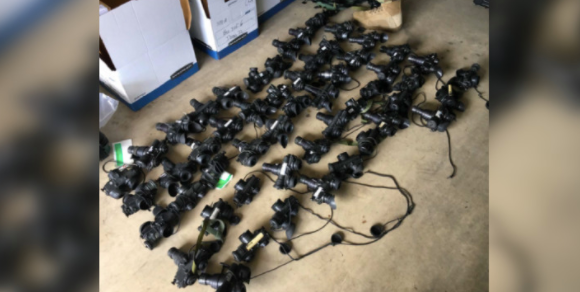 A former Texas National Guardsman from Fort Worth has been sentenced to federal prison after admitting to stealing more than $2 million worth of military equipment and selling it on the internet.

Cristal Avila, 27, and her accomplice Joseph Mora, 36, were sentenced to federal prison time and ordered to pay $2.4 million in restitution, according to a Justice Department press release. Avila was sentenced to two years behind bars, while Mora — a U.S. Property and Fiscal Office program analyst — was given three years.

Avila and Mora both pleaded guilty in August to one count of theft of government property, according to a Department of Justice press release at the time.

The pleas stemmed from a Sept. 24, 2019 event when federal agents searched Mora’s home and found “dozens of items believed to be stolen from Camp Mabry” in Austin.

The DoJ said that by pleading guilty, the two admitted to “conducting a scheme to remove large quantities of sensitive military-grade equipment, including rifle scopes, infrared laser aiming devices and thermal night vision goggles, from the facility without authorization.”

They also sold much of the stolen equipment on eBay, according to the press release.

Avila said in court records that she was “extremely remorseful for her crimes,” Army Times reported, and said that she “has no one to blame but herself for having sabotaged her chosen career.”

Gregg Sofer, a U.S. attorney on the case, said in the DOJ press release that stealing and selling military equipment “endangers our communities and the brave men and women who protect us here at home and abroad.”

“Thanks to the hard work of [Defense Criminal Investigation Service] Southwest Field Office, [Homeland Security Investigations], Army [Criminal Investigation Command], and [U.S. Postal Inspection Services], the individuals who purloined more than $2.4 million worth of sensitive military gear have been held accountable,” Sofer said. “And we can rest easier knowing that these items are not being offered up to criminals or those who would use them for nefarious purposes.”