The old maxim that “war is a racket,” has never been more true, and it’s not just big government contractors... 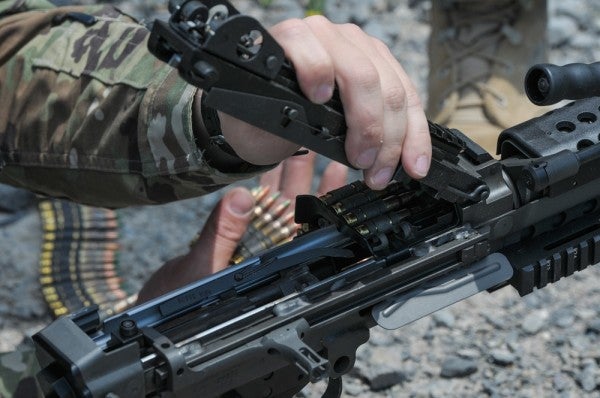 The old maxim that “war is a racket,” has never been more true, and it’s not just big government contractors getting in on war profiteering. Thanks to the Internet, you can make a buck off the spoils of war by hocking ill-gotten gear on eBay.

A group of six U.S. Army soldiers, along with two civilians, are embroiled in a scandal involving the illegal sale of more than $1 million in weapons parts and military equipment stolen from Fort Campbell, Kentucky, according to an Aug. 30 Associated Press report on the ongoing Nashville, Tennessee trial.

The soldiers were recruited through Facebook or classified ads to steal military equipment by civilians John Roberts and his business partner Cory Wilson, who purchased the pilfered gear for resale to buyers across the globe through eBay, according to the Associated Press.

The gear included machine gun and rifle parts, weapon optics, body armor, ballistic plates, helmets and other sensitive equipment. The soldiers involved were even given wish lists of gear to swipe while deployed to Afghanistan and bring home to the states to be resold.

The Fort Campbell racket reportedly operated 2013 to 2016; authorities initially got wind of the graft in 2014 after U.S. Customs and Border Protection intercepted a military flight helmet Roberts was attempting to ship overseas, and the ring was busted when the eight were arrested in October 2016, according to CNN coverage of the investigation.

The six soldiers, along with Wilson, provided testimony in exchange for plea deals, according to the Associated Press. But Roberts testified that he didn’t realize the soldiers were bringing him stolen equipment, alleging that the only things he and Wilson shared were a warehouse in Clarksville, Tennessee and “an interest in selling things on eBay,” according to the Miami Herald.

“I didn't try to hide anything,” Roberts said during the Aug. 30 proceedings, according to the Herald. “That's why I filed taxes on everything I sold on eBay. I thought it was OK.”

According to AP coverage of Wilson’s testimony, the would-be eBay arms-brokers targeted young soldiers who were short on cash, and, in all likelihood, common sense. “There were a lot of items and good money to be made,” Wilson said, calling it “fast easy money.”

One of the soldiers involved in the scandal, former Fort Campbell platoon sergeant Michael Barlow, pleaded guilty to charges of conspiracy and theft of government property. Barlow testified that the operation began small, eventually growing to encompass truckloads of military equipment for which the soldiers were paid between $1,000 and $2,000. Some of the purchases were made in broad daylight and in front of other soldiers, notes the Herald.

This isn’t the first time service members have been linked to selling stolen military goods through eBay. Between 2013 and 2015, Marine Staff Sgt. Branden Baker stole nearly $100,000 from Marine One, the military helicopter tasked with transporting the commander in chief, as Task & Purpose previously reported. He pleaded guilty to theft of government property in May.

While Wilson and the other Fort Campbell soldiers are clearly following Baker’s lead in taking a guilty plea, Roberts doesn’t seem to have caught on. During the trial, Roberts claimed he wasn’t aware he needed a license to sell the gear internationally — because, that’s the issue here, not that it was stolen, right?

Good thing he filed his taxes.