Australian naval forces working with a U.S. amphibious group have located the Marine Corps MV-22 Osprey that crashed into the... 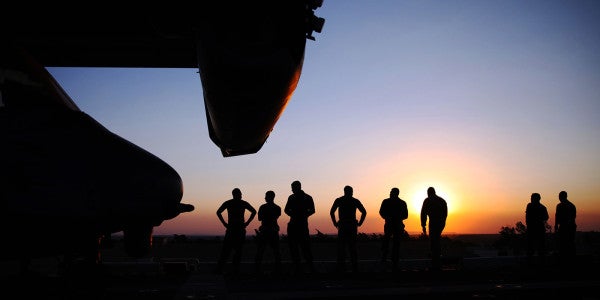 Australian naval forces working with a U.S. amphibious group have located the Marine Corps MV-22 Osprey that crashed into the Pacific on Aug. 5, but Pentagon sources say three Marines still missing after the crash are now presumed dead.

Recovery teams were expected to use remote-controlled submersible vehicles to survey the sunken aircraft before sending divers down, the Australian ministry of defense told Reuters on Aug. 7. The operation was being led by Australian Navy divers “in conjunction with the U.S. Marine Corps and U.S. Navy aboard USS Bonhomme Richard,” a spokesman for III Marine Expeditionary Force said Monday in a statement.

Separately, defense officials told Fox News that the last three missing Marines were dead and their next of kin had been notified. The names of those three were expected to be released later Monday or on Tuesday.

The cause of the tilt-rotor aircraft’s crash is still unclear. The Osprey was part of a U.S.-Australian naval exercise, Talisman Sabre 2017, involving the Bonhomme Richard expeditionary strike group and 31st Marine Expeditionary Unit between late June and early August. According to initial reports, the aircraft was on a landing approach to USS Green Bay during a training exercise when it crashed into the Pacific. Green Bay’s fantail helo deck was reportedly damaged, too.

The aircraft, assigned to 31st MEU’s Marine Medium Tiltrotor Squadron 265, carried 21 Marine passengers and a crew of 5. All but three occupants were rescued in the hours after the crash. After more than 24 hours of searching for those three Marines, the service announced Sunday morning that it was suspending rescue operations and shifting to recovery efforts.

“The circumstances of the mishap are currently under investigation,” a spokesman for III Marine Expeditionary Force said.

This post has been updated with new information on the three missing Marines.