Two American service members sustained minor injuries as a result of a U.S. military aircraft crash at a coalition base … Continued 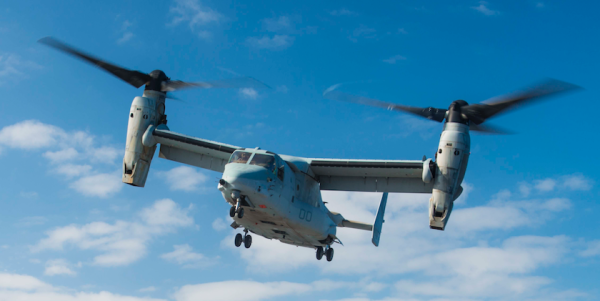 Two American service members sustained minor injuries as a result of a U.S. military aircraft crash at a coalition base in Syria on Sept. 29, according to U.S. Central Command.

Military officials told Marine Corps Times that the aircraft was a Marine MV-22B Osprey, which can transport up to 24 personnel. The location of the base where the crash occurred has not been disclosed.

“The two injured service members were evaluated for non-life threatening injures and quickly transported to a medical treatment facility, where they were seen and released,” CENTCOM announced in a statement on Sept. 29.

CENTCOM said the Osprey executed a hard landing. No other casualties were reported, and an unidentified official told Fox News that “it’s a miracle so few were injured.” Fox News also reports that the aircraft was “completely destroyed.”

The Department of Defense has not said what caused the crash, and the incident is under investigation, CENTCOM told Task & Purpose. Military officials told Marine Corps Times that no enemy fire was involved.

Three U.S. service members — a Marine aviator and an infantryman — were killed on Aug. 5 when their MV-22B Osprey crashed off Australia’s eastern coast.

The crash comes amid growing concerns over deadly aviation mishaps for the branch. Sixty-two Marines have died in aircraft accidents in the last six years, according to Breaking Defense.