2 US Soldiers Injured In Black Hawk Crash In Afghanistan

Two U.S. military personnel suffered minor injuries after their HH-60 Black Hawk helicopter crashed in Afghanistan on the morning of... 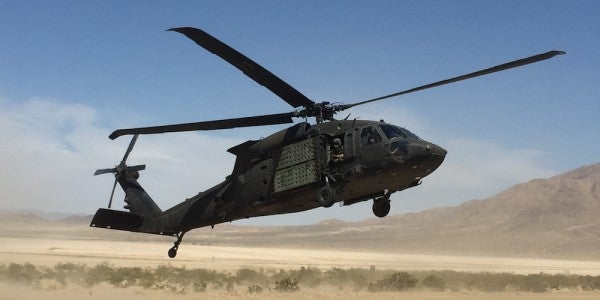 The helo “suffered a mechanical issue” during operations near Achin in the country’s eastern province of Nangarhar, making what U.S. Central Command officials characterized as a “hard landing.” Rescue personnel managed to safely evacuate the crew, and ORS is in the process of recovering the downed copter.

The Nangarhar province has become a stronghold for Afghan ISIS offshoot ISIS-Khorasan, and a target for increased U.S. special operations forces activity since the Department of Defense dropped a 21,600 pound GBU-43 Massive Ordnance Air Blast Bomb (or “mother of all bombs”) on an ISIS-K position in April.

The Taliban initially attempted to claim responsibility for the crash, asserting in a statement that militants “opened fire on the helicopter during its landing around 2 a.m., killing everyone aboard and foiling an attempted raid,” according to Stars and Stripes. That claim appears to be hot garbage.

The incident, though relatively minor, underscores a growing problem: Poor upkeep and maintenance of the NATO coalition’s fleet of Black Hawk attack helicopters will likely result in more mechanical failures not just in Afghanistan, but on battlefields across the Middle East and North Africa where U.S.-led forces focus on beating back the rising tide of Islamic militants.

Of course, this assessment primarily applies to the Army; the U.S. Air Force, Navy and Coast Guard all use modified H-60 Black Hawks for various operations. But given the essential nature of the attack copter to counter-insurgency operations in Afghanistan and beyond — as well as the cultural symbolism of a downed Black Hawk, thanks to the 1993 Battle of Mogadishu and journalist Mark Bowden’s account of the campaign in Black Hawk Down — the Army may want to take a harder look at ensuring that mechanical failures like the one that occurred over Achin don’t happen again.

CENTCOM and ORS did not immediately respond to request for comment from Task & Purpose. We will update this story with more information as it becomes available.