On Friday, the Department of Defense announced a 15-6 investigation into the deaths of two Army Rangers killed during a... 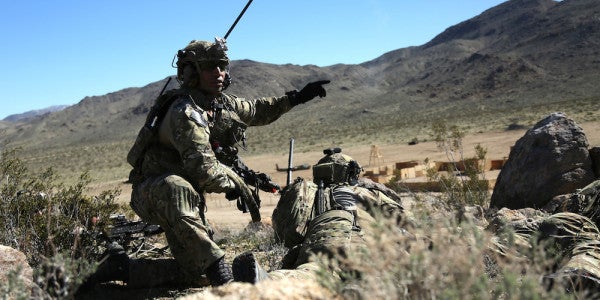 On Friday, the Department of Defense announced a 15-6 investigation into the deaths of two Army Rangers killed during a grueling three-hour firefight in the eastern Nangarhar province of Afghanistan, citing “friendly fire” as a possible cause of death, according to a statement released by U.S. Forces-Afghanistan.

But eyewitnesses say otherwise. More than a dozen Rangers assigned to a special operations task force with direct knowledge of the engagement told Task & Purpose that the claim was “100% false.”

“This is tainting the memory of the fallen with unneeded controversy,” one service member told Task & Purpose.

While the Pentagon often initiates investigations whenever U.S. troops are killed in combat, a Friday statement from U.S. Forces-Afghanistan in Kabul specified that “there is a possibility of friendly fire in this case.”

On Friday, Pentagon spokesman Capt. Jeff Davis said that if friendly fire was a factor in the deaths of the two Rangers, it was likely unintentional, ruling out the possibility that the Rangers were killed in a “green-on-blue” attack by Afghan commandos whom the Rangers were attached to.

But Rangers assigned to a special operations task force say the two soldiers were killed by ISIS fighters. “There was no friendly fire. They were killed while engaged with enemy fighters in direct combat,” one Ranger told Task & Purpose under the condition of anonymity, “We took casualties. We killed a bunch of dudes.”

The Rangers killed were identified by the Pentagon as Sgt. Joshua P. Rodgers, 22, and Sgt. Cameron H. Thomas, 23.

The primary target of the raid was Abdul Hasib, the self-described “Emir” of the ISIS faction who “exercised command and control over operations involving ISIS-K and their connections with the larger ISIS network,” according to Davis.

Around 10:30 pm local time, Rangers were inserted into the Achin district of the Nangarhar province alongside Afghan Special Security Forces. The firefight took place less than a mile from where the U.S. Air Force dropped the 21,600-pound Massive Ordnance Air Blast bomb on April 13.

As of Friday, it was unclear whether Hasib was killed during the night raid.