DoD Official On The Campaign Against ISIS: ‘The Sh*t Is About To Go Down In Raqqa’

With the Iraqi city of Mosul almost entirely rid of ISIS forces, the U.S. military is gearing up to take... 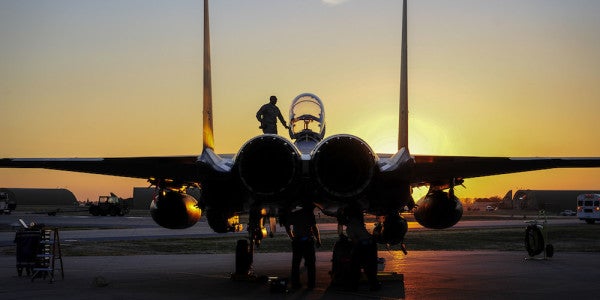 With the Iraqi city of Mosul almost entirely rid of ISIS forces, the U.S. military is gearing up to take on the terrorist group’s Syrian capital of Raqqa, arming Kurdish militias and other local forces for an all-out assault that’s expected to commence in days, not weeks.

“The shit is about to go down in Raqqa,” one anonymous DoD official told the Washington Examiner on June 2. “I would expect to see the assault begin in the coming days.”

Pentagon officials told the New York Times on May 31 that the U.S. had started distributing small arms and anti-tank weapons to the Kurdish militias, who have fought alongside U.S-led coalition forces against ISIS since 2014. The weapons include “small arms, ammunition, heavy machine guns” and anti-tank shells typically deployed against “heavily armored vehicle-borne I.E.D.s,” per the Times.

The inclusion of anti-tank shells is of particular interest. Task & Purpose recently reported that among the shoddy DIY ammo dumps and supply caches seized from fleeing ISIS fighters in Mosul were heavy “suicide” trucks and tractors, decked out in homemade armor and primed for kamikaze missions.

“The [Syrian Democratic Forces are] poised around Raqqa. They are within 3 kilometers [1.8 miles] from the north and the east, and are about 10 kilometers [6 miles] from the city to the west,” Col. Ryan Dillon, a military spokesman in Baghdad, told reporters in an email, noting that regional militias “have given instructions to the citizens of Raqqa to vacate.”

The final assault on Raqqa has been a long time coming.

In early March, U.S. Marines manning M777 howitzers and convoy of Stryker armored fighting vehicles rolled up on nearby villages to establish fire support bases on the outskirts of ISIS’s de facto Syrian capital. The move was, as the Washington Post reported, reminiscent of the tactics utilized by military personnel downrange during the height of the U.S. wars in Iraq and Afghanistan, and DoD strategists were exploring plans to send as many as 1,000 U.S. combat troops into Syria on the heels of the new firebase.

One week later, a fleet of U.S. helicopters backed by Apache gunships and Marine howitzers deposited 500 SDF fighters and U.S. military advisers at a strategically important dam and airfield 25 miles west of Raqqa. The incursion was reportedly the first time the U.S. military had conducted an air assault in conjunction with local Syrian forces, and a coalition spokesman characterized the mission as a “daring assault behind enemy lines.” Another contingent of artillery-toting Marines would arrive in May.

“Ultimately we're isolating Raqqa and we are going to, at a time that our partners choose, move in and liberate that city,” U.S. military spokesman Col. John L. Dorrian told reporters in Baghdad in April following the buildup of U.S.-backed coalition and SDF forces over previous weeks

The gradual liberation of surrounding villages and strategic military infrastructure surrounding Raqqa seems to fit nicely with the “annihilation campaign” ordered by President Donald Trump and publicly described by Secretary of Defense James Mattis in May: By encircling enemy strongholds, beleaguered ISIS forces are left no avenue to escape or regroup.

Trump’s decision to arm Syrian Kurds, despite pushback from NATO ally Turkey, signals a U.S.-led coalition angling for a rapid liberation of Raqqa, in contrast to the protracted eight-month siege of Mosul led by Iraqi security forces. The Pentagon has increased the tempo of air strikes and special operator raids against terrorist enclaves since Trump assumed office in January, but a speedy seizure of Raqqa might bring the death blow to ISIS’s “caliphate” that Trump promised on the 2016 campaign trail.