The Siege of Raqqa Is Almost Over — And ISIS Lost

Last June 6th, the 73rd anniversary of the D-Day invasion that turned the tide of World War II in favor... 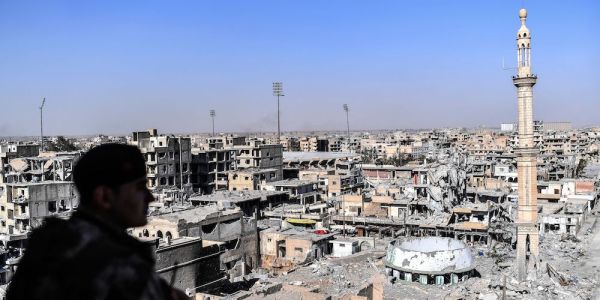 Last June 6th, the 73rd anniversary of the D-Day invasion that turned the tide of World War II in favor of the Allies, the U.S.-led coalition to defeat ISIS launched its final siege on the group’s Syrian capital of Raqqa — and nearly 14 weeks later, victory is nigh.

Military leaders with Kurdish-led Syrian Democratic Forces told the Associated Press on Oct. 17 that the U.S.-backed militias had “liberated” the northern city from ISIS militants after a grueling block-by-block campaign. According to SDF spokesman Brig. Gen. Talal Sillo, there “are no longer clashes” in the so-called “capital of terrorism.”

Full-blown “victory” might be a bit premature: While the SDF fighters on the front lines of the three-month siege were quick to declare victory, a U.S. spokesman with Operation Inherent Resolve tweeted on Oct. 17 that regional allies currently controlled just 90% of Raqqa, which remains riddled with landmines and is subject to ongoing clearing operations by SDF forces.

“We can confirm that more than 90% of Raqqa is in SDF control, and they continue to make steady progress in defeating ISIS and fully liberating the city,” Operation Inherent Resolve told Task & Purpose in a statement. “The Coalition will continue to support our proven SDF partners in the fight against ISIS until they are completely defeated in Raqqa and throughout the region utilizing all intelligence assets, precision strikes, and combat advice.”

A member of the Syrian Democratic Forces (SDF), backed by US special forces, holds their flag at the iconic Al-Naim square in Raqa on October 17, 2017. US-backed forces said they had taken full control of Raqa from the Islamic State group, defeating the last jihadist holdouts in the de facto Syrian capital of their now-shattered 'caliphate'.Photo via Bulent Kilic/AFP/Getty Images

The formal conclusion of the Raqqa siege would cap a remarkable turnaround in the multinational anti-ISIS campaign. Almost exactly one year ago, on Oct. 16, 2016, Iraqi Security Forces launched a pitched eight-month battle to expel the ISIS from the militants’ stronghold of Mosul, the heart of its so-called caliphate. OIR declared victory in Mosul on July 10, less than two weeks after ISF troops seized the 850-year-old Grand al-Nuri Mosque, where ISIS has proclaimed the formation of its so-called “caliphate” almost exactly three years earlier, in June 2014.

The peace settling over the Syrian city, rocked by a deluge of American munitions amid the intensifying bombing campaign against ISIS, appears to be real and lasting. On Oct. 14, days before SDF declared victory, local officials in Raqqa reported that ISIS fighters were brokering deals with civil servants to “leave the city with a number of human shields” like cowards, the Guardian reported.

Video by CBS News on Oct. 16, hours before the SDF announcement, captures haggard fighters celebrating in the streets:

“ISIS is finished in Raqqa they told us after hundreds of ISIS extremists surrendered over the weekend,” Holly Williams reporting. pic.twitter.com/41nmGvW9hF

But the big question facing the U.S.-led multinational coalition and its regional partners is simple: Now what? As Task & Purpose’s Danny Leffler reported in June, nobody in the executive or legislative branches has a clear roadmap for the Pentagon’s continued military involvement in Syria outside of “security, planning, and required support to the government of Iraq and appropriate authorities in Syria” — a troublingly vague proposition, given the complicated latticework of alliances and grudges that have come to define the six-year civil war and expanded it into a geopolitical cage match for regional powers.

“[I’ll] leave it to the administration to see if they’ve got an endgame,” Rep. Tom Cole, Republican from Oklahoma, told Task & Purpose in June. “Nobody I’m aware of in Congress has a clear idea about what that endgame will be.”

Related: The US Has No Long-Term Plan In Syria, And That’s Dangerous »

The question of the Pentagon’s future in Syria, however, can wait: For the Raqqa Syrians inching towards liberation after years of oppression under the ISIS “caliphate,” there’s still work to be done to totally rid the city of the group. According to the Guardian, some “300 to 400” militants remain holed up in the city’s narrow latticework of streets and alleys — and according to local officials, there are no ambiguities surrounding the endgame for those fighters who have terrorized Raqqa for years.

“[ISIS] have 400 hostages with them — women and children — in the national hospital,” Raqqa Civil Council chief Omar Alloush told the Agence France-Presse. “The foreign fighters have two choices: either surrender or be taken out.”