The much-anticipated siege of Raqqa is officially underway, with Syrian and Kurdish militias backed by American military advisers and U.S.-led... 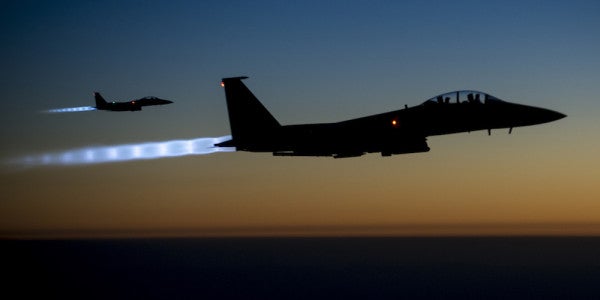 Expunging ISIS fighters from the Syrian city may represent a symbolic blow against the “caliphate,” but if it's anything like the months-long effort to reclaim the Iraqi stronghold of Mosul, the U.S.-led coalition is in for quite the fight. And thanks to the events of the past few days, the biggest obstacles to clearing the Syrian city of its death cult may have nothing to do with ISIS at all.

New Middle East squabbles around an old U.S. base in Qatar

First, the Pentagon’s escalation of airstrikes since President Donald Trump took office have already yielded a new wave of civilian casualties that threaten to delegitimize OIR and inspire a new generation of extremists. OIR has in recent months reaffirmed its commitment to deploying precision guided munitions (PGMs) to minimize collateral damage, and of the more than 84,000 weapons deployed by coalition aircraft as of May 29, around 90% were PGMs. But civilian casualties have become a regular fixture of Trump-era bombing runs. Even the OIR airstrikes that heralded the beginning of the Raqqa siege reportedly killed innocent civilians attempting to flee from ISIS themselves.

Second, this week’s sudden diplomatic imbroglio between Gulf states has brought an air of uncertainty into the U.S.’s future operations across the Middle East. Qatar, a strategic yet problematic U.S. ally in the region, has been isolated over the last few days by Arab powers like Saudi Arabia, Egypt, the U.A.E., and Bahrain over its support of Islamist organizations like the Muslim Brotherhood and the Iranian government. But as a home to Al Udeid Air Base, a crucial CENTCOM installation that sees aircraft taking off and landing every 10 minutes, 24 hours a day, Qatar is a major operational hub for OIR forces.

Could the supply of U.S. bombs shrink?

The Arab states’ sudden border closures initially presented a logistical problem. Tiny Qatar, usually dependent on its vast oil wealth to lavish its citizens in foodstuffs, lost 82 percent of its Gulf imports thanks to sanctions. Could these geopolitical tensions disrupt the flow of the right type of those Mattis-approved precision-guided munitions to rapidly shrinking stockpiles deployed out of Al Udeid and other regional bases ahead of another ramp-up in bombing sorties?

Air Forces Central Command and CJTF-OIR officials both told Task & Purpose that the unfolding drama in the Gulf has thus far had “no impact” on operations, with bombing sorties “continu as planned.” According to AFCC spokesman Lt. Col. Damien Pickart, OIR has developed a “well-refined process in place that mitigates single points of failure in the replenishment of our theater munition stocks,” ensuring a steady flow of munitions and equipment to Al Udeid personnel.

As it turns out, logistics isn’t a major problem: According to AFCC spokesman Lt. Col. Damien Pickart, only 17% of the 156,651 sorties flown by coalition aircraft between the start of OIR in August 2014 and June 5 originated at Al Udeid. (Most of those were refueling missions carried out by the 379th Air Expeditionary Wing’s KC-135 Stratotanker; fewer than 2% of all strike missions since August 2016 started at the base.) And those missions have actually decreased since around the time Trump took office. Only 9% of OIR sorties flown since January 1 took off from Al Udeid.

“What accounts for the perceived drop is due to a combination of factors, including the repositioning of aircraft at different operating locations throughout the AOR in the past year,” Pickart told Task & Purpose.

Operations depend on diplomacy

Al Udeid’s importance derives not just from raw air power, but the $60 million Combined Air Operations Center (CAOC) that manages air operations across Iraq, Afghanistan, Syria and 18 other countries. To keep that crucial cog in the Raqqa war machine turning, President Trump needs to be a serious diplomat.

The diplomatic crisis in the region was sparked by a $1 billion hostage payment from the Qatari government to an al Qaeda affiliate and Iran to — I kid you not — release a royal falconry party. But it was precipitated by Trump’s May speech in Riyadh, the Saudi capital, calling for a hard line against Islamist terror, including regimes that support and fund terrorism like Iran. The Saudis echoed Trump’s call in a June 5 statement. And in a series of tweets on June 6, Trump appeared to align himself with the Gulf states against Qatar without fully realizing its strategic importance to his campaign promise of “bombing the shit” out of ISIS:

During my recent trip to the Middle East I stated that there can no longer be funding of Radical Ideology. Leaders pointed to Qatar – look!

So good to see the Saudi Arabia visit with the King and 50 countries already paying off. They said they would take a hard line on funding…

…extremism, and all reference was pointing to Qatar. Perhaps this will be the beginning of the end to the horror of terrorism!

Sure, CENTCOM has reaffirmed that it has “no plans” to change its posture in Qatar, despite the diplomatic kerfuffle and the commander-in-chief’s unhinged tweets. But the U.S. government has been headed for a reckoning with the double-dealing Qataris for years — with the closure of Al Udeid, a deterrent to other Arab powers intent on shitting all over Qatar — as a bargaining chip.

"I can't help you with that," Pentagon spokesman Capt. Jeff Davis said in response to a question.
https://t.co/9gwIXv6xlq

The decline in OIR sorties out of Al Udeid in recent months may reflect hedging on the part of DoD planners. Relocating the crucial CAOC at the very start of an intense campaign against a valued target isn’t great for U.S. strategic interests. But if Trump keeps tweeting, it might be on the table.

With the siege of Raqqa underway, Mattis and U.S. commanders stationed across the globe face two risk factors that could potentially sink the strategically and symbolically essential liberation of the Syrian city. One is unhinged, erratic, heavily armed, and full of delusions. The other is ISIS.