Five major Arab powers severed diplomatic ties with Qatar on June 5, a move that could impact one of U.S.... 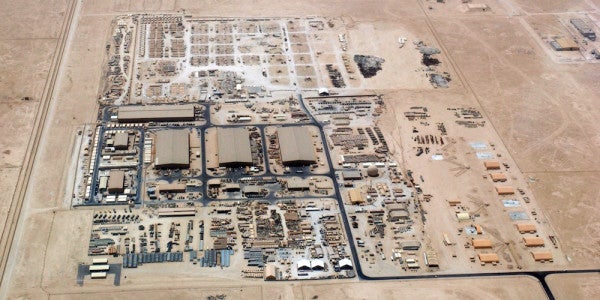 Five major Arab powers severed diplomatic ties with Qatar on June 5, a move that could impact one of U.S. Central Command’s most important overseas airbases — as well as the U.S.-led air campaign against ISIS militants in Iraq and Syria.

Saudi Arabia, Egypt, the United Arab Emirates, Bahrain, and Yemen (joined by one of Libya’s regional governments and, uh, the Maldives) cut ties with the tiny peninsular monarchy over its government’s “alleged support for Islamists and Iran,” Reuters reported. The sudden isolation is jarring for citizens of Qatar, a nation slightly smaller than Connecticut that’s remained dependent on neighbors for important resources — the New York Times notes that 40 percent of Qatar’s food is imported from Saudi Arabia.

But the future of Qatar’s security relationship with the U.S. is also in doubt at the moment. And thanks to a single military base, the future of Operation Inherent Resolve may rise and fall along with that relationship.

Qatar is home to Al Udeid Air Base, CENTCOM’s forward headquarters in the Middle East and a crucial hub for the U.S. air campaign against ISIS. Home to 11,000 U.S. and coalition service members and up to 120 aircraft — including the 379th Air Expeditionary Wing’s legendary combat airpower and, as of 2016, B-52s dropping bombs on suspected jihadists — the base is home to a $60 million Combined Air Operations Center (CAOC) that oversees U.S. airpower in Iraq, Syria, Afghanistan, and 18 other nations throughout the region.

Combined Air Operations Center (CAOC) at Al Udeid Air Base, Qatar, provides command and control of air power throughout Iraq, Syria, Afghanistan, and 17 other nations. The CAOC is comprised of a joint and Coalition team that executes day-to-day combined air and space operations and provides rapid reaction, positive control, coordination, and de-confliction of weapon systems.Photo via DoD

The Department of Defense stated on June 5 that there were “no plans” to realign its military posture in Qatar amid the diplomatic turmoil in the region. Speaking to reporters that day, Secretary of Defense James Mattis stated he was “positive there will be no implications” for the U.S. military.

According to AFCC spokesman Lt. Col. Damien Pickart, Qatarpalooza has not had an immediate effect on ongoing air operations as part of OIR.

“There has been no impact to our operations today and flights continue as planned,” Pickart told Task & Purpose. “The United States and the Coalition are grateful to the Qataris for their longstanding support of our presence and their enduring commitment to regional security. Al Udeid Air Base plays a critical role in the fight against ISIS and our operations across the region.”

CENTCOM has long relied on new GPS precision guidance kits to minimize civilian casualties, which have rankled the international community as President Donald Trump has ramped up airstrikes in recent months. Asked how the Qatari diplomatic crisis might affect guided-munitions stockpiles used for OIR bombing campaigns, a CENTCOM spokesman did not immediately respond to request for comment.

Airmen with the 379th Air Expeditionary Wing Safety Office weapons safety section pose for a photo at Al Udeid Air Base, Qatar, April 14, 2017. As weapons safety Airmen, their primary focus at Al Udeid AB is to give safety insight on the transportation, storage and handling of explosives.Photo via DoD

Al Udeid has enjoyed an uptick in operational tempo, thanks to President Barack Obama’s preference for airpower and special operations personnel in waging war against terrorists. As of May 29, U.S. and coalition aircraft had deployed 84,139 munitions against ISIS targets as part of OIR, 90% of which were precision GPS-guided bombs. According to AFCC, aircraft take off and land on Al Udeid’s runways every 10 minutes, 24 hours a day, for bombing sorties and reconnaissance missions above the battlefields of Iraq and Syria.

But while the $1 billion base has, according to the Congressional Research service, “facilitated gradually deeper cooperation” between Qatar and the U.S. military since its construction after Operation Desert Storm, it may now become a bargaining chip for the U.S. amid geopolitical pressure on the tiny nation. Amid rising concerns over Qatar’s pro-Islamist activities, defense officials have floated the idea of relocating Al Udeid personnel in a symbolic blow to the Qatari security situation.

Time will tell. With U.S. forces bracing for a protracted siege on the de facto Syrian ISIS capital of Raqqa — and Mattis’ demand for billions in new munitions amid OIR-induced stockpile shortages — it’s unlikely that Pentagon will up and bail from Al Udeid anytime soon. But if shit truly hits the fan between Qatar and its Arab neighbors, CENTCOM may be on the lookout for a new foothold in the Middle East.