Somewhere in the bowels of the Pentagon’s D-ring, there’s one fierce — and full — gift locker. So we’re led... 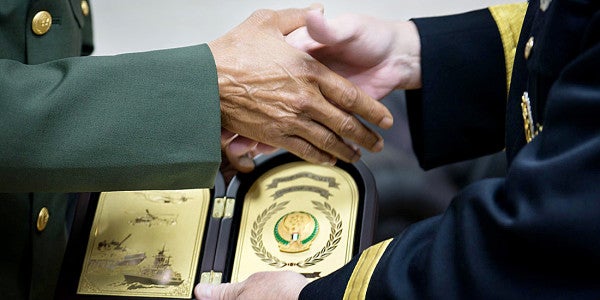 Somewhere in the bowels of the Pentagon’s D-ring, there’s one fierce — and full — gift locker. So we’re led to believe by Military Times’ Leo Shane III, who this morning published a listing of all the luxe gear and weird pricey presents given to U.S. military brass in 2015 and 2016 by their foreign counterparts — $170,000 worth.

“I fear the Greeks, even when they bear gifts,” a priest of Troy is said to have told his dumb countrymen before they dragged a beautiful gigantic Greek equine statue into their city. You know how the story of the Trojan horse ends, of course. On the other hand, there’s that other old cliche: “Don’t look a gift-horse in the mouth.”

DoD regs apparently lie somewhere between those two truisms: If you’re a uniformed service member, or the civilian boss of a bunch of service members, you can accept gifts. But if they’re worth more than $375 (or, you know, bugged with a spy transmitter), you can’t keep ’em: They get reported, logged, and stuffed in storage or a museum.

Here’s a quick rundown of some of the bizarre (but expensive!) shit your brass got gifted from foreigners in the recent past:

Watches, so many fancy fancy watches

The Bahraini crown prince gave one admiral a $15,600 Rolex oyster perpetual wristwatch (which the admiral, apparently, paid out of his own pocket to keep). Qatar’s defense minister gave a DoD civilian a pair of mother-of-pearl men’s and women’s Concord watches worth $12,000. West Point’s superintendent got a pair of Cartier his-and-her watches from the Qatari ambassador; they’re now on display outside the supe’s office at USMA’s Taylor Hall. Watches seem to be the pointless expensive gift of choice for most foreign dignitaries: Raymond Weil, Omega, Movado, Gucci… even a Breitling quartz-movement “lady watch” for the commander of of CJTF-Horn of Africa from King Abdullah of Jordan. The king of Jordan can’t even spring for a non-battery-powered watch? Come on.

A rug. But it’s probably an evil rug

So maybe you don’t think it’s remarkable that Gen. John Nicholson, the head of U.S. forces in Afghanistan, got a “large hand-made carpet” worth somewhere south of $1,800. But what if I told you it was a gift from Abdul Rashid Dostum, an Uzbek-born Afghan vice president, formerly an ex-communist ex-Northern Alliance gangster who’s famous for flipping sides, massacring prisoners, bulldozing evidence, and a bunch of other scary crap? Given Dostum’s track record, the chances are halfway decent that Nicholson’s rug had a body rolled up inside it at some point. Naturally, it’s been “retained for official display” at the U.S. Forces-Afghanistan headquarters.

I really have no clue what the chief of staff of the German air force was thinking when he got this for his U.S. counterpart, Gen. Mark Welsh. What did Welsh give him in return? A painting of the Hindenburg exploding?

Presented to Joint Chiefs Chairman Gen. Joseph Dunford by the wife of a senior Colombian military commander. Sure, why not. She also got him a cheese-serving set and a “sterling silver plaque with a repousse design of a young female wearing head cover, hands in prayer position and a halo,” which I think is bureaucratese for “a fancy picture of the Virgin Mary.”

Say you’re a senior U.S. defense attache at the embassy in Beirut. The commander of Lebanese forces gives you an iPad with an offensively tiny hard drive. Do you log onto wifi and store your stuff in the cloud? Better you should do what Richard Quirk did in late 2015 and send that sucker into the General Services Administration.

As the head of U.S. Air Forces Central Command out of Qatar’s Al-Udeid Air Base, it’s Lt. Gen. Charles Brown’s job to rain fire down on Syrian baddies. And apparently it was the Qatari military chief’s job to make it rain presents on Brown: In addition to a phone, two Chanel watches, and a gold jewelry set, Brown received a new wallet and carry-on luggage. Everything you’d need to skip the country! But instead, Brown just kept doing his job and sent all the swag to the General Services Administration. Must be an Android guy.

Two tickets to the Wimbledon finals

Gen. Brown fared pretty nicely with this gift from the Royal Air Force’s commander. (Mental note: must do more joint work with the Brits.)

Does Adm. John Richardson, the chief of naval operations, even golf? Ha ha, just kidding: He’s an admiral! And from one admiral to another — the other in this case being Kuwait’s CNO — Richardson apparently needs to work on his short game… in style. Too bad he’s just holding on to the club for an office display.

Okay, so Dunford’s wife’s name is Ellyn; that’s easy enough to find out. Still, would you not feel ooky if the chief of staff of the Egyptian military (and his wife) kicked you a personalized piece of jewelry for your spouse? I’m all for thoughtfulness, but not crazy about the thought behind it being “we googled your wife.” The Joint Chiefs of Staff have their own gift locker in E ring, but this present now languishes in the Pentagon’s foreign gift locker, one ring and three floors away. Just saying.

As an assistant defense secretary for Middle East affairs, Andrew Exum got a lot of gifts he couldn’t keep, but there’s only one he really misses: “6 knives, 6 forks, 6 spoons, all having handles of white plastic in the shape of birds with red crest,” from the Lebanese government. Yeah, he’s kind of a nerd like that.

Apparently the Pakistani army chief of staff loves gifting gilded MP5s: Gen. Lloyd Austin, then the head of U.S. Central Command, got one, and so did Gen. John Campbell, then head of U.S. Forces-Afghanistan. Both are part of museum displays now; Campbell’s gun is listed as “inoperable,” while Austin’s gun came from a “Pakistani ordnance factory,” which basically means the same thing.

If the Philippine military staff was trying to tell Ash Carter something with this and the accompanying “wood figure depicting a female with a top knot on head,” it’s beyond us. Maybe Carter missed the message, too; he stashed ’em away in the Pentagon locker, room 5D333.

Jointness with Mexico has its perks: Adm. Phil Davidson got a $400 bottle of Casa Dragones from the Mexican navy secretary, while Brig. Gen. Joseph Whitlock scored $1,000 worth of Cuervo Reserva and Herradura from the Mexican defense secretary. Where’d all that dear hooch go? Whitlock’s was returned to the Pentagon for use at a “special event”; Davidson’s has been “retained for official use.” Stay thirsty, flag officers.